Rachel Louise Carson (born May 27, 1907 – died April 14, 1964) was an American marine biologist and nature writer. Carson worked for 15 years as a biologist, scientist and editor in the U.S. Bureau of Fisheries and then the United States Fish and Wildlife Service. Her books were very important in helping the environmental movement grow. She was famous for writing Silent Spring. She also wrote a set of three books about the ocean and what lives in and around it.

Silent Spring caught the attention of many Americans. Before this not many worried about environmental problems and conservation. The book looked at problems with DDT and other pesticides (chemicals that kill pests, like mosquitoes and flies). It was thought these pesticides were safe, but they were actually causing many birds to die. DDT stayed in insects and fish which were eaten by birds. The birds then laid eggs with thin shells that would break. Some birds, like the Bald Eagle almost disappeared from the United States. In her book Carson said that without changes in how we use pesticides, there may not be birds left at some time in the future. Instead of hearing birds sing in the spring, it would be quiet, and that is how the book got its title.

This book led to a change in the national pesticide policy and a ban on DDT and some other pesticides. This new grassroots environmental movement, inspired by the book, led to the creation of the Environmental Protection Agency. After her death, Carson was awarded the Presidential Medal of Freedom by Jimmy Carter. There is a National Wildlife Refuge in Maine named after her. 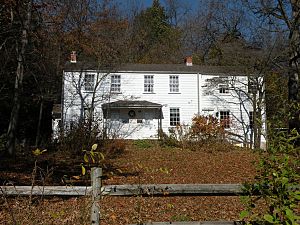 Rachel Carson was born on May 27, 1907 in Springdale, Pennsylvania and grew up on a family farm. It was on the Allegheny River, near Pittsburgh. Carson liked to read, and was a talented writer from an young age. She also spent a lot of time exploring around her 65-acre (26 ha) farm. She began writing stories (often with animals in them) at age eight, and had her first story published at age eleven. She liked to read the St. Nicholas Magazine, which published her first stories. It also published stories by Beatrix Potter, and the books of Gene Stratton Porter, Herman Melville, Joseph Conrad and Robert Louis Stevenson. The natural world, particularly the ocean, was a common part of her favorite books. Carson graduated high school in 1925, at the top of her class of forty-four students.

At the Pennsylvania College for Women (now known as Chatham University), as in high school, Carson was a bit of a loner. She originally studied English, but switched her major to biology in January 1928. She continued writing in the school's student newspaper. Though accepted to graduate school at Johns Hopkins University in 1928, she had to remain at the Pennsylvania College for Women for her senior year because of money problems. She graduated magna cum laude (highest honors) in 1929. After a summer course at the Marine Biological Laboratory, she continued her studies in zoology and genetics at Johns Hopkins in the fall of 1929.

After her first year of graduate school, Carson worked in a laboratory with rats and Drosophila, to earn money for tuition. She wrote her dissertation for her master's degree on how the pronephros in fish developed early in their life. She earned a master's degree in zoology in June 1932. She wanted to continue for a doctorate, but in 1934 Carson had to leave Johns Hopkins to find a full-time teaching job to help support her family. In 1935, her father died suddenly, and Carson had to take care of her aging mother. This made the money problem even bigger (this was during the Great Depression, when jobs were hard to find).

Working as a biologist

Her biology mentor from college helped her get a part-time job with the U.S. Bureau of Fisheries. Here she wrote for a educational broadcast called Romance Under the Waters on the radio (this was before television). It was a seven-minute program that ran once a week for a year. It was about aquatic life (mostly fish), to increase public interest in fish biology and in what the Bureau of Fisheries did. This was a job several people before Carson had not been able to do. Carson also began submitting articles on marine life in the Chesapeake Bay to local newspapers and magazines.

Carson's boss liked what she did, and asked her to write the introduction to a public brochure about the fisheries bureau. He also had her apply to the first full-time job that became available. When she took the civil service exam, she outscored all other applicants. In 1936 she became only the second woman to be hired by the Bureau of Fisheries for a full-time, professional position, as a junior aquatic biologist. Carson worked for 15 years in the U.S. Bureau of Fisheries and then the United States Fish and Wildlife Service.

Her 1951 bestselling book The Sea Around Us allowed her to work full-time as a nature writer. People recognized her as a gifted writer. Her next book, The Edge of the Sea, and the republished version of her first book, Under the Sea Wind, were also bestsellers. Together, the three books explore all parts of ocean life, from the shores to the surface to the deep sea.

In the late 1950s, Carson became interested in conservation and the environmental problems caused by new pesticides. At first, she did not want to write about it, but nobody else would write about the problems of pesticides. So she studied the problem, and wrote Silent Spring (published in 1962).

Rachel Carson died young, at the age of 56. She had breast cancer earlier. It was treated, but after several years cancer came back. She died April 14, 1964.

All content from Kiddle encyclopedia articles (including the article images and facts) can be freely used under Attribution-ShareAlike license, unless stated otherwise. Cite this article:
Rachel Carson Facts for Kids. Kiddle Encyclopedia.