Colesville is a census-designated place and an unincorporated area in Montgomery County, Maryland, United States. It had a population of 15,421 as of the 2020 census.

As an unincorporated area, Colesville's boundaries are not officially defined. In fact, many residents consider the town to be one of the many neighborhoods of Silver Spring, Maryland. Colesville is recognized by the United States Postal Service as an acceptable city name in two northeastern Montgomery County ZIP codes, with Silver Spring being the preferred city name. It is also recognized by the United States Census Bureau as a census-designated place, and by the United States Geological Survey as a populated place located at 39°4′47″N 77°0′12″W﻿ / ﻿39.07972°N 77.00333°W﻿ / 39.07972; -77.00333 (39.079695, -77.003263).

According to the United States Census Bureau, the place has a total area of 9.2 square miles (24 km2), all of it land.

Colesville's generally accepted boundaries extend between the Northwest and Paint Branches of the Anacostia River. Its northern and southern boundaries are not as well-defined, but are usually assumed to run from Springbrook High School in the south to Cloverly in the north.

The first land was purchased in Colesville from the Lords Baltimore in 1714, when Archibald Edmonston patented "Easy Purchase", a 900-acre (3.6 km2) tract that extended from Meadowood south to near present-day Route 29. In 1715, "Easy Purchase" was bought by James Beall, Sr., who that year also patented "Drumeldry", a 225-acre (0.91 km2) tract from the Northwest Branch across Notley Road to Shannon Drive. In 1718, his nephew William Beall patented "Wolf's Den", a 317-acre (1.28 km2) tract that straddled today's Bonifant Road and ran from Notley Road to Pebblestone Drive, and then southwest across the Northwest Branch.

However, none of these early landowners actually resided in Colesville. Robert Lazenby, thought to be the son of Henry Lazenby, High Sheriff of Anne Arundel County, purchased 217 acres (0.88 km2) of the southern part of "Wolfs Den" from William Beall in 1723, and became the first president farmer in Colesville.

In 1747, James Odell, grandson of James Beall Sr., was deeded 300 acres (1.2 km2) of a tract known as "Beal Christie" from his parents, and took to farming it. It was located east of today's New Hampshire Avenue near where it crosses Randolph Road.

In the 1790s, Peter Kemp built a saw and grist mill on Paint Branch where it is crossed by today's Randolph Road. The mill was rebuilt twice, and what is seen today in Valley Mill Park is the 1879 mill built by Franklin Pilling, which ceased to operate by 1930.

The earliest recorded use of the "Colesville" name was on January 25, 1806, when the General Assembly of Maryland changed the place of holding elections of the Fourth Election District of Montgomery County to "Edward Berry's, commonly called Coale's-Ville". 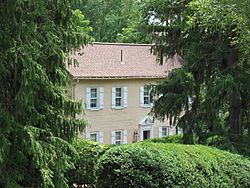 The oldest standing house in Colesville is "Milimar" at 410 Randolph Road, which is in the National Register of Historic Places and was built around 1790. It is also known as "The Old Lazanby Home", but was probably built by Samuel and Mary Peach, who purchased the 164.5-acre (0.666 km2) tract it is on known as "Peaches Lot" from Evan Thomas shortly after he freed his slaves.

The New York Times reported that President Franklin Pierce purchased a farm of 600 acres (2.4 km2) in Colesville in 1855.

Joseph F. Burr started purchasing Colesville-area land in 1869. By 1872, he had amassed nearly 1,000 acres (4.0 km2) and lived in a beautiful mansion on the property known as Valley View. The mansion was located on the north side of today's Randolph Road, on the site of today's Holy Family Seminary. Burr was a friend of President Grover Cleveland, who visited Valley View frequently.

In 1927, the Smithville Colored School was founded in Colesville. It was one of sixteen schools for African Americans constructed in the county with financial assistance from the Julius Rosenwald Fund. It was closed in 1952 when all Montgomery County schools for "colored" children were consolidated.

The Holy Family Seminary, headquarters of the American Delegation of the catholic order of the Sons of the Holy Family, is also located in Colesville, since 1946.

Colesville hosts the Strawberry Festival every May. The festival is located at the corner of Hobbes Drive and New Hampshire Avenue. Vendors sell strawberries and ice cream, and volunteers organize carnival games for kids. 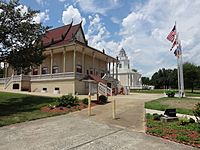 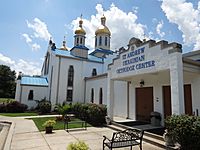 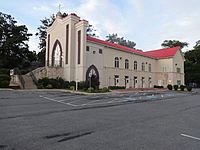 There were 6,525 households, out of which 37.1% had children under the age of 18 living with them, 73.1% were married couples living together, 9.0% had a female householder with no husband present, and 15.3% were non-families. 12.3% of all households were made up of individuals, and 5.7% had someone living alone who was 65 years of age or older. The average household size was 3.02 and the average family size was 3.28.

All content from Kiddle encyclopedia articles (including the article images and facts) can be freely used under Attribution-ShareAlike license, unless stated otherwise. Cite this article:
Colesville, Maryland Facts for Kids. Kiddle Encyclopedia.