Woods Hole is a census-designated place in the town of Falmouth in Barnstable County, Massachusetts, United States. It lies at the extreme southwest corner of Cape Cod, near Martha's Vineyard and the Elizabeth Islands. The population was 781 at the 2010 census.

It is the site of several famous marine science institutions, including Woods Hole Oceanographic Institution, the Marine Biological Laboratory, the Woods Hole Research Center, NOAA's Northeast Fisheries Science Center (which started the Woods Hole scientific community in 1871), the Woods Hole Science Aquarium, a USGS coastal and marine geology center, and the home campus of the Sea Education Association. It is also the site of United States Coast Guard Sector Southeastern New England (formerly USCG Group Woods Hole), the Nobska Light lighthouse, and the terminus of the Steamship Authority ferry route between Cape Cod and the island of Martha's Vineyard. 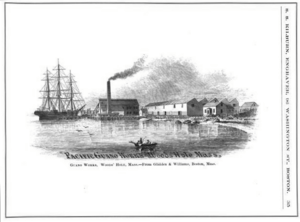 Historically, Woods Hole included one of the few good harbors (along with Hyannis) on the southern side of Cape Cod (i.e. Great Harbor, contained by Penzance Point). The community became a center for whaling, shipping, and fishing, prior to its dominance today by tourism and marine research. At the end of the nineteenth century, Woods Hole was the home of the Pacific Guano Company, which produced fertilizer from guano imported from islands in the Pacific Ocean, the Caribbean, and the coast of South Carolina. After the firm went bankrupt in 1889, Long Neck–the peninsula on which their factory was located–was renamed Penzance Point and was developed with Shingle-Style summer homes for bankers and lawyers from New York and Boston. Notable property owners on Penzance Point at the beginning of the twentieth century included Seward Prosser of New York's Bankers Trust Company; Francis Bartow, a partner in J. P. Morgan and Company; Joseph Lee, a partner in Lee, Higginson & Co.; and Franklin A. Park, an executive of Singer Sewing Machine. Other notable businessmen established homes on Gansett Point, Nobska Point, and at Quissett Harbor, further from the village center.

Woods Hole is located at the southwest tip of the town of Falmouth (and of Cape Cod) at 41°31′36″N 70°39′47″W﻿ / ﻿41.52667°N 70.66306°W﻿ / 41.52667; -70.66306 (41.526730, -70.663184). The term "Woods Hole" refers to a passage for ships between Vineyard Sound and Buzzards Bay known for its extremely strong current, approaching four knots. The strait separates Cape Cod from the Elizabeth Islands (specifically, Uncatena Island and Nonamesset Island). It is one of four straits allowing maritime passage between Buzzards Bay and the Vineyard Sound. The others are Canapitsit Channel, Quick's Hole and Robinson's Hole. Ferries operated by the Steamship Authority run regularly between Woods Hole and Martha's Vineyard. In the past ferries also ran between Woods Hole and Nantucket, but these have been discontinued in recent decades. 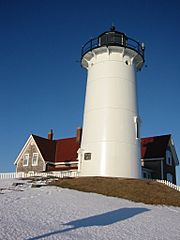 A view of downtown Woods Hole from the water, including MBL and WHOI buildings

Much of Woods Hole centers around the enclosed harbor of Eel Pond. A drawbridge at the mouth of the harbor allows boats to enter and exit the harbor according to a fixed schedule.

The local lighthouse at Nobska Point is operated by the United States Coast Guard, and the accompanying house is the home of the commander of the Coast Guard base at Little Harbor.

Local landmark The Knob is a rocky outcropping that overlooks Buzzards Bay and Quisset Harbor. It is a part of the privately owned Salt Pond bird sanctuaries.

The annual Falmouth Road Race brings thousands of runners to Woods Hole in August each year. The route of the 7-mile (11 km) race starts outside the front door of the Captain Kidd tavern and follows the shore of Vineyard Sound through Falmouth to the British Beer Company, another tavern, in Falmouth Heights.

There were 459 households out of which 14.8% had children under the age of 18 living with them, 39.7% were married couples living together, 5.4% had a female householder with no husband present, and 53.6% were non-families. 40.5% of all households were made up of individuals and 17.9% had someone living alone who was 65 years of age or older. The average household size was 1.94 and the average family size was 2.58.

All content from Kiddle encyclopedia articles (including the article images and facts) can be freely used under Attribution-ShareAlike license, unless stated otherwise. Cite this article:
Woods Hole, Massachusetts Facts for Kids. Kiddle Encyclopedia.