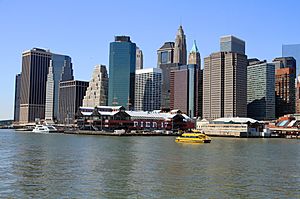 Downtown (called a city centre in British English) is a word used in North America which refers to the main part of a city. It is usually the central business district where most commercial and office areas are; many of them being in skyscrapers. Tourism also concentrates there.

All content from Kiddle encyclopedia articles (including the article images and facts) can be freely used under Attribution-ShareAlike license, unless stated otherwise. Cite this article:
Downtown Facts for Kids. Kiddle Encyclopedia.