Located in the borough of Ville-Marie, the district is situated on the southernmost slope of Mount Royal.

The downtown region houses many corporate headquarters as well a large majority of the city's skyscrapers — which, by law, cannot be greater in height than Mount Royal in order to preserve the aesthetic predominance and intimidation factor of the mountain. The two tallest of these are the 1000 de La Gauchetière and 1250 René-Lévesque, both of which were built in 1992. The Tour de la Bourse is also a significant high-rise and is home to the Montreal Exchange that trades in derivatives. The Montreal Exchange was originally a stock exchange and was the first in Canada. In 1999, all stock trades were transferred to Toronto in exchange for an exclusivity in the derivative trading market.

Place Ville-Marie, is a cruciform office tower designed by I.M. Pei. It was built in 1962, and sits atop an underground shopping mall that forms the nexus of Montreal's underground city, the world's largest. It has indoor access to over 1,600 shops, restaurants, offices, businesses, museums and universities, as well as metro stations, train stations, bus terminals, and tunnels extending all over downtown. The central axis for downtown is Saint Catherine Street, Canada's busiest commercial avenue. The area includes high end retail such as the Holt Renfrew Ogilvy department store as well as Les Cours Mont-Royal shopping centre. Other major streets include Sherbrooke Street, Peel, de la Montagne, de Maisonneuve and Crescent.

The skyline may be observed from one of two lookouts on Mount Royal. The lookout at the Belvedere takes in downtown, the river, and the Monteregian Hills. On clear days the Adirondack Mountains of Upstate New York are visible (the great-circle distance between Mount Royal and the U.S. border along a bee line normal to the border being only ~ 56 km, or ~ 35 miles), as are the Green Mountains of Vermont. The eastern lookout has a view of The Plateau neighbourhood, Olympic Stadium and beyond.

Downtown Montreal is also home to the main campuses of McGill University and UQAM and the Sir George Williams campus of Concordia University.

A number of museums can be found in or near Downtown Montreal, including the Canadian Centre for Architecture, McCord Museum, Montreal Museum of Contemporary Art, Montreal Museum of Fine Arts and Redpath Museum. Pointe-à-Callière Museum is more strictly in Old Montreal. 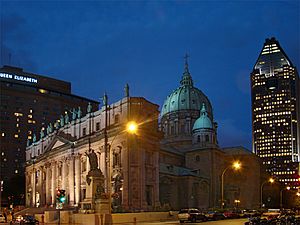 Mary, Queen of the World Cathedral is a Catholic minor basilica in Downtown Montreal.

The Bell Centre, used for ice hockey and other events, lies in the central/southern portion of Downtown Montreal. Place des Arts is located in the eastern part of the city's downtown, between Ste-Catherine and de Maisonneuve Streets, and St-Urbain and Jeanne-Mance streets, in an area now known as the Quartier des Spectacles, the complex is home to the Montreal Symphony Orchestra, Les Grands Ballets Canadiens, and the Opéra de Montréal. Percival Molson Memorial Stadium lies just to the North of Pine Avenue at the edge of Downtown Montreal. 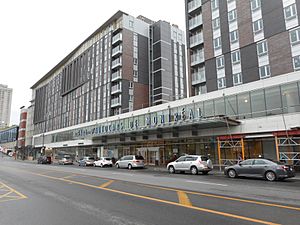 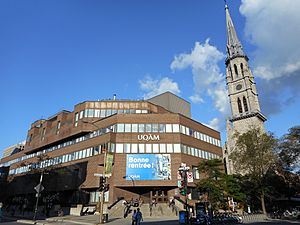 The Université du Québec à Montréal is one of several post-secondary institutions in Downtown Montreal.

Portions of four university-level establishments lie within Downtown Montreal: the main campus of McGill University, on the northern side of Sherbrooke Street; the Sir George Williams Campus of Concordia University in an area identified as Quartier Concordia in the western part of Downtown Montreal; École de technologie supérieure (a part of Université du Québec system) located near the southern edge of Downtown Montreal; and Université du Québec à Montréal, mainly in the Quartier Latin neighbourhood. Four colleges (pre-university) also lie in downtown: the public Cégep du Vieux Montréal on Ontario Street East; and the private colleges LaSalle College, O'Sullivan College and National Theatre School of Canada, including Monument-National, the venue used for its productions.

All content from Kiddle encyclopedia articles (including the article images and facts) can be freely used under Attribution-ShareAlike license, unless stated otherwise. Cite this article:
Downtown Montreal Facts for Kids. Kiddle Encyclopedia.