Kids Encyclopedia Facts
Not to be confused with Nathan Phillips Square.

Phillips Square (French: square Phillips) is a public square located in downtown Montreal, Quebec, Canada. It is named for Thomas Phillips, a building contractor and city councillor who bought the land from fur trader Joseph Frobisher. Phillips died in 1842 and the land the square sits on was donated by his widow to be used as a perpetual memorial to her husband. 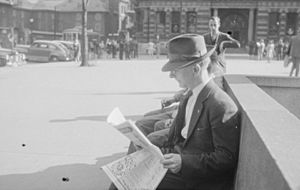 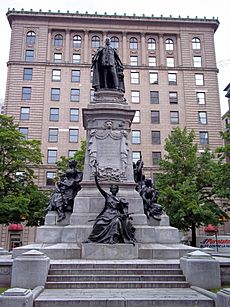 The monument to King Edward VII in Phillips Square.

In 1842, the square was first laid out, in what was at the time a wealthy residential area on the fringe of the city of Montreal. The first merchant to open a business on Phillips Square was Alfred Joyce, “the high class caterer and confectioner” and one-time mayor of the town of Outremont who built an elegant shop on the south side of the square in 1878. In 1891, Morgan's department store established itself on the north side of the square. That site is of particular interest to visitors from the U.S. because Confederate President Jefferson Davis sent his family to live in Montreal during the civil war; a brass plaque installed on the west side of the store, today called The Bay, was dedicated to the memory of Jefferson Davis, president of the Confederate States, who came in 1867 to stay in John Lovell’s house which then stood on the site. The plaque was removed in 2017.

The head office of Henry Birks and Sons was built soon after on the west side of the square in 1894. The fast food outlet on the corner of the east side of Phillips Square is where Montreal’s first art gallery was opened by Princess Louise and the Marquess of Lorne in 1879. When its collection grew, it eventually moved to the present-day Montreal Museum of Fine Arts. On the south side of the square, where Alfred Joyce once had his pastry shop, is the Canada Cement Building, built in 1921. Designed by Barott and Blackader, the dignified 10-storey building was the first office tower to be built completely of reinforced concrete. Canada Cement was founded by Max Aitken, later Lord Beaverbrook, and Barott convinced him to use concrete in the building of his head office to advertise his cement-based products. The building was considered avant garde when it opened because it was the first skyscraper in Montreal to have an underground parking garage, at a time when there were not so many automobiles on the road.

The square was most recently renovated in 1995. On August 31, 2012, a memorial to the victims of the Blue Bird Café fire, which occurred nearby in 1972, was unveiled by the city of Montreal on the south side of the square to mark the 40th anniversary of the tragedy.

The square features a bronze monument of King Edward VII, who ruled from 1901 to 1910. He visited Montreal in 1860, when he was still the Prince of Wales, to open the Victoria Bridge. The statue was designed by Louis-Philippe Hébert and was erected in 1914. The four allegorical figures at the base of the monument represent Peace, the Four Founding Nations, Abundance, and Liberty.

All content from Kiddle encyclopedia articles (including the article images and facts) can be freely used under Attribution-ShareAlike license, unless stated otherwise. Cite this article:
Phillips Square Facts for Kids. Kiddle Encyclopedia.