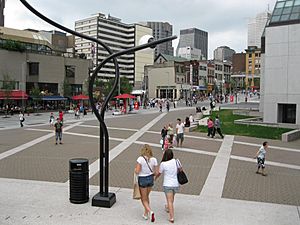 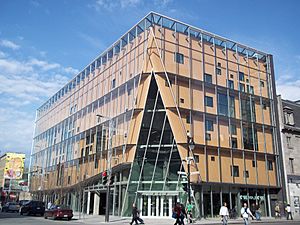 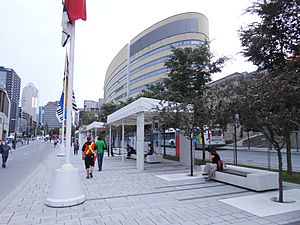 Quartier des Spectacles is an arts and entertainment district located in the eastern section of Downtown Montreal, designed as a centre for Montreal's cultural events and festivals. The Quartier des spectacles is a member of the Global Cultural Districts Network.

With a total area of almost one square kilometre, the Quartier is bounded by City Councillors Street to the West, Berri Street to the East, Sherbrooke Street to the North and René Lévesque Boulevard to the South, encompassing all of the district known as Montreal's Latin Quarter.

The area is now home to many of Montreal's major festivals, including the Montreal International Jazz Festival, the Francofolies and the Just for Laughs comedy fest. Urban design features of the district include concert spaces, tiered green space and stonework, illuminated fountains, various forms of street lighting, mist machines, bike paths and illuminated walkways.

The central public space for the Quartier is the Place des Festivals [fr], a new urban square located on the "Balmoral Block" on Jeanne-Mance Street, facing Place des Arts. The latter has become a focal point for outdoor events. Features of the square include a water fountain with 235 in-ground jets, four light towers, two glass-encased restaurants, a grassy slope and granite walkways.

Édifice 2-22 [fr] is a cultural centre specializing in contemporary art. Its ticket office at the corner of Saint Catherine Street and Saint Laurent Boulevard was designed by French architect Paul Andreu.

In the fall of 2017, the National Film Board of Canada is scheduled to move its headquarters to Montreal's Quartier des spectacles, in a new building being constructed by the city of Montreal, adjacent to the Place des festivals square. The NFB will occupy the first four floors of the structure, which will allow the NFB to interface more closely with the public and expand its digital media research and production facilities.

Pre-existing cultural facilities in the area demarcated by the Quartier des spectacles include:

The area lost a key arts venue with the demolition of the Montreal Spectrum. Sixty-seven mature crabapple trees were cut down in a small square, Place Albert-Duquesne.

In 2008, Mayor Gérald Tremblay stated that the project would come in as budgeted at $120-million and spur development in the immediate neighbourhood for a projected total of $1.9 billion in private investment.

In June 2012, it was reported by the Montreal Gazette that the cost of the district's public spaces alone would be $147 million, with $67 million from the city of Montreal and $40 million each from provincial and federal governments. In 2011, Montreal’s auditor-general criticized the city for hand-picking one non-profit corporation, Angus Development, to build the 2-22 building and redevelop Saint-Laurent Blvd., and for failing to open the process up to tender, losing money by selling city land at below market value. Inadequate foundations, damage and wrong choice of joint sealers in 2011 also led to hundreds of thousands of dollars in repaving costs.

The 100th anniversary of the birth of Norman McLaren was marked by a National Film Board of Canada project entitled “McLaren Wall-to-Wall,” in which projections of short films inspired by four McLaren animated works were projected onto landmarks in the Quartier, from McLaren’s birthday on April 11 to June 1, 2014.

All content from Kiddle encyclopedia articles (including the article images and facts) can be freely used under Attribution-ShareAlike license, unless stated otherwise. Cite this article:
Quartier des spectacles Facts for Kids. Kiddle Encyclopedia.