Percival Molson Memorial Stadium (also known in French as Stade Percival-Molson; commonly referred to as Molson Stadium in English or Stade Molson in French) is an outdoor football stadium located downtown on the slopes of Mount Royal in Montreal, Quebec, Canada. Named in honour of Percival Molson, it is owned by McGill University and was the home of the Montreal Alouettes of the Canadian Football League from 1954 to 1967 and has been since 1998. The stadium is also home to the McGill Redbirds and Martlets of the RSEQ, the Montreal Royal of the American Ultimate Disc League, and the Canadian Corporate Soccer League, the largest amateur corporate league in Canada. The Selwyn House Gryphons high-school football team also play their home games at the stadium. The stadium has a capacity of 23,420, the result of a renovation project begun in 2009 that increased capacity from 20,202 to over 25,000 before seats were removed in 2014 to reduce capacity to its current level. 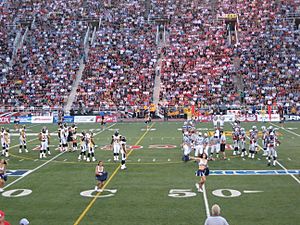 Montreal Alouettes cheerleaders entertain the crowd during a timeout in a game against the Hamilton Tiger-Cats on July 6, 2006, at Molson Stadium 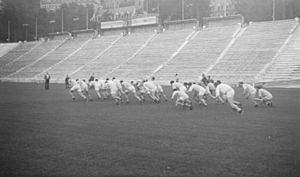 Construction was completed in 1914 on what was then known as McGill Graduates stadium, which was located on the slope of Mount Royal, at the corner of University and Pine (avenue Des Pins). The stadium sat dormant through World War I with the cessation of football from 1914 to 1918. On July 5, 1917, Captain Percival Molson (1880–1917), a McGill University alumnus and sports star who had been instrumental in getting the stadium plan approved, was killed in action in France (Molson was the great-grandson of brewer John Molson). His will left $75,000 to the university to help pay most of the total costs for the completion of the stadium. Other individual donors whose generosity built and renovated the stadium were William C. Macdonald and John W. McConnell. Designed by Percy Erskine Nobbs, the stadium was officially dedicated as McGill Graduates' Stadium at an intercollegiate track meet on October 22, 1915. It was renamed Percival Molson Memorial Stadium on October 25, 1919 by the university's Board of Governors, in honour of their fallen hero.

The Montreal Alouettes played at the stadium from 1954 to 1967 before moving to the Autostade. An attempted return to the Molson Stadium in 1972 was not successful and the team went back to the Autostade the following season. When a revived Alouettes franchise was forced to move a playoff game out of Olympic Stadium due to a U2 concert scheduled for the day of the game, they moved the game to Molson Stadium. The game was a sellout, prompting the Als to make Molson Stadium their primary home again the following season. However, all playoff games are played at Olympic Stadium, which until 2007 hosted at least one home game as well. Percival Molson Stadium is also home of the Selwyn House Gryphons and the McGill football and rugby teams. The only Grey Cup game to have been played at Molson Stadium was in 1931. Nevertheless, it was the first time the Grey Cup had been contested outside of Ontario. It also served as a venue for field hockey, during the 1976 Summer Olympics. It seated 20,202 and had been sold out for Alouettes games from August 12, 1999 until the 2009 renovation.

The Alouettes' decision to return to the venue was problematic because the team was being sponsored by the Labatt Brewing Company and the stadium shared the name of its major competitor, Molson, though not named for it. Eventually, the team chose to change sponsors and have been sponsored by Budweiser since 2014. In 2004, The Alouettes installed a FieldTurf surface at Molson Stadium replacing the old-style Astroturf.

Molson Stadium has been renovated and expanded, adding nearly 5,000 seats in time for the 2010 CFL season. The project to see the smallest CFL stadium increase to a seating capacity of 25,012 cost $29.4 million. Eleven rows were removed from the south side of the stadium to construct a second tier and add the majority of the new seats, about 3,800. Also, temporary bleachers in the east end-zone were replaced with 1,500 permanent seats, a new section was added to the northeast corner, and 19 new private suites were constructed. The cost of the renovations were shared by the Quebec government ($19.3 million), the city of Montreal ($4 million), and Robert Wetenhall, the Alouettes' owner ($6,023,935).

Because the playing surface is surrounded by a running track, the full 65-yard width and 20-yard length of the end zones is not available at the two end lines. However, the full width is available for more than half of each end zone, with the only missing pieces being the relatively small bits off the corners. Since the 2014 CFL season, it is the only stadium in the CFL to cut the corners on the end zones after Edmonton's Commonwealth Stadium squared off theirs.

All content from Kiddle encyclopedia articles (including the article images and facts) can be freely used under Attribution-ShareAlike license, unless stated otherwise. Cite this article:
Percival Molson Memorial Stadium Facts for Kids. Kiddle Encyclopedia.