Falmouth ( FAL-məth) is a town in Barnstable County, Massachusetts, United States. The population was 32,517 at the 2020 census, making Falmouth the second-largest municipality on Cape Cod after Barnstable. The terminal for the Steamship Authority ferries to Martha's Vineyard is located in the village of Woods Hole in Falmouth. Woods Hole also contains several scientific organizations such as the Woods Hole Oceanographic Institution (WHOI), the Marine Biological Laboratory (MBL), the Woodwell Climate Research Center, NOAA's Woods Hole Science Aquarium, and the scientific institutions' various museums.

For geographic and demographic information on specific parts of the town of Falmouth, please see the articles on East Falmouth, Falmouth Village, North Falmouth, Teaticket, West Falmouth, and Woods Hole. Falmouth also encompasses the villages of Hatchville and Waquoit, which are not census-designated places and fall within the village of East Falmouth based on postal service.

Falmouth was first settled by English colonists in 1660 and was officially incorporated in 1686. Bartholomew Gosnold named the settlement for Falmouth, Cornwall, England, his home port. Early principal activities were farming, salt works, shipping, whaling, and sheep husbandry, which was very popular due to the introduction of Merino sheep and the beginnings of water-powered mills that could process the wool. In 1837, Falmouth averaged about 50 sheep per square mile.

Falmouth saw brief action in the War of 1812, when the area around Falmouth Heights, on its southern coast, was bombarded by several British frigates and ships of the line, and Massachusetts militia hastily entrenched themselves on the beaches to repulse a possible British landing which never came. By 1872, the train had come to Falmouth and Woods Hole, and some of the first summer homes were established. By the late 19th century, cranberries were being cultivated and strawberries were being raised for the Boston market. Large-scale dairying was tried in the early 20th century in interior regions. After the improvement in highways, and thanks in part to the heavy use of neighboring Otis Air National Guard Base during World War II, population growth increased significantly. Large homebuilding booms occurred in the 1970s, followed by others in the 1980s and 1990s.

In the late 1800s, after railroad service was established between Boston and Cape Cod, James Madison Beebe bought over 700 acres (280 ha) and built Highfield Hall, which is now a museum, and much of the land is preserved as Beebe Woods.

The town of Falmouth has seven historic districts, including four on the National Register of Historic Places:

The other three historic districts are in Woods Hole, Davisville, and Quissett.

In addition to the historic districts, Falmouth has ten individual sites on the National Register:

Juniper Point, the eastern point of Woods Hole in Falmouth

According to the United States Census Bureau, the town has a total area of 54.4 square miles (141.0 km2), of which 44.1 square miles (114.1 km2) is land and 10.3 square miles (26.8 km2), or 19.04%, is water. Most of Falmouth, like the rest of Cape Cod, sits on glacial sands composed of glacial outwash deposits. However, the soil in the southwestern part of the town, consisting of moraine deposits, is more rocky and dense, like the rest of New England, and many glacial erratics are scattered about, having been dropped by the retreating glaciers. The climate is temperate marine. There is no exposed bedrock. Rainfall is evenly distributed throughout the year and averages 2 to 3 in (50 – 75 mm) per month.

Falmouth lies on the southwestern tip of Cape Cod. It is bordered by Bourne and Sandwich to the north, Mashpee to the east, Vineyard Sound to the south, and Buzzards Bay to the west. At its closest point, Falmouth is approximately 560 yards (510 m) from Nonamesset Island, the easternmost island of the town of Gosnold and the Elizabeth Islands. It is approximately 3 1⁄3 miles (5.4 km) north-northwest of Martha's Vineyard, the closest land to the island. Falmouth is approximately 14 miles (23 km) south of the Bourne Bridge, 22 miles (35 km) west of Barnstable, and 77 miles (124 km) south-southeast of Boston.

Falmouth's topography is similar to the rest of Cape Cod's, with many small ponds, creeks, and inlets surrounded by the pines and oaks of the Cape and often rocky beachfront. Falmouth's southern shore is notable for a series of ponds and rivers spaced very closely together, all of which travel some distance into the town. These include, from west to east, Falmouth Inner Harbor, Little Pond, Great Pond (which leads to the Dexter and Coonamesset rivers), Green Pond, Bourne's Pond, Eel Pond (which leads to the Childs River), and Waquoit Bay, which lies along the Mashpee town line. The Buzzards Bay side of the town is primarily bays divided by necks, peninsulas connected to land by isthmi. The largest inlet is Megansett Cove along the Bourne town line. The Buzzards Bay shore of Falmouth is punctuated by a number of hamlets, including, from north to south, Megansett, New Silver Beach, Old Silver, Chappaquoit, Sippewisset, Quissett, and Woods Hole. 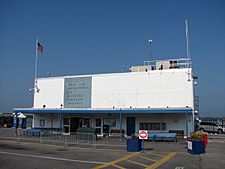 Falmouth's main road is Massachusetts Route 28, which runs south from Bourne as a divided highway, then becomes a surface road and heads east through downtown as Main Street, then turns northeast through East Falmouth before crossing into Mashpee. As one of two major east–west routes on the Cape, Route 28 is regularly congested, and there is minimal room for widening opportunities. Route 151 runs east–west through the northern section of the town, connecting North Falmouth and Hatchville with Mashpee.

The Massachusetts Coastal Railroad provides rail freight service to North Falmouth, where a spur runs into Otis Air Base to serve a trash transfer station. Also, as of a June 25, 2009 capecodonline.com article, the company plans to re-extend passenger railroad service to the town, complete with dinner and tourist trains, though this will also be only to North Falmouth, due to the fact that the other 8 miles (13 km) of railroad track had been replaced with the current Shining Sea Bikeway. On November 21, 2009, North Falmouth saw its first passenger train in at least 12 years. The nearest inter-city (Amtrak) passenger rail stations are Providence and Boston's South Station. The Middleborough/Lakeville and Kingston/Route 3 stations of the MBTA's commuter rail system provide the closest service to Boston.

There is a private air park in East Falmouth, and the nearest national and international air service is at Logan International Airport in Boston and T. F. Green Airport near Providence, both being about equidistant from Falmouth. There is a regional airport in nearby Hyannis. 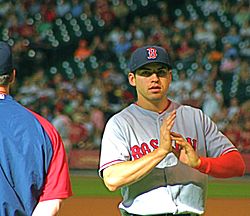 Falmouth is home to the Falmouth Commodores, an amateur collegiate summer baseball team in the Cape Cod Baseball League. The team plays at Arnie Allen Diamond at Guv Fuller Field, and has featured dozens of players who went on to careers in Major League Baseball, such as Tino Martinez, Darin Erstad, and Jacoby Ellsbury.

Falmouth is the home of its namesake Falmouth Road Race, an annual race started in 1973 that draws over 10,000 runners from all over the world. The race runs 7 miles (11 km) from the village of Woods Hole to Falmouth Heights Beach in downtown Falmouth.

Falmouth is home to a vibrant theatre community. The College Light Opera Company has performed at the Highfield Theatre every summer since 1969. Other institutions include the Falmouth Theatre Guild and the Cape Cod Theatre Project.

In addition to theatre, there is the Cape Cod Conservatory and the Falmouth Arts Guild.

Falmouth holds a yearly Christmas parade in the month of December that runs along Main Street in downtown Falmouth.

Camp Edwards, formerly named Camp Falmouth, is a US military training camp in western Barnstable County. It is the largest part of Joint Base Cape Cod, formerly named Massachusetts Military Reservation. The installation is of economic and environmental importance.

During the 1970s and 1980s, it was discovered that the groundwater in some areas of Falmouth had been contaminated by toxic chemicals linked to the disposal of jet fuel, solvents, industrial chemicals, and other substances on the Massachusetts Military Reservation, now known as Joint Base Cape Cod. Plumes of groundwater pollution that reached into Falmouth contaminated household well water in some neighborhoods and forced the town to shut down a public well in 1975 that accounted for 25% of the town's public water supply. A major report was released on the contamination in 1986. In 1996, the Air Force Center for Environmental Excellence (now known as the Air Force Center for Engineering and the Environment) assumed responsibility for the cleanup, treating soils at several sites and installing pumping wells in an effort to contain the plumes of groundwater contamination.

In 2010, the Silent Spring Institute tested about 20 public water supplies, 40 percent of which had detectable levels of perfluorinated compounds (PFCs). In 2015, the Air Force started testing private wells in the Currier Road area after water treatment plant samples showed elevated levels of 1,4-dioxane. Since May 2016, four houses in the Currier Road neighborhood have been receiving bottled water for elevated levels of PFCs after the U.S. Environmental Protection Agency established a national standard for PFCs, such as PFOS and PFOAs.

Falmouth's public school system serves about 4,500 students yearly. There are four schools, East Falmouth, Mullen-Hall, North Falmouth, and Teaticket, which serve the elementary school population, from pre-kindergarten to fourth grade. The Morse Pond Middle School serves grades five and six, while the Lawrence Junior High School serves grades seven and eight. Falmouth High School covers grades 9–12. (Prior to 1974 the 9–12 grades were in the Lawrence building and known as Lawrence High School.) FHS's athletics teams are nicknamed the Clippers, and their colors are maroon and white. They compete in the Atlantic Coast League, having moved recently from the Old Colony League. Their chief rival is nearby Barnstable High School. The public schools are supported in part by the Volunteers in Public Schools (VIPS), various PTO associations, the Falmouth Scholarship Association, the Falmouth Education Foundation (FEF), the Falmouth STEM Boosters and the Woods Hole Science Technology Partnership.

All content from Kiddle encyclopedia articles (including the article images and facts) can be freely used under Attribution-ShareAlike license, unless stated otherwise. Cite this article:
Falmouth, Massachusetts Facts for Kids. Kiddle Encyclopedia.