Kids Encyclopedia Facts
For other places with the same name, see Mashpee (disambiguation).

Mashpee is a town in Barnstable County, Massachusetts, United States, on Cape Cod. The population was 15,060 as of 2020. The town is the site of the headquarters and most members of the Mashpee Wampanoag Tribe, one of two federally recognized Wampanoag groups. 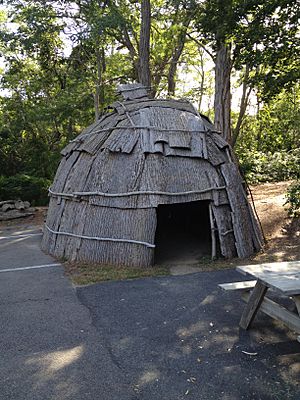 Avant House of the Wampanoag people of Mashpee, Massachusetts.

Cape Cod was occupied for more than ten thousand years by indigenous peoples. The historic Algonquian-speaking Wampanoag were the native people encountered by the English colonists here and in the area of the Massachusetts Bay Colony in the seventeenth century. The Wampanoag also controlled considerable coastal area. These two cultures would interact, shaping each other for decades.

After English colonists arrived, they began to settle the area of present-day Mashpee in 1658 with the assistance of the missionary Richard Bourne, from the neighboring town of Sandwich. In 1660 the colonists allowed those Christian Wampanoag who had been converted about 50 square miles (130 km2) in the English settlement. Beginning in 1665, the Wampanoag governed themselves with a court of law and trials according to English custom (they had long governed themselves according to their own customs). 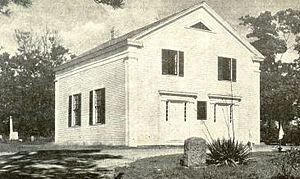 The "Old Indian Meeting House", built in 1684 at Mashpee, is the oldest Native American church in the United States.

Following their defeat in King Philip's War (1675–1676), the Wampanoag of the mainland were resettled with the Sakonnet in present-day Rhode Island. Others of the people were brought, together with the Nauset, into the praying towns, such as Mashpee, in Barnstable County. There were also Wampanoag on Martha's Vineyard and other areas.

The colonists designated Mashpee on Cape Cod as the largest Indian reservation in Massachusetts. The town's name is an Anglicization of a native name, mass-nippe: mass is "great", or "greater" (see Massachusetts), and nippe is "water". The name has been translated as "the greater cove" or "great pond," or "land near great cove", where the water being referenced is Wakeby Lake, which is greater at one end.

In the year 1763, the British Crown designated Mashpee as a plantation, against the will of the Wampanoag. Designation as a plantation meant that the area governed by the Mashpee Wampanoag was integrated into the colonial district of Mashpee. The colony gave the natives the "right" to elect their own officials to maintain order in their area, but otherwise subjected them to colonial government. The population of the plantation declined steadily due to the conditions placed upon the Wampanoag. They also suffered from encroachment on their lands by the English.

Following the American Revolutionary War, the town in 1788 revoked Mashpee self-government, which European-American officials considered a failure. They appointed a committee, consisting of five European-American members, to supervise the Mashpee. William Apess, a Pequot Methodist preacher, helped the Mashpee Wampanoag lead a peaceful protest of this action, and the governor threatened a military response.

In 1834, the state returned a certain level of self-government to the Wampanoag, although they were not completely autonomous. With the idea that emulating European-American farming would encourage assimilation, in 1842 the state broke up some of the Wampanoag communal land. It distributed 2,000 acres (8.1 km2) of their 13,000-acre (53 km2) property in allotments of 60-acre (240,000 m2) parcels to heads of households, so that each family could have individual ownership for subsistence farming.

The legislature passed laws against the encroachments on Wampanoag land by European Americans, but did not enforce them. The competing settlers also stole wood from the reservation. It was a large region, once rich in wood, fish and game, and desired by white settlers, who envied the growing community of Mashpee. The Mashpee Indians suffered more conflicts with their white neighbors than did other more isolated or less desirable Indian settlements in the state.

In 1870 the state approved the incorporation of Mashpee as a town, the second-to-last jurisdiction on the Cape to undergo the process. Ultimately the Wampanoag lost control of their land and self-government. Many of their descendants have remained in the area and identified as Mashpee by their communal culture.

In the early 1970s the Mashpee reorganized and filed a land claim against the state for the loss of lands. While they ultimately did not win their case, the Mashpee continued to develop as an organized community and gained federal recognition as a tribe in 2007.

Today the town of Mashpee is known both for tourist recreation and for its distinctive minority Wampanoag culture. The population is predominately European American in ancestry. As the town attracts numerous summer visitors, there are many seasonal businesses and service jobs to support this tourism.

That action was challenged in October 2016 by a United States District Court decision, reached after a suit was filed earlier that year by opponents to Mashpee Wampanoag plans to build a gaming casino on their Taunton land.

The Wampanoag hold an annual pow-wow at which they display traditional activities and crafts.

Mashpee is on the "upper," or western, portion of Cape Cod. It is bounded by Sandwich to the north and northwest, Barnstable to the east, Nantucket Sound to the south, and Falmouth to the west. It is approximately 65 miles (105 km) south-southeast of Boston and 70 miles (110 km) east-southeast of Providence, Rhode Island.

Like all towns on the Cape, Mashpee's topography is that of sandy soil, small ponds and inlets, surrounded by the pines and oaks indigenous to the area. The town's shoreline is framed by Waquoit Bay to the west and Popponesset Bay to the east, with several rivers, brooks and small ponds in the area. The town contains South Cape Beach State Park along Dead Neck and Waquoit Bay, and the Lowell Holly Reservation, comprising the land between Wakeby and Mashpee Ponds.

Mashpee also borders a small area of Otis Air National Guard Base, Joint Base Cape Cod, and Camp Edwards in the northwest portion of the town.

The Town of Mashpee is the only one on Cape Cod that never had a railroad constructed to it. According to 2.5. Rail Transportation, Joint Base Cape Cod has a railroad track extending into the town.

The nearest airports (Cape Cod Airfield, an airstrip for small planes, and Barnstable Municipal Airport, the largest airport on the Cape), can be found in the neighboring Town of Barnstable. The nearest national and international air service can be reached at Logan International Airport in Boston, or at T. F. Green Airport in Warwick, Rhode Island.

Historic and protected sites in Mashpee

Mashpee has two elementary schools, one middle school, and one high school located in the town. The middle school is located in the same building as the high school, operates under the same administration and has its own wing strictly for the 7th and 8th grade students. The building also houses the Technology "Center of Excellence". It has been recognized at several statewide conferences for its industry education and innovative course offerings.

Mashpee operates its own school system for the approximately 1,700 students in town. The Kenneth C. Coombs School (Also known as the K. C. Coombs School) is for pre-school to grade 2, the Quashnet School is for grades 3 to 6, and Mashpee Middle-High School is for grades 7-12. Before Mashpee High opened its doors in 1996, students residing in Mashpee attended nearby Falmouth High School.

Mashpee's athletics teams are named the Falcons, and their colors are royal blue, white, and black. They compete in the South Shore League in all sports except winter track, which competes in the Eastern Athletic Conference. Mashpee High School's main rivals are Monomoy Regional High School, Abington High School, Sandwich High School, and Cohasset High School. From 1999 to 2003 Mashpee played Sandwich High School in an annual Thanksgiving Football Game rivalry. From 2003–2009, Mashpee played Cape Cod Regional Technical High School. In 2009, Mashpee dropped the Thanksgiving rivalry with Cape Cod Tech and has since renewed the Thanksgiving rivalry with Sandwich, which is effective in the year 2010. Mashpee's football team is regarded as one of the premier small-school programs in the state. the Falcons have won 4 state championships (2011, 2015, 2016, 2017) under the leadership of head coach Matt Triveri.

A Wampanoag language Immersion school called Wôpanâôt8ây Pâhshaneekamuq is expected to open in Mashpee in 2016, serving preschool students in its first year and kindergarten students starting in 2017.

All content from Kiddle encyclopedia articles (including the article images and facts) can be freely used under Attribution-ShareAlike license, unless stated otherwise. Cite this article:
Mashpee, Massachusetts Facts for Kids. Kiddle Encyclopedia.