Barnstable County is a county located in the U.S. state of Massachusetts. As of the 2010 census, the population was 215,888. Its county seat is Barnstable. The county consists of Cape Cod and associated islands (some adjacent islands are in Dukes County and Nantucket County).

Barnstable County was formed as part of the Plymouth Colony on 2 June 1685, including the towns of Falmouth, Sandwich and others lying to the east and north on Cape Cod. Plymouth Colony was merged into the Province of Massachusetts Bay in 1691.

Cape Cod is described in a letter from the Italian explorer Giovanni da Verrazzano to Francis I of France, relating the details of a voyage to the New World made on behalf of the French crown in the ship Dauphine, the only surviving of a fleet of four. Sailing from Madeira in 1524, the Dauphine made land in North Carolina in March. It sailed north to Newfoundland, mapping the coast and interviewing the natives, whom he found friendly south of the cape, but unfriendly north of it. To the north of an island that reminded Verrazzano of Rhodes, the Dauphine made its way with difficulty over shoals "never less than three feet deep" extending "from the continent fifty leagues out to sea," which Brevoort, based on their extent, has identified as Nantucket Shoals. Verrazzano called them Armellini. On the other side was a promontory, Pallavisino, which is probably the cape, as they sailed along it for "fifty leagues." Details of the north end are not given, but subsequently they came to a "high country, full of very dense forests, composed of pines," which, according to Brevoort and others, resembles the coast of Maine.

After Verrazzano, what is now the eastern United States acquired the map label of New France, but France had no way to develop it. Scattered colonies in the wilderness of a few dozen men could not be supported until the foundation of Quebec in 1608. Meanwhile, the paper claim did not deter entrepreneurs. In March, 1602, Bartholomew Gosnold set sail from Falmouth, Cornwall, in the ship, Concord, transporting a crew of 8, an exploration party of 12, and 20 colonists, with the intent of establishing a trading post in the New World. Intersecting the coast of Maine, they turned to the south, encountered what appeared to be an island, and dropped anchor in Provincetown Harbor. Gosnold at first called the land Shoal Hope, but after discovering it was a cape, and acquiring a hold full of cod from the abundant schools in Cape Cod Bay, he changed the name to Cape Cod.

Gosnold explored the cape, establishing good relations with the natives there, approximately 1500 members of the Nauset Tribe, closely related in language and custom to the Wampanoag people of the mainland, and under their sovereignty. John Brereton, chaplain of the expedition, reported that they were dark-skinned, customarily nude except for deerskins over the shoulders and sealskins around the waist, and wore their long, black hair up in a knot. They painted their bodies. Some knew a few English words, which is something of a historical problem, as Gosnold and his companions are believed to have been the first English to land in America. Gosnold made a point of describing how healthy the people appeared.

Subsequently, Gosnold sailed around the cape to discover an island, "full of wood, vines, gooseberry bushes, whortleberries, raspberries, eglantines, etc.," as well as large numbers of shore birds. He named it Martha's Vineyard after his daughter. Another island nearby, Cuttyhunk Island, he named Elizabeth Island, in honor of Elizabeth I of England, from which the Elizabeth Islands take their name. He intended to place a trading post there, but when the time came for the return voyage, the colonists decided not to remain. Gosnold ventured a second time to the New World in 1608 as Captain John Smith's second in command of the Jamestown expedition. After three months there he died of malaria.

In 1603 another mercantile expedition set sail from Bristol, England, in two ships, the Speedwell and the Discoverer, commanded by a 23-year-old captain, Martin Pring. Elizabeth I had died two weeks earlier, but Pring had secured permission from Sir Walter Raleigh, who held from the queen exploration rights to all of North America.

Barnstable County is not co-extensive with Cape Cod. The latter is a geophysical term defined by its insular or peninsular landmass. According to Freeman, it is a "long, irregular peninsula" between 65 mi (105 km) and 75 mi (121 km), measured along the north or the south shores respectively, and between 5 mi (8.0 km) and 20 mi (32 km) wide. Originally, he points out, only the tip was considered the cape, but as it was settled the name extended from its tip to the shortest line across the isthmus. Barnstable County, on the other hand, is a geopolitical and legal term. It is the area contained within the borders of all cities and towns defined to be in the county by the Massachusetts General Court. These borders were located in multiple episodes of disputed legislation during the centuries since the foundation of Plymouth Colony.

The main difference between Cape Cod and Barnstable County is the band of water up to several miles wide extending from the shoreline to the outermost county border. The offshore area contains significant maritime life, as well as being a recreational and transportational medium, and containing historical material lost with sunken ships.

The highest elevation in the county is 306 feet (93 m) on the summit of Pine Hill, located on Joint Base Cape Cod in Bourne. The lowest point is sea level. 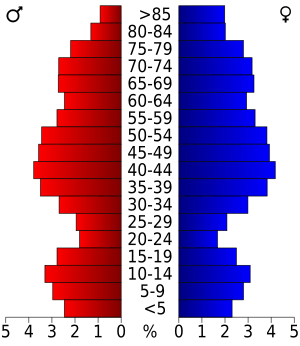 Age breakdown of residents in 2000 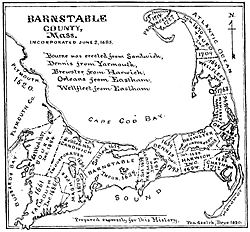 Cities and towns have been legally incorporated as such under the laws of the State of Massachusetts. They include the entire territory of the state. A city may continue to name itself a town even though legally a city. Villages are subordinate to cities or towns. In addition to and not necessarily based on these legal municipalities are the arbitrary divisions of the United States Census Bureau. Villages are census divisions, but have no separate corporate existence from the towns they are in. Other arbitrary divisions may be in use. For example, the City of Barnstable has five fire districts that cover the seven villages - each village has its own fire department except that Centerville, Osterville and Marstons Mills have combined their efforts into the COMM Fire Department.

All content from Kiddle encyclopedia articles (including the article images and facts) can be freely used under Attribution-ShareAlike license, unless stated otherwise. Cite this article:
Barnstable County, Massachusetts Facts for Kids. Kiddle Encyclopedia.