Kids Encyclopedia Facts
This page is about the wildlife refuge. For other uses, see Monomoy.

The island was taken over by the US government just before World War II and established as a National Wildlife Refuge in 1944. The island was also home to the Monomoy Island Gunnery Range from 1944 until 1951. The refuge's goal is to provide habitat for migratory birds. The size of the refuge is 7,604 acres (31 km²) with varied habitats of oceans, salt and freshwater marshes, dunes, freshwater ponds, and some historic manmade structures, such as the Monomoy Point Light and keeper's quarters (decommissioned but open to the public). Part of the refuge is the Monomoy Wilderness. 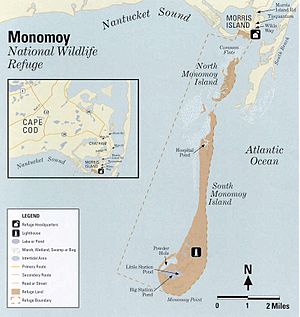 All content from Kiddle encyclopedia articles (including the article images and facts) can be freely used under Attribution-ShareAlike license, unless stated otherwise. Cite this article:
Monomoy National Wildlife Refuge Facts for Kids. Kiddle Encyclopedia.