Chatham is a town in Barnstable County, Massachusetts, United States. Chatham is located at the southeast tip of Cape Cod, and has historically been a fishing community. First settled by the English in 1664, the township was originally called Monomoit based on the indigenous population's term for the region. Chatham was incorporated as a town on June 11, 1712, and has become a summer resort area. The population was 6,594 at the 2020 census, and can swell to 25,000 during the summer months. There are four villages that comprise the town, those being Chatham (CDC), South Chatham, North Chatham, and West Chatham. Chatham is home to the Monomoy National Wildlife Refuge, and the decommissioned Monomoy Point Light both located on Monomoy Island. A popular attraction is the Chatham Light, which is an operational lighthouse that is operated by the United States Coast Guard.

Native American tribes who lived in the area before European colonization included the Nauset, specifically the Manomoy or Monomoy people. The expansive lands over which they roamed were known to them as Manamoyik or Monomoit. Explorer Samuel de Champlain landed here in October 1606 at a place he christened "Port Fortuné", where he contacted (and skirmished with) the Nauset. Twelve years later another group of Europeans gave it the name "Sutcliffe's Inlets". Neither name stuck, and the location was not permanently occupied by Europeans until English settlers reached Monomoit in 1664. The town was incorporated on 11 June 1712, at which point it was renamed after Chatham, Kent, England. Its territory expanded with the annexation of Strong Island and its vicinity on 7 February 1797.

Located at the "elbow" of Cape Cod, the community became a shipping, fishing, and whaling center. Chatham's early prosperity would leave it with a considerable number of 18th century buildings, whose charm helped it develop into a popular summer resort.

Chatham is home to the Chatham Lighthouse, which was established by President Thomas Jefferson in 1808 to protect the ships circling the Cape. The 1808 towers were replaced in 1841 by twin brick towers that were eventually lost to erosion. The pair were rebuilt in 1877 out of cast iron across the street from its original location, where the light is today. The northern of the two was moved to Eastham to become the Nauset Light in 1923, when the northern tower was declared surplus. Today, the keeper's house is home to a Coast Guard station which patrols the waters of the Atlantic and Nantucket Sound from Wellfleet to West Yarmouth. The first reforesting project in America took place on Great Hill in 1821 when Selectmen had pine trees and beach grass planted to prevent erosion and to keep sand from blowing over the village.

Although urban sprawl has invaded the Cape, the town of Chatham still boasts a quaint and walkable Main Street, home to numerous family-owned and -operated shops, restaurants, and businesses. The main shopping area features pedestrian-friendly crosswalks, on-street parallel parking, and some parking lots that are off Main Street. During the summer, concerts are held in a gazebo on Main Street, and not far from the shops is where the Chatham Anglers baseball team plays, as part of the Cape Cod Baseball League on the peninsula for collegiate-age players.

Chatham, like much of Cape Cod, is suffering from an exodus of young people and young families due to high housing prices and a lack of social and professional opportunities. The majority of homes in Chatham sit empty in the winter months until the summer when second-home owners come to use their summer/vacation homes, or they are used as weekly rentals for tourists. As of February 22, 2012, the average listing price for a home in Chatham was $1.3 million.

In summer, Chatham grows to a population of an estimated 30,000. Facilities are overcrowded, and there continues to be limited parking in the Main Street Business District. Beaches are affected by this increase of population. Limited parking exists in established parking areas, and the town's most popular beach, Lighthouse Beach, has only off the street parking, which sometimes involves a long walk to her sandy shores. 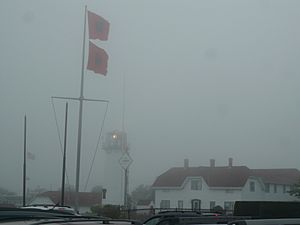 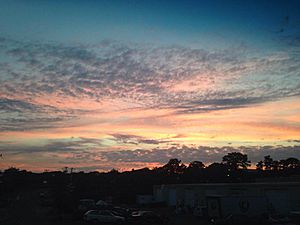 The town occupies the southeast corner (the "elbow") of Cape Cod. The town's villages include Chatham proper, Chatham Port, North Chatham, West Chatham, and South Chatham (west of West Chatham). Chatham is bordered by Harwich to the west, Pleasant Bay and Orleans to the north, the Atlantic Ocean to the east, and Nantucket Sound to the south. The town is 35 miles (56 km) south of Provincetown and east of the Sagamore Bridge, 20 miles (32 km) east of Barnstable, and 85 miles (137 km) southeast of Boston.

The mainland portion of the town is typical of Cape Cod, with several ponds, brooks, rivers, harbors, and inlets around the town. The town includes two narrow strips of land which serve as a barrier between the Atlantic and the mainland; the northern of these is the southern part of the Cape Cod National Seashore. There are several islands, including Strong Island, Tern Island (which is a sanctuary), Morris Island, Stage Island, and Monomoy Island, a 7.25-mile-long (11.67 km) island south of the corner of the town which is home to the Monomoy National Wildlife Refuge. Erosion has changed the region over the years—for example, an island named Slut's Bush once existed until it vanished under water by the mid 19th century.

Chatham has an Oceanic climate under the Köppen climate classification (Cfb) and is located in Hardiness zone 7b.

All five roads that exit Chatham cross into Harwich. The two state routes that pass through the town are Route 28 and the southern end of Route 137. Route 28 circles through the center of town before exiting and heading north toward Route 6A, joining that route until the roads end at the Orleans Rotary.

Rail service no longer extends to the town; the former rail bed is a bicycling path, and is called the Old Colony Rail Trail. In addition, another bicycle route passes through the town, starting at the end of the Rail Trail, and providing views of Chatham Fish Pier, Chatham Bars, and Chatham Light.

The town is the home to the Chatham Municipal Airport, which provides local service to other small airports on the Cape and islands. The nearest national and international air service can be reached at Logan International Airport in Boston. 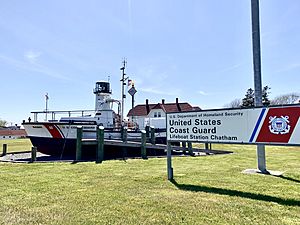 During the summer months (generally Memorial Day through Labor Day), the population of the town triples to approximately 20,000, not counting the additional transient tourist population hosted by the town's many hotels, inns, motels, and bed and breakfasts. Tourism and Hospitality along with Commercial Fishing make up the town's main industry. The town has a thriving commercial fish pier where day-boats unload fresh fish and lobster.

Until 2013, Chatham operated its own school system for the town's 700 students. The Chatham Elementary School served students from pre-kindergarten through fourth grade, the Chatham Middle School served students from fifth through eighth grade, and Chatham High School served grades nine through twelve. Chatham's athletics teams were known as the Blue Devils, and wore blue and white. In December 2010, Chatham and the neighboring town of Harwich voted to regionalize their school systems into the Monomoy Regional school system. The Monomoy teams are known as the Sharks and their colors are navy blue and sliver. In March 2013, construction began in Harwich on a new high school to serve the region, expected to open in 2014. High school students may attend Cape Cod Regional Technical School in Harwich free of charge. Other private schools are located in nearby Brewster and Harwich.

All content from Kiddle encyclopedia articles (including the article images and facts) can be freely used under Attribution-ShareAlike license, unless stated otherwise. Cite this article:
Chatham, Massachusetts Facts for Kids. Kiddle Encyclopedia.