Brewster is twinned with the town of Budleigh Salterton in the United Kingdom.

Brewster was first settled in 1656 as a northeastern parish of the town of Harwich. The town separated from Harwich as the northern, more wealthy parish in 1693, and was officially incorporated as its own town in 1803 when the less wealthy citizens of Harwich were upset that the town's institutions were all on Brewster's main street (now Route 6A), including the town hall and churches. Brewster was named in honor of Elder William Brewster, the first religious leader of the Pilgrims at Plymouth Colony. The town's history grew around Stony Brook, where the first water-powered grist and woolen mill in the country was founded in the late 17th century. There were many rich sea captains in the town, who built many of the mansions and stately homes which now constitute the town's inns and bed-and-breakfasts. Most notable of these are the Crosby Mansion on Crosby Lane by Crosby Beach, which is currently undergoing renovations to allow for more weddings and other functions, and the Captain Freeman Inn on Breakwater Road.

Brewster is bordered on the north by Cape Cod Bay, on the west by Dennis, on the south by Harwich, and on the east by Orleans. The town is usually separated into two villages, West and East Brewster, both of which comprise the Brewster census-designated place. Brewster is 31 miles (50 km) south of Provincetown, 14 miles (23 km) east of Barnstable, 31 miles (50 km) east of the Sagamore Bridge, and 85 miles (137 km) southeast of Boston.

The town is bordered by extensive tidal sand flats to the north, along the shores of Cape Cod Bay. The town is home to the Roland C. Nickerson State Forest Park, the largest state forest on Cape Cod. The town has several large ponds, especially along the Harwich town line. There are several brooks throughout the town, all of which lead to Cape Cod Bay. The bay is home to several boat landings and beaches in the town.

Brewster is home to the largest pond on Cape Cod, Long Pond. The Brewster-Harwich town line goes directly through the middle of the pond. Brewster's second largest pond is Cliff Pond, located in Nickerson State Park. Both are popular destinations.

U.S. Route 6 passes through the southeast corner of Brewster from southwest to northeast, as a two-lane expressway with no exits in the town, although exits 9 through 12 provide access to Brewster via other roads. The five other numbered highways in Brewster are all surface roads. Massachusetts Route 6A passes through the town from east to west as Main Street through the town center. Routes 124 and 137 both have a northern terminus along Route 6A in town; short portions of Routes 28 and 39 also pass through the southeastern corner of town (the portion of 28 is less than 100 yards long, and is actually signed as crossing from Harwich directly into Orleans). Brewster has one stop light (blinking red light, four way stop) at the intersection of Harwich Road (Route 124) and Long Pond Road (Route 137).

There were 4,124 households out of which 25.7% had children under the age of 18 living with them, 57.9% were married couples living together, 8.9% had a female householder with no husband present, and 30.8% were non-families. 24.8% of all households were made up of individuals and 12.6% had someone living alone who was 65 years of age or older. The average household size was 2.34 and the average family size was 2.79. 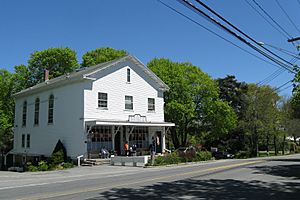 Brewster beaches, from east to west on the Cape Cod Bay are: Crosby Landing, Linnell Landing, Ellis Landing, Point of Rocks Landing, Breakwater Beach, Saint's Landing, Mant's Landing (Robbins Hill Beach), and Paines Creek Beach. In addition to the beaches on the northside, there are numerous important recreation areas in the town. The Drummer Boy Park on Route 6A has walking trails, picnic areas, playground, and an 18th-century windmill, the Old Higgins Farm Windmill, and blacksmith shop. Several hiking trails leave the Natural History museum, with the John Wing Trail going over a salt marsh boardwalk to Wing Island and the beach on Cape Cod Bay. At Nickerson State Park, there are 1900 acres of open woodland, nearly 8 miles of biking trails that can be hiked as well, and hiking trails around several ponds. Punkhorn Parklands also has thousands of acres of protected woodland with many hiking trails, the one to Eagle Point being particularly popular. Smaller conservation areas are available for hiking throughout the town. 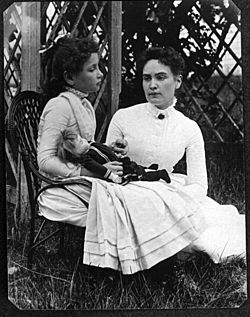 In July 1888, Helen Keller and her teacher, Anne Sullivan, visited Brewster. In the photo, Helen is shown cradling a doll. The photograph was recently discovered almost 120 years after it was taken. The mother of the woman who provided the photograph was Helen's playmate at the Elijah Cobb House.

Minnie Riperton's song, "Alone in Brewster Bay", refers to when Riperton and her husband, producer Dick Rudolph, vacationed on Cape Cod during the early 1970s, prior to the release of her 1975 hit single, "Lovin' You".

Samuel M. Nickerson, president of the First National Bank of Chicago, was one of the most influential business leaders of the time. Nickerson's shares in First National Bank were sold for $2.1M, according to The New York Times, 9/29/1899. The syndicate that purchased the shares included J. P. Morgan, E. H. Harriman and Marshall Field. The Nickerson summer house, Fieldstone Hall in Brewster, is now a condominium resort called Ocean Edge.

In a 2011 episode of Who Do You Think You Are?, Ashley Judd traced her direct lineage back to William Brewster, the town's namesake.

All content from Kiddle encyclopedia articles (including the article images and facts) can be freely used under Attribution-ShareAlike license, unless stated otherwise. Cite this article:
Brewster, Massachusetts Facts for Kids. Kiddle Encyclopedia.