Harwich ( HAR-wich) is a New England town on Cape Cod, in Barnstable County in the state of Massachusetts in the United States. At the 2010 census it had a population of 12,243. The town is a popular vacation spot, located near the Cape Cod National Seashore. Harwich's beaches are on the Nantucket Sound side of Cape Cod. Harwich has three active harbors. Saquatucket, Wychmere and Allen Harbors are all in Harwich Port. The town of Harwich includes the villages of Pleasant Lake, West Harwich, East Harwich, Harwich Port, Harwich Center, North Harwich and South Harwich.

Harwich was first settled by Europeans in 1670 as part of Yarmouth. The town was officially incorporated in 1694, and originally included the lands of the current town of Brewster. Early industry involved fishing and farming. The town is considered by some to be the birthplace of the cranberry industry, with the first commercial operation opened in 1846. There are still many bogs in the town, although the economy is now more centered on tourism and as a residential community. The town is also the site of the start/finish line of the "Sail Around the Cape", which rounds the Cape counter-clockwise, returning via the Cape Cod Canal.

Since 1976, the town has hosted the annual Harwich Cranberry Festival, noted for its fireworks display, in September.

In the summer, the town is host to the Harwich Mariners of the Cape Cod Baseball League. The Mariners were the 2008 league champions. The team plays at Whitehouse Field.

The Patriot Square Shopping Center in neighboring South Dennis is convenient for residents of North Harwich and West Harwich. The plaza contains a Stop & Shop supermarket and other stores around it. Supermarkets in Harwich include a Shaw's Star Market on the Harwich Port/West Harwich border and another Stop & Shop in East Harwich.

According to the United States Census Bureau, the town has a total area of 33.1 square miles (85.8 km2), of which 20.9 square miles (54.1 km2) is land and 12.2 square miles (31.7 km2), or 36.97%, is water. The seven villages of Harwich are West Harwich, North Harwich, East Harwich, South Harwich, Harwich Center, Harwich Port and Pleasant Lake. These are also referred to as the Harwiches.

Harwich is on the southern side of Cape Cod, just west of the southeastern corner. It is bordered by Dennis to the west, Brewster to the north, Orleans to the northeast, Chatham to the east, and Nantucket Sound to the south. Harwich is approximately 12 miles (19 km) east of Barnstable, 28 miles (45 km) east of the Cape Cod Canal, 35 miles (56 km) south of Provincetown, and 80 miles (130 km) southeast of Boston.

The town shares the largest lake on the Cape, called Long Pond, with the town of Brewster. Long Pond serves as a private airport for planes with the ability to land on water. The village of Pleasant Lake is at the southwest corner of the lake. Numerous other smaller bodies of water dot the town. Sand Pond, a public beach and swimming area, is located off Great Western Road in North Harwich.

The shore is home to several harbors and rivers, including the Herring River, Allens Harbor, Wychmere Harbor, Saquatucket Harbor, and the Andrews River. The town is also the home to the Hawksnest State Park, as well as a marina and several beaches, including two on Long Pond. There are also many beaches in West Harwich and South Harwich. 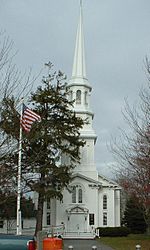 The First Congregational Church of Harwich, in Harwich Center

There were 5,471 households out of which 21.3% had children under the age of 18 living with them, 53.4% were married couples living together, 9.0% had a female householder with no husband present, and 35.2% were non-families. 29.8% of all households were made up of individuals and 16.9% had someone living alone who was 65 years of age or older. The average household size was 2.20 and the average family size was 2.72.

There are three libraries in the town. The municipal library, the Brooks Free Library in Harwich Center, is the largest and is a member of the Cape Libraries Automated Materials Sharing (CLAMS) library network. There are two smaller non-municipal libraries – the Chase Library on Route 28 in West Harwich at the Dennis town line, and the Harwich Port Library on Lower Bank Street in Harwich Port.

Harwich is the site of the Long Pond Medical Center, which serves the southeastern Cape region.

Harwich has police and fire departments, with one fire and police station headquarters, and Station 2 in East Harwich. 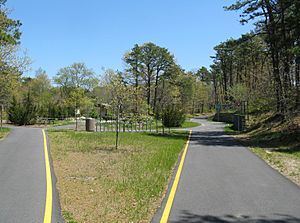 Two of Massachusetts major routes, U.S. Route 6 and Massachusetts Route 28, cross the town. The town has the southern termini of Routes 39 and 124, and a portion of Route 137 passes through the town. Route 39 leads east through East Harwich to Orleans. Route 28 passes through West Harwich and Harwich Port, connecting the towns of Dennis and Chatham. Route 124 leads from Harwich Center to Brewster, and Route 137 cuts through East Harwich leading from Chatham to Brewster.

In recent years parts of Cape Cod have introduced bus service, especially during the summer to help cut down on traffic.

All content from Kiddle encyclopedia articles (including the article images and facts) can be freely used under Attribution-ShareAlike license, unless stated otherwise. Cite this article:
Harwich, Massachusetts Facts for Kids. Kiddle Encyclopedia.