The Cape Cod Rail Trail (CCRT) is a 25.5-mile (41.0 km) paved rail trail located on Cape Cod in Massachusetts. The trail route passes through the towns of Yarmouth, Dennis, Harwich, Brewster, Orleans, Eastham, and Wellfleet. It connects to the 6-plus mile (10 km) Old Colony Rail Trail leading to Chatham, the 2 mile Yarmouth multi-use trail, and 8 miles (13 km) of trails within Nickerson State Park. Short side trips on roads lead to national seashore beaches including Coast Guard Beach at the end of the Nauset Bike Trail in Cape Cod National Seashore. The trail is part of the Claire Saltonstall Bikeway.

In July 2020, the state awarded $181,000 for design of Phase 3 of the extension project, which will extend the trail west from Peter Horner Park in Yarmouth to Mary Dunn Road in Barnstable. Because that section of the rail line is still in use, the trail will follow a different route to the south. 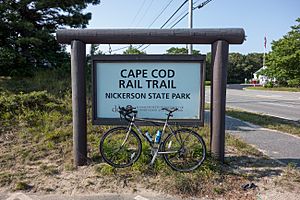 A road bike stands poised to ride at the start of the Cape Cod Rail Trail in Nickerson State Park, Cape Cod.

The trail begins in Yarmouth at Station Avenue. This trailhead has a parking area and is just south of exit 8 on US 6. West of here, the trail crosses over Station Ave on an overpass and connects to Peter Homer Park and continues as the town-owned Yarmouth multi-use trail, which runs for 2 miles to Higgins Crowell Road. The first 5 miles of trail run through industrial and residential areas of Yarmouth and Dennis, and include a new trail bridge over the Bass River. It roughly parallels Great Western Road during this section, crossing it twice.

The trail then enters Harwich as the landscape turns to houses and agricultural land before turning gradually north and intersecting with the Old Colony Rail Trail at a bike rotary between miles 3 and 4. The rotary has maps and benches in its center for users of the trail. North of the rotary, the trail passes through a wooded area and crosses Route 6 via an overpass. Another parking area is located at the trail's intersection with Headwaters Drive, north of Route 6. It crosses Massachusetts Route 124 at mile 5 and runs along it until mile 7, passing several ponds and entering Brewster at mile 6.

The CCRT crosses Massachusetts Route 137 at mile 8 and then runs south of central Brewster. A parking area is located at Route 137, before the trail enters Nickerson State Park just past mile 10. It is in the park for about two-thirds of a mile, intersecting some of its trails, then crosses Massachusetts Route 6A by an underpass as it leaves the park. A parking lot is located near the Route 6A crossing. 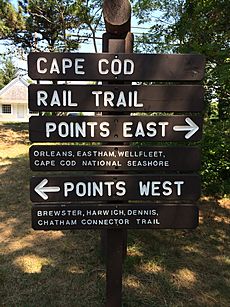 The trail continues to cross Namskaket Creek into Orleans between miles 11 and 12. The crossing of Route 6 between miles 12 and 13, near exit 12 on the highway, constitutes the trail's only (and brief) on-road section. The trail follows Salty Ridge Road to West Road, where it turns right over the Route 6 overpass. It then turns left and leaves West Road heading northeast into downtown Orleans. The CCRT crosses Main Street just past mile 13; this area in downtown has several bike shops and dining establishments. A parking area is located off of Old Colony Way, named for the former railroad that the trail runs on. The landscape changes to a less dense residential area as it leaves downtown. The third crossing of Route 6 is an overpass just before mile 14 and just east of the Orleans rotary.

The trail enters Eastham shortly after this, at which point there is a large salt marsh, Boat Meadow Creek, on the west side of the trail. It was at this location that a rudimentary canal, Jeremiah's Gutter, had existed in the 1700s, allowing passage from Cape Cod Bay to the Cove area of Orleans. Around mile marker 15, the trail enters the residential section of Eastham, crossing Gov. Prence Road. The trail remains relatively straight through most of Eastham, and at-grade road crossings are fairly frequent. Locust Road, between miles 16 and 17, is a signed bike route to the Nauset Bicycle Trail (which brings cyclists and pedestrians to Coast Guard Beach) and the Salt Pond Visitor Center, as well as other points in the Cape Cod National Seashore. In the North Eastham area, just west of the trail's intersection with Brackett Road, there are bike shops as well as delis and a Ben and Jerry's ice cream shop. North of Brackett Road, the trail runs closer to Route 6 and several motels and restaurants on the east side of the highway are connected directly to the trail.

The CCRT enters Wellfleet near mile 19. Sparse residential development lies west of the trail, while the east side of the trail is fronted by a power line right-of-way, with undeveloped National Seashore land beyond that. North of mile 21, the trail intersects Marconi Beach Road, which leads to Marconi Beach and the Marconi Station site. Sparse development continues, with the trail ending near mile 22, at Lecount Hollow Road in Wellfleet. This trailhead has the only parking area on the trail north of Orleans. The road provides access to several Wellfleet town beaches.

In April 2018, Massachusetts DCR awarded a contract for the design and construction of a 2-mile northern extension of the rail trail from the current terminus at LeCount Hollow Road to Route 6 near turnoff to Wellfleet Center. This extension will follow the former railroad grade. As part of this project, the state has purchased a former campground and renovated it. The new Wellfleet Hollow Campground opened in May 2019.

Efforts to extend the bike path from the Wellfleet trailhead north to Provincetown have been under discussion for many years. Four possible routes were identified in 2011: a scenic corridor through the National Seashore, a share-the-road corridor of back roads west of Route 6, a corridor that follows the former railroad right of way (some of which is now privately owned), and a route that would take the bike path north along a power line right of way from South Wellfleet into Truro and then along Route 6 into Provincetown.

All crossings in Barnstable County, Massachusetts.

All content from Kiddle encyclopedia articles (including the article images and facts) can be freely used under Attribution-ShareAlike license, unless stated otherwise. Cite this article:
Cape Cod Rail Trail Facts for Kids. Kiddle Encyclopedia.