Wellfleet is a town in Barnstable County, Massachusetts, United States, and is located halfway between the "tip" and "elbow" of Cape Cod. The town had a population of 2,750 at the 2010 census, which swells nearly sixfold during the summer. A total of 70% of the town's land area is in protection, and nearly half of it is part of the Cape Cod National Seashore. Wellfleet is famous for its eponymous oysters, which are celebrated in the annual October Wellfleet OysterFest.

Wellfleet was encountered by Europeans as early as 1606, when the French explorer Samuel de Champlain explored and named it "Port Aux Huitres" (Oyster Port) for the bountiful oyster population resident to the area. Originally settled in the 1650s by the Europeans as Billingsgate (after the famous fish market in East London), Wellfleet was part of neighboring Eastham until 1763, achieving town status after nearly 30 years of petitioning.

Wellfleet's oyster beds drove the early economy, as did whaling and other fishing endeavors. The town was home to 30 whaling ships at the time of the American Revolution. However, because of the decline of whaling and the mackerel catch in the late 19th century, the fleet declined, being completely free of schooners by 1900. The oyster fleet continues to this day, however, harvesting many other types of shellfish as well. 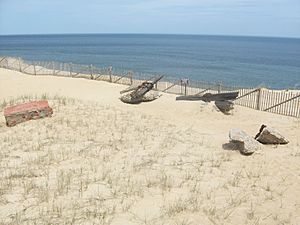 The remains of Marconi's station

Guglielmo Marconi built America's first transatlantic radio transmitter station on a coastal bluff in South Wellfleet in 1901–02. The first radio telegraph transmission from America to England was sent from this station on January 18, 1903, a ceremonial telegram from President Theodore Roosevelt to King Edward VII. Most of the transmitter site is gone, however, as three quarters of the land it originally encompassed has been eroded into the sea. The South Wellfleet station's first call sign was "CC" for Cape Cod.

In 1961, President John F. Kennedy created the Cape Cod National Seashore, which encompasses most of the Atlantic shoreline of Cape Cod. In Wellfleet the territory circles the town, from Jeremy Point through the marshes and "islands" along the Herring River, includes Cahoon Hollow Beach, and extends the length of the Atlantic shore of the town.

Construction of the Chequesset Inn in the late 19th century contributed to the development of a tourist economy in Wellfleet. The town has the second greatest concentration of art galleries on Cape Cod, right after Provincetown. It is also a popular retirement spot.

In 1717, the pirate "Black Sam" Bellamy was sailing near what is now Wellfleet when his ship, the Whydah, sank off shore, together with over 4.5 short tons (4.1 tonnes) of gold and silver and all but two of its 145 men. The wreck was discovered in 1984, the first of only two confirmed pirate shipwrecks ever to have been discovered.

The lands of Wellfleet wrap around Wellfleet Harbor, extending from the main portion of the Cape around the harbor to Jeremy Point. At one time, Wellfleet Harbor included an island known as Billingsgate Island, which sat at the harbor's mouth, to the south of the point. Once a flourishing small community with a lighthouse, the island was destroyed by coastal erosion and now exists as a shoal that is exposed at low tide. The Billingsgate shoals are split between Wellfleet and neighboring Eastham. Several other inlets extend inland from the harbor, at the mouth of the Herring River (also called "The Gut"), Duck Creek, Blackfish Creek and Fresh Brook (commonly known as "The Run") which leads to several brooks.

In addition to the Seashore, Wellfleet Bay Wildlife Sanctuary, run by Massachusetts Audubon, surrounds much of The Run, including part of Small Island (between The Run and Blackfish Creek). Between the sanctuary, seashore and other small parks and beaches, seventy percent of the town's area is protected.

U.S. Route 6 passes from north to south through the town. The town's commercial center lies west of the route, along the shores of the harbor. The route was straightened in the mid-20th century, and some maps still consider the "old" Route 6 to be a portion of Route 6A. The town has no rail or air service. The last train left the area in the 1930s, the train station was razed and the tracks were torn up through Provincetown. The nearest municipal airports are in Chatham and Provincetown, both about 18 miles (29 km) from town; the nearest national and international service can be found at Logan International Airport in Boston.

There is currently limited bus service between Wellfleet and Hyannis, and from there on to Boston and Logan Airport, on the Plymouth & Brockton Street Railway Company, a Plymouth-based bus service. The CCRTA, which runs between Hyannis and Provincetown, also makes stops in Wellfleet. 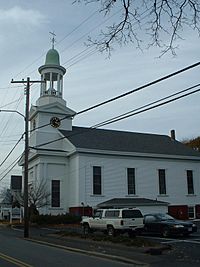 The First Congregational Church of Wellfleet. The clock tower (referred to as "Town Clock") is equipped with a ship's signal bell system.

There were 1,301 households out of which 20.0% had children under the age of 18 living with them, 44.8% were married couples living together, 8.2% had a female householder with no husband present, and 44.3% were non-families. 34.8% of all households were made up of individuals and 13.2% had someone living alone who was 65 years of age or older. The average household size was 2.11 and the average family size was 2.75.

All content from Kiddle encyclopedia articles (including the article images and facts) can be freely used under Attribution-ShareAlike license, unless stated otherwise. Cite this article:
Wellfleet, Massachusetts Facts for Kids. Kiddle Encyclopedia.