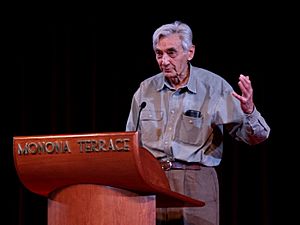 Howard Zinn (August 24, 1922 – January 27, 2010) was an American historian and professor. Zinn considered himself to be a radical. 1980, he wrote A People's History of the United States, which is a book that tells the history of the United States from the perspective of common people instead of people who were in power. This included people who were oppressed. As of the time of Zinn's death, the book had sold almost two million copies.

All content from Kiddle encyclopedia articles (including the article images and facts) can be freely used under Attribution-ShareAlike license, unless stated otherwise. Cite this article:
Howard Zinn Facts for Kids. Kiddle Encyclopedia.