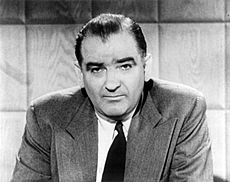 McCarthyism is the term describing a period of intense anti-Communist suspicion in the United States that lasted roughly from the late 1940s to the mid to late 1950s. The term gets its name from U.S. Senator Joseph McCarthy, a Republican of Wisconsin. The period of McCarthyism is also referred to as the Second Red Scare. It happened at the same times as increased fears of Communist influence on American institutions, espionage by Soviet agents such as the Rosenbergs, heightened tension from Soviet control over Eastern Europe, the success of the Chinese Communist revolution (1949) and the Korean War (1950-1953).

All content from Kiddle encyclopedia articles (including the article images and facts) can be freely used under Attribution-ShareAlike license, unless stated otherwise. Cite this article:
McCarthyism Facts for Kids. Kiddle Encyclopedia.