Truro is a town in Barnstable County, Massachusetts, United States, comprising two villages: Truro and North Truro. Located slightly more than 100 miles (160 km) by road from Boston, it is a summer vacation community just south of the northern tip of Cape Cod, in an area known as the "Outer Cape". English colonists named it after Truro in Cornwall, United Kingdom.

The historic Wampanoag Native American people called the area Pamet or Payomet. Their language was part of the large Algonquian family. This name was adopted for the Pamet River and the harbor area around the town center known as the Pamet Roads. The population of Truro was 2,003 at the 2010 census.

Over half of the land area of the town is part of the Cape Cod National Seashore, established in 1961 by President John F. Kennedy, and administered by the U.S. National Park Service. 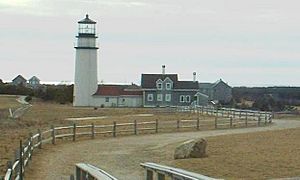 Highland Light. The original site is marked by a boulder in the foreground.

Cape Cod was the territory of succeeding cultures of indigenous peoples for thousands of years before Europeans arrived. At the time of English colonization, the Wampanoag tribe was the dominant one on Cape Cod, numbering about 7,000 by early accounts. They used the cape and its waters for hunting, fishing and gathering shellfish. They also cultivated maize to supplement their diets and to store for winter eating.

The English Pilgrims stopped in Truro and Provincetown in 1620 as their original choice for a landing before later deciding the area to be unsuitable. While there, they discovered fresh water and corn stored by the Wampanoag. Historians debate the accuracy of the account about the latter discovery, but in popular lore it led to the place being called Corn Hill.

Truro was settled by English immigrant colonists in the 1690s as the northernmost portion of the town of Eastham. The town was officially separated and incorporated in 1709. Fishing, whaling and shipbuilding made up the town's early industry. These industries had to shift to other locations as the harsh tides of the Lower Cape began decimating the town's main port in the 1850s. In the late 19th and early 20th century, Cape Cod was a popular location for artists because of its light.

Today, Truro is one of the more exclusive towns on the Cape, noted for its affluent residences and the rolling hills and dunes along the coast. Truro is the site of the Highland Light (also known as the Cape Cod Light), the first lighthouse on Cape Cod. The first building was erected in 1797; the current lighthouse was built in 1857. The entire 430-ton light was moved about 1⁄10 of a mile inland in 1996. By then, because of erosion, its original site was just ten yards from the edge of the shore cliffs.

The old town cemetery was the location of the murders in 1969 of Susan Perry, Patricia Walsh, Sydney Monzon and Mary Anna Wysocki by Tony Costa.

According to the United States Census Bureau, the town has a total area of 26.3 square miles (68 km2), of which, 21.0 square miles (54 km2) of it is land and 5.3 square miles (14 km2) of it (20.02%) is water. Truro is located just south and east of the "tip" of Cape Cod, and is bordered by Provincetown to the northwest, the Atlantic Ocean to the north and east, Wellfleet to the south, and Cape Cod Bay to the west. The town is thirty-eight miles by road to Barnstable, fifty miles from the Sagamore Bridge and 105 miles by road from Boston.

The topography generally slopes downward from the Atlantic to Cape Cod Bay, and from south to north. There are several small ponds throughout town, all of which combined are smaller than the Pilgrim Lake, just east of the Provincetown town line, and just south of the sand dunes which make up most of the northern tip of the Cape. Pamet Harbor, a small inlet, is in the southern half of the town on the Cape Cod Bay side, and leads to the Pamet River. Just south of the lighthouse is a Coast Guard radar station, equipped with a Doppler radar tower, close to the nearby Jenny Lind Tower.

There were 907 households out of which 21.2% had children under the age of 18 living with them, 46.3% were married couples living together, 7.9% had a female householder with no husband present, and 43.2% were non-families. 32.0% of all households were made up of individuals and 12.5% had someone living alone who was 65 years of age or older. The average household size was 2.18 and the average family size was 2.76. 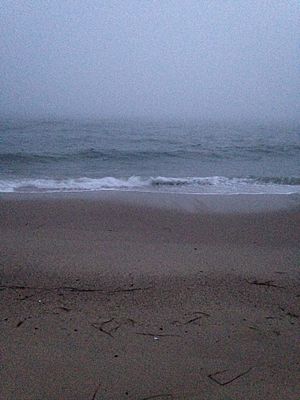 U.S. Route 6 is the main route through town, passing through the town from south to north on its way to Provincetown. The "second" portion of the Cape's Route 6A begins in the town, tracing the original path of Route 6, and passing into Provincetown barely 250 feet south of the main route. There is no rail or air service in the town; the nearest regional airport is located in neighboring Provincetown. The nearest national and international air service can be found at Logan International Airport in Boston.

Truro in popular culture and art

The first film in the Men In Black series displayed Truro on a satellite map, but the map zoomed in on Sandwich, a town at the opposite end of Cape Cod. In Men in Black II (2002) Truro was the town to which Tommy Lee Jones' character "Agent K" retired and became a postal worker. The post office was portrayed as a solitary building in the middle of nowhere. In contrast, Truro's post office is in the heart of "downtown" Truro, which is also the location of a small convenience store and a few shops.

Off Head of the Meadow beach on the Atlantic side of Truro lies the wreck of the three-masted barque Frances. The Hamburg-based ship wrecked off Truro on December 27, 1872, while on her way from the Far East to Boston. Usually submerged, the wreck will appear when weather and tides line up.

All content from Kiddle encyclopedia articles (including the article images and facts) can be freely used under Attribution-ShareAlike license, unless stated otherwise. Cite this article:
Truro, Massachusetts Facts for Kids. Kiddle Encyclopedia.