Barnstable ( BARN-stə-bəl) is a city, referred to as the Town of Barnstable, in the U.S. state of Massachusetts and the county seat of Barnstable County. Barnstable is the largest community, both in land area and population, on Cape Cod. At the 2010 census it had a population of 45,193. The town contains several villages (one of which is also named Barnstable) within its boundaries. Its largest village, Hyannis, is the central business district of the county and home to Barnstable Municipal Airport, the airline hub of Cape Cod and the islands of Martha's Vineyard and Nantucket. Additionally, Barnstable is a 2007 winner of the All-America City Award. 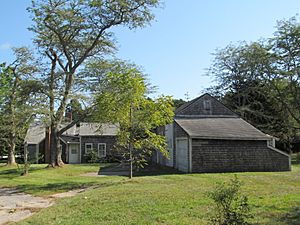 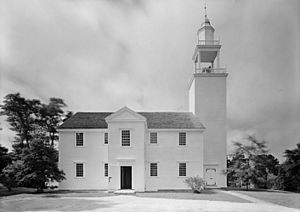 Barnstable takes its name from Barnstaple, Devon, England. The area was first explored by Bartholomew Gosnold in 1602. It was one of the first towns to be settled in Plymouth Colony, one year behind Sandwich, in 1638, and was incorporated in 1639. The early settlers were farmers, led by the Reverend Joseph Hull, the founder of Barnstable. A memorial tablet was dedicated there in 1939 (the 300th anniversary of the town's founding) marking the site of his home, and the rock from which he preached still stands along the highway there.

Soon after the town's founding, agriculture, fishing and salt works became its major industries. By the end of the 19th century, there were some 804 ships harbored in the town. But the role of sailing ships declined with the rise of ocean-going steamships and the railroad, which had arrived in 1854.

By the late 19th century, Barnstable was becoming world-renowned as the tourist destination it still is to this day. Many prominent Bostonians spent their summers on the Cape shores, as did presidents Ulysses S. Grant and Grover Cleveland. The most well-known family of the 20th century to summer in the town was, and remains, the Kennedy family. They still inhabit the Kennedy Compound in Hyannis Port. This was the summer home of President John F. Kennedy during his administration, and it was likewise the home of Senator Ted Kennedy until his death.

Today, tourists come in droves to the town during the summer months. Hyannis has numerous shops. Other attractions include the John F. Kennedy Museum and several other museums. Significant sites and renowned historic houses listed on the National Register of Historic Places include the Ancient Burying Ground and Gideon Hawley House, representing the town's colonial history. The town's many beaches are popular tourist destinations as well.

The Town of Barnstable contains several villages, which are not legally defined entities. Between seven and eleven are commonly enumerated, listed below with ZIP codes:

To the north of Barnstable lie the dunes of Sandy Neck along Barnstable Harbor, tipped by the Sandy Neck Light. The central part of the town is dominated by the pines and oaks around Wequaquet Lake. The south is where the bulk of the population lives, many along the beaches of Centerville and Hyannis Harbors.

Both U.S. Route 6 and Massachusetts Route 28 pass through the town from west to east, with Route 6 being a four-lane freeway through the town. Routes 6A, 132, 149 and a brief, 1/10 mile portion of 130 are also located in town. Route 6A follows an east-west route to the north of Route 6, on its route between the Sagamore Bridge and the Orleans Rotary. Routes 132 and 149 are both entirely located within the town, and both begin at 6A and end at Route 28.

Since 2013, the CapeFlyer passenger rail service has run on weekends between Memorial Day and Columbus Day. The Kingston/Route 3 and Middleborough/Lakeville stations of the MBTA's commuter rail system provide the closest, year-round, direct service to Boston. The nearest inter-city (Amtrak) passenger rail stations are Boston's South Station and Providence. Freight rail service is provided by the Massachusetts Coastal Railroad.

The Cape Cod Central Railroad operates seasonal tourist excursions from Hyannis to Sandwich and Sagamore, with some scheduled weekend stops at the West Barnstable depot on Route 149 near Route 6A.

The town is the site of two airports. Cape Cod Airfield is a smaller airfield, used primarily for private travel, and Barnstable Municipal Airport at Polando Field is used for regional flights, especially between the Cape and the islands. The nearest national and international air service can be reached at Logan International Airport in Boston. Hyannis is also the site of the main ferry lines to Nantucket and Martha's Vineyard.

All content from Kiddle encyclopedia articles (including the article images and facts) can be freely used under Attribution-ShareAlike license, unless stated otherwise. Cite this article:
Barnstable, Massachusetts Facts for Kids. Kiddle Encyclopedia.