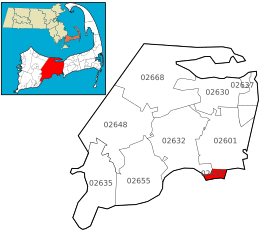 Location of ZIP code 02647 (Hyannis Port) within the Town and County of Barnstable, and the Commonwealth of Massachusetts 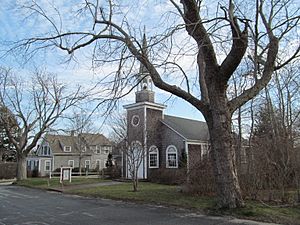 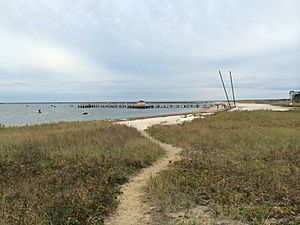 Hyannis Port (or Hyannisport) is a small residential village located in Barnstable, Massachusetts, United States. It is an affluent summer community on Hyannis Harbor, 1.4 miles to the south-southwest of Hyannis.

It has a small post office (zip code 02647) next door to a small seasonal convenience store, The News Shop and Gallery. It has one of the premier golf courses on Cape Cod, the Hyannisport Club, conduct Sunday services in the summer.

Hyannis Port is the location of the Kennedy compound and other Kennedy family residences and as such is included in the National Register of Historic Places. There are three Kennedy houses on the compound: Rose's, Jack's, and Ethel's. (Ted's house was nearby but not in the compound itself.) Rose Fitzgerald Kennedy was living in Hyannis Port and was the oldest resident in the town of Barnstable when she died at age 104.

According to the 2000 U.S. Census on April 1, it had 193 housing units with a resident population of 115 persons living in 46 housing units. There were 147 vacant housing units (76%), 144 of which were for seasonal, recreational, or occasional use. Based on the average family size of 2.97 persons, the summer population is at least 573.

All content from Kiddle encyclopedia articles (including the article images and facts) can be freely used under Attribution-ShareAlike license, unless stated otherwise. Cite this article:
Hyannis Port, Massachusetts Facts for Kids. Kiddle Encyclopedia.