Hyannis is the largest of the seven villages in the town of Barnstable, Massachusetts, in the United States. It is the commercial and transportation hub of Cape Cod and was designated an urban area at the 1990 census. Because of this, many refer to Hyannis as the "Capital of the Cape". It contains a majority of the Barnstable Town offices and two important shopping districts: the historic downtown Main Street and the Route 132 Commercial District, including Cape Cod Mall and Independence Park, headquarters of Cape Cod Potato Chips. Cape Cod Hospital in Hyannis is the largest on Cape Cod.

Hyannis is a major tourist destination and the primary ferry boat and general aviation link for passengers and freight to Nantucket Island. Hyannis also provides secondary passenger access to the island of Martha's Vineyard, with the primary passenger access to Martha's Vineyard being located in Woods Hole, a village in the nearby town of Falmouth. Due to its large natural harbor, Hyannis is the largest recreational boating and second largest commercial fishing port on Cape Cod, behind only Provincetown.

The village is the namesake of the former United States Naval ship USS Hyannis (YTB-817).

The village was named after Iyannough, a sachem of the Cummaquid tribe.

The climate of Hyannis can be described as either a humid continental or an oceanic climate (Dfb or Cfb under Köppen).

In 2007, the town water was found to contain perchlorate. In 2009, Barnstable public works requested that the fire academy cease their operations. In 2010, Well MD2 had been shut down "until contamination issues caused by the Fire Training Academy [were] addressed".

In April 2015, the town's Mary Dunn wellfield near a fire training academy was found to be contaminated with perfluorooctane sulfonate, and well use was suspended until costly emergency filtration with two carbon treatment units could be started. Two wells, at Hyannisport and West Hyannisport, were closed.

A six-month overland interconnection with Yarmouth's water system was suggested in May and constructed in June 2015. In November 2015, the county suspended the Barnstable County Fire and Rescue Training Academy which is up gradient of the wells. but in February 2016, it still remained open.

In May 2016, the Town of Barnstable issued a drinking water health advisory, for PFOS and perfluorooctanoic acid (PFOA) of 0.18 parts per billion in the Mary Dunn #3 well, which was taken offline.

In 2010, Hyannis had a total population of 14,089, living in 8,406 households. 19.80% of Hyannis' total 10,922 housing units were seasonally vacant. Hyannis had relatively more multi-family properties in comparison to the town and the county. Hyannis had an owner-occupancy rate of 58.3%, which was nearly 20 percentage points lower than the town or the county. This difference is associated primarily with the number of apartment properties in the village. A decline in younger, family formation households was attributed to the lack of suitable employment opportunities and "affordable" housing. The median value of owner-occupied housing units in Hyannis in 2000 was $149,720. The gross median rent in Hyannis was $718/month. In 2002, the median price for a single family home in Hyannis was $196,000.

Median head of household income was $38,467. 15.9% of households earned more than $75,000. 14.6% of Hyannis population lived below the poverty line. 18.74% were over 65 years old. Unemployment in Hyannis was 3.8% of the labor force. Hyannis is growing at the upper end and the lower end of the age cohorts, and although there has been an increase in persons 25 to 44 years of age, this has not necessarily been reflected in income change, as Hyannis witnessed an increase in the number of households earning $10,000 to $15,000 and an increase in the number of persons and families below the poverty level. 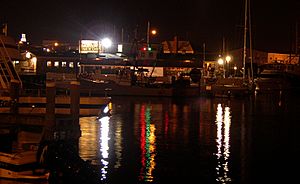 Hyannis is the main point of origin for ferry service to Nantucket. The Steamship Authority runs a year-round two and a half hour auto ferry service to Nantucket. The island can also be reached by a passenger-only, one-hour catamaran trip run by the Steamship Authority (seasonal) and Hy-Line Cruises (year-round). Hy-Line also runs a catamaran to Martha's Vineyard in season. One of the world's first Roll-On and Roll-Off ferries, the Searoad of Hyannis operated in 1956 from Hyannis to Nantucket, with the capability to transport three loaded semi-trailers in any weather.

The Hyannis Transportation Center (HTC) is the main bus and rail terminal on Cape Cod. The HTC services is a terminal station for Cape Cod Regional Transit Authority, the operator of the Cape-wide public bus network on Cape Cod, intercity buses operated by the Plymouth & Brockton and Peter Pan bus lines, and the seasonal CapeFlyer passenger rail service which operates between Boston and Hyannis Friday-Sunday in-season.

The Cape Cod Central Railroad operates seasonal tourist excursions from Hyannis to Sandwich and Sagamore, with some scheduled weekend stops at West Barnstable.

Freight rail service is provided by the Massachusetts Coastal Railroad.

Hyannis is mentioned in the song "Rock and Roll Band" by Boston: "Dancin' in the streets of Hyannis, we were getting pretty good at the game..."

Hyannis Port is the setting for the short story "Welcome to the Monkey House" by Kurt Vonnegut, Jr.

Hyannis is home to Barnstable High School, the largest high school on Cape Cod. The school serves students in grades 8-12 and has an approximate enrollment of 2,400. Other high schools include Sturgis Charter Public School, a charter school featuring the International Baccalaureate program, and Pope John Paul II High School, the first and only college preparatory Catholic high school on Cape Cod. It is a part of the Roman Catholic Diocese of Fall River. Trinity Christian Academy, which recently opened a high school, is also located in Hyannis. Saint Francis Xavier Preparatory School is a prep middle school. Cape Cod Community College, in nearby West Barnstable, is a two-year community college, known locally as "4-C's". 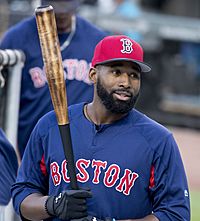 Jackie Bradley Jr. played for the Hyannis Harbor Hawks in 2011.

Hyannis is home to the Hyannis Harbor Hawks, an amateur collegiate summer baseball team in the Cape Cod Baseball League. The team plays at McKeon Park, and has featured dozens of players who went on to careers in Major League Baseball, such as Robin Ventura, Jackie Bradley, Jr., and Jason Varitek.

All content from Kiddle encyclopedia articles (including the article images and facts) can be freely used under Attribution-ShareAlike license, unless stated otherwise. Cite this article:
Hyannis, Massachusetts Facts for Kids. Kiddle Encyclopedia.