Sandwich is a town in Barnstable County, Massachusetts, United States. The population was 20,675 at the 2010 census. The Town Hall is located right next to the Dexter Grist Mill, in the historic district of town.

The town motto is Post tot Naufracia Portus (Latin for "after so many shipwrecks, a haven"). For more geographic and demographic information on specific parts of the town of Sandwich, please see the articles on East Sandwich, Forestdale, and Sandwich (CDP). The postal ZIP codes for the town are 02537, 02644, and 02563, respectively. It is the oldest town on Cape Cod. In 2014, Sandwich turned 375 years old.

Cape Cod was occupied for thousands of years by indigenous peoples, including the historic Algonquian-speaking Wampanoag, who encountered the English colonists of the Massachusetts Bay and Plymouth Colonies. Sandwich was first settled by Europeans in 1637 by a group from Saugus with the permission of the Plymouth Colony. It is named for the seaport of Sandwich, Kent, England. It was incorporated in 1639 and is the oldest town on Cape Cod. The western portion of the town was separated from the original "Town of Sandwich", and it became the town of Bourne in 1884. 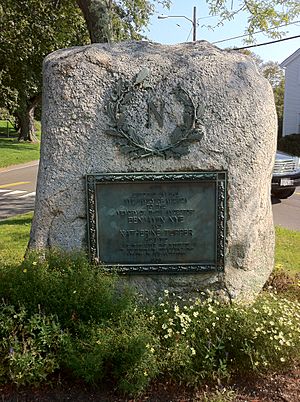 There are many historic homes in Sandwich, including the Benjamin Nye Homestead on Old County Road (formerly known as the original "Old King's Highway"), and the Benjamin Holway House built in 1789 at 379 Route 6A, which property hosts one of the original Nye Homestead structures, built in 1698 and believed to have originally served as either a tavern or a shop. It is now used as a law office. 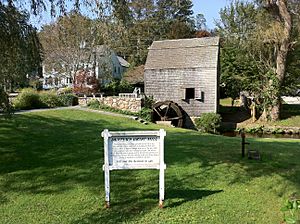 Sandwich was the site of an early Quaker settlement and today hosts the oldest continuous Quaker Meeting in the US. There were some conflicts with other religious groups, and so some Quakers left the town, either for further settlements along the Cape or elsewhere, including places such as Dartmouth. Many of Sandwich's prominent families have Quaker ties.

Early industry revolved around agriculture, with fishing and trading also providing for the town. Later, the town grew a small industrial component along the Scusset River and Old Harbor Creek and its tributaries. Today, most of its industry revolves around tourism. 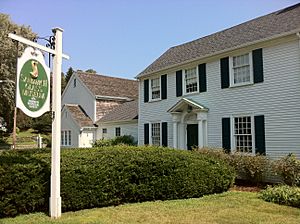 Deming Jarves founded the Boston & Sandwich Glass Factory in 1825. Sandwich had proximity to a shallow harbor, was a possible canal site, and had local supplies of timber to fuel the glass furnaces. The glass works primarily made lead-based glass, and was known for its use of color. Jarves received several patents for his improvements in glass mold designs and pressing techniques. The factory declined after the Civil War due to competition from Ohio, Pennsylvania, and West Virginia companies that produced less expensive pressed soda-lime glass tableware.

The Cape Cod Canal was constructed through the town starting in 1909, opening for travel in 1914. The Canal Generating Plant went online in 1968. 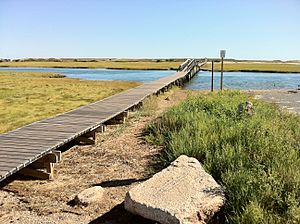 There are several attractions in Sandwich, including Heritage Museums and Gardens, the Wing Fort House, the Sandwich Glass Museum, the Thornton Burgess Museum and Green Briar Nature Center and Jam Kitchen, Hoxie House (the oldest house on Cape Cod), the Dan'l Webster Inn, the Dexter Grist Mill (the oldest on Cape Cod), the Sandwich Friends (Quaker) Meetinghouse (the oldest in North America), and Shawme Lake. The Sandwich town boardwalk is also popular for tourists. The walkway was destroyed by Hurricane Bob in 1991, but was rebuilt via private donations. Sandwich is home to numerous art galleries, rare book, and antique stores. It is also home to a major portion of Otis Air National Guard Base, including half the land that the runways are on. 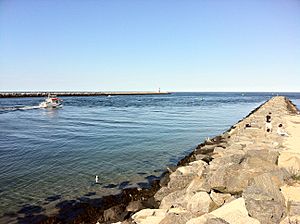 Sandwich is the site of the Cape Cod Bay entrance to the Cape Cod Canal. The northern point of Sandwich, where Sagamore Hill and Scusset Beach State Reservation lie, is divided from the rest of the town by the canal. The town is also the location of the Shawme-Crowell State Forest and the Massachusetts State Game Farm. The town is home to six beaches along the shores of Cape Cod Bay. The rest of the town's geography is typical of the rest of the Cape, with many small ponds and hills, with most of the trees being pine or oak. Sandwich is also the site of Old Harbor Creek, a large inlet with several other small creeks feeding it, which once served to provide safe harbor for ships.

U.S. Route 6, also known as the Mid-Cape Highway on Cape Cod, passes through the town to the north of Otis Air National Guard Base as a four-lane divided freeway. There are three exits off this route within town. Massachusetts Route 6A passes through town to the north of Route 6, and is the town's main local road. The northern terminus of Massachusetts Route 130 is near the intersection of Routes 6 and 6A within town. The road passes along the eastern side of Otis on its way towards Mashpee. 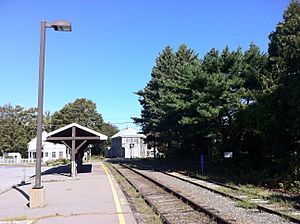 Freight rail service is provided by the Massachusetts Coastal Railroad. The Cape Cod Central Railroad operates seasonal tourist excursions from Hyannis to Sandwich and Sagamore. The nearest inter-city (Amtrak) passenger rail stations are Boston's South Station and Providence. Close by are the Kingston/Route 3 and Middleborough/Lakeville stations of the MBTA's commuter rail system, providing direct service to Boston. There is also seasonal passenger rail available in nearby Hyannis, the CapeFlyer, with service to Boston's South Station along the Middleborough/Lakeville line.

The nearest private and regional air service can be found in Barnstable, and the nearest national and international airport is Logan International Airport in Boston.

There were 7,335 households out of which 38.1% had children under the age of 18 living with them, 65.0% were married couples living together, 8.1% had a female householder with no husband present, and 24.8% were non-families. 20.0% of all households were made up of individuals and 8.9% had someone living alone who was 65 years of age or older. The average household size was 2.72 and the average family size was 3.18.

All content from Kiddle encyclopedia articles (including the article images and facts) can be freely used under Attribution-ShareAlike license, unless stated otherwise. Cite this article:
Sandwich, Massachusetts Facts for Kids. Kiddle Encyclopedia.