The Cape Cod Canal is an artificial waterway in the U.S. state of Massachusetts connecting Cape Cod Bay in the north to Buzzards Bay in the south, and is part of the Atlantic Intracoastal Waterway. The approximately seven-mile-long (11 km) canal traverses the narrow neck of land joining Cape Cod to the state's mainland. Most of its length follows tidal rivers widened to 480 feet (150 m) and deepened to 32 feet (9.8 m) at mean low water, shaving 135 miles (217 km) off the journey around the Cape for its approximately 14,000 annual users.

Most of the canal is located in Bourne, Massachusetts, but its northeastern terminus is in Sandwich, Massachusetts. Scusset Beach State Reservation lies near the canal's north entrance, the Massachusetts Maritime Academy near its south. A swift running current changes direction every six hours and can reach 5.2 miles per hour (8.4 km/h) during the receding ebb tide. The waterway is maintained by the United States Army Corps of Engineers and has no toll fees. It is spanned by the Cape Cod Canal Railroad Bridge, the Bourne Bridge, and the Sagamore Bridge. Traffic lights at either end govern the approach of vessels over 65 feet (20 m).

The canal is occasionally used by whales and dolphins, including endangered North Atlantic right whales; these can cause closure of the canal. 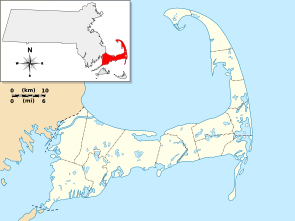 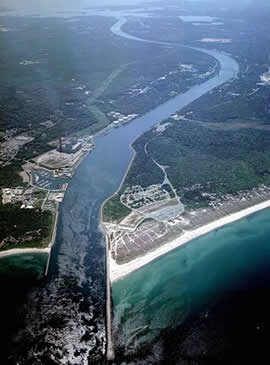 Aerial photo of the East End of the Cape Cod Canal and Scusset Beach State Reservation in southeastern Massachusetts, USA

Construction of a canal was first considered by Myles Standish of the Plymouth Colony in 1623, and the Pilgrims scouted the low-lying stretch of land between the Manomet and Scusset rivers for potential routes. William Bradford established the Aptucxet Trading Post in 1627 at the portage between the rivers. Trade prospered with the American Indians of Narragansett Bay and the Dutch of New Netherland, and this was a major factor enabling the Pilgrims to pay off their indebtedness. In 1697, the General Court of Massachusetts considered the first formal proposal to build the canal but took no action. In 1717, a canal was created in Orleans, Massachusetts called Jeremiah's Gutter which spanned a narrower portion of the Cape some distance to the east, but it only remained active until the late 1800s. More energetic planning with surveys took place repeatedly in 1776 (by George Washington), 1791, 1803, 1818, 1824–1830, and 1860. None of these efforts came to fruition.

The first attempts at actually building a canal did not take place until the late 19th century; earlier planners either ran out of money or were overwhelmed by the project's size. The engineers finally decided which route to take through the hillsides by connecting and widening the Manomet and Scusset Rivers. 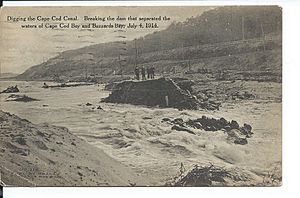 A postcard view of the July 4, 1914 breaking of the dam that separated the two rivers

On June 22, 1909, construction finally began for a working canal under the direction of August Belmont Jr.'s Boston, Cape Cod & New York Canal Company using designs by engineer William Barclay Parsons. There were many problems that the canal engineers encountered, such as huge boulders underwater. Divers were hired to blow them up, but the effort slowed dredging. Another problem was cold winter storms which forced the engineers to stop dredging altogether and wait for spring. Nevertheless, the canal opened on a limited basis on July 29, 1914, and it was completed in 1916. The privately owned toll canal had a maximum width of 100 feet (30 m) and a maximum depth of 25 feet (7.6 m), and it took a somewhat difficult route from Phinney Harbor at the head of Buzzards Bay. Several accidents occurred due to the narrow channel and navigation difficulty, and these limited traffic and tarnished the canal's reputation. Toll revenues failed to meet investors' expectations as a result, despite shortening the trade route from New York City to Boston by 62 miles (100 km).

The German U-boat U-156 surfaced three miles (4.8 km) off Orleans, Massachusetts on July 21, 1918 and shelled the tugboat Perth Amboy and her string of four barges. The Director General of the United States Railroad Administration took over jurisdiction and operation of the canal four days later under a presidential proclamation. The United States Army Corps of Engineers re-dredged the channel to 25 feet (7.6 m) deep while it remained under government control until 1920. In 1928, the government purchased the canal for $11.4 million as a free public waterway, and $21 million was spent between 1935 and 1940 increasing the canal's width to 480 feet (150 m) and its depth to 32 feet (9.8 m). As a result, it became the widest sea-level canal of its time. The southern entrance to the canal was rebuilt for direct access from Buzzards Bay rather than through Phinney Harbor. Before construction began, the Massachusetts Institute of Technology built a huge scale model of the canal (9 feet to a mile, roughly 1⁄587 actual size) to study the hydraulic effects of tidal currents on the enlarged and rerouted canal.

The Mystic Steamship Company's collier USS Stephen R. Jones (ID-4526) was grounded and sank in the canal on June 28, 1942. Shipping was routed around Cape Cod, and one diverted ship was the Liberty ship SS Alexander Macomb which was torpedoed by the Kriegsmarine's U-215 on July 3 with the loss of 10 lives. The canal reopened on July 31 after the wrecked Stephen R. Jones was removed with the help of 17 tons of dynamite.

The canal is used extensively by recreational and commercial vessels. Service roads on both sides of the canal provide access for fishing and are heavily used by in-line skaters, bicyclists, and walkers. Several parking areas are maintained at access points. Bourne Scenic Park is leased by the Corps of Engineers to the Town of Bourne Recreation Authority for use as a tent and RV campground adjacent to the Canal.

The Army Corps of Engineers maintains the Cape Cod Canal Visitor Center which introduces visitors to the history, features, and operation of the canal. Features include a retired 41-foot (12 m) US Army Corps of Engineers patrol boat, a 46-seat theater showing continuous DVD presentations on canal history, canal flora and fauna, real time radar and camera images of the waterway, and a variety of interactive exhibits. Corps Park Rangers staff the center and provide free public programs on a variety of subjects. The Visitor Center is open seasonally from May to October, and admission is free. It is located on Moffitt Drive in Sandwich near the canal's east end. A second seasonally staffed center is at the Herring Run along Scenic Highway.

Scusset Beach State Reservation lies just north of the east end of the canal and offers beach facilities as well as tent and RV camping. A 0.7-mile (1.1 km) trail there leads to Sagamore Hill, once an Indian meeting ground and the site of a World War II coastal fortification. Bournedale Hills Trail extends 1.4 miles (2.3 km) along the north side of the Canal from Bourne Scenic Park campground to the Herring Run. The trail includes a 0.8-mile (1.3 km) self-guided loop which interprets the Canal's historic and natural features.

A spoof became popular during the late 20th century concerning a fictitious tunnel, allegedly built in the 1960s under the Cape Cod Canal. It came into popular usage in Massachusetts as a commentary on the severe traffic entering and exiting Cape Cod during the summer months. Since 1994, decals have been sold in shops around the Cape as popular souvenirs purporting to be "permits" allowing the bearer to use the tunnel; the popularity of these "permits" briefly led to a lawsuit among several different sellers.

All content from Kiddle encyclopedia articles (including the article images and facts) can be freely used under Attribution-ShareAlike license, unless stated otherwise. Cite this article:
Cape Cod Canal Facts for Kids. Kiddle Encyclopedia.