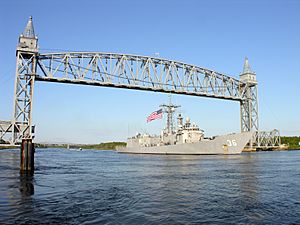 The U.S. Navy frigate USS Underwood passing under the bridge

The bridge was constructed beginning in 1933 by the Public Works Administration from a design by firms Parsons, Klapp, Brinckerhoff, and Douglas as well as Mead and White (both of New York), for the United States Army Corps of Engineers, which operates both the bridge and the canal. The bridge has a 544-foot (166 m) main span, with a 135-foot (41 m) clearance when raised, uses 1,100-short-ton (1,000 t) counterweights on each end, and opened on December 29, 1935. The bridge replaced a bascule bridge that had been built in 1910.

At the time of its completion, it was the longest vertical lift span in the world. It is now the second longest lift bridge in the United States, the longest being the Arthur Kill Vertical Lift Bridge between New Jersey and Staten Island, New York.

Maintenance and current use

The bridge is owned, operated and maintained by the US Army Corps of Engineers. In 2002, the Cape Cod Canal Railroad Bridge underwent a major rehabilitation, including replacement of cables, machinery, and electrical systems, at a cost of $30 million and was reopened in 2003.

The rail line over the bridge is owned by MassDOT, and is used year-round by the Massachusetts Coastal Railroad for their refuse train and other freight operations. The bridge is also used by seasonal tourist trains operated by the Cape Cod Central Railroad, as well as the MBTA's seasonal CapeFLYER, which runs between Boston and Hyannis.

All content from Kiddle encyclopedia articles (including the article images and facts) can be freely used under Attribution-ShareAlike license, unless stated otherwise. Cite this article:
Cape Cod Canal Railroad Bridge Facts for Kids. Kiddle Encyclopedia.