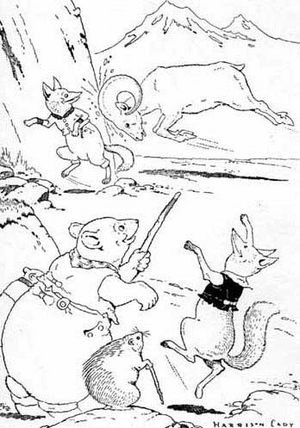 Thornton Waldo Burgess (January 17, 1874 – June 5, 1965) was an American conservationist and author of children's stories. Burgess loved the beauty of nature and its living creatures so much that he wrote about them for 50 years in books and his newspaper column, Bedtime Stories. He was sometimes known as the Bedtime Story-Man. By the time he retired, he had written more than 170 books and 15,000 stories for the daily newspaper column.

Born January 17, 1874 in Sandwich, Massachusetts, Burgess was the son of Caroline F. Haywood and Thornton W. Burgess, Sr., a direct descendant of Thomas Burgess, one of the first Sandwich settlers in 1637. Thornton, Sr., died the same year his son was born, and the young Thornton, Jr. was brought up by his mother in Sandwich. They lived in humble circumstances. As a youth, he worked tending cows, picking trailing arbutus (mayflowers) or berries, shipping water lilies from local ponds, selling candy, and trapping muskrats. William C. Chipman, one of his employers, lived on Discovery Hill Road, a wildlife habitat of woodland and wetland. This habitat became the setting of many stories in which Burgess refers to Smiling Pool and the Old Briar Patch.

Graduating from Sandwich High School in 1891, Burgess briefly attended a business college in Boston from 1892 to 1893, living in Somerville, Massachusetts, at that time. But he disliked studying business and wanted to be an author. He relocated to Springfield, Massachusetts, where he accepted a job as an editorial assistant at the Phelps Publishing Company. His first stories were written using the pseudonym W. B. Thornton.

Burgess married Nina Osborne in 1905, but she died in childbirth a year later, leaving him to raise their son alone. It is said that he began writing bedtime stories to entertain his young son, Thornton III. Burgess remarried in 1911; his wife Fannie had two children by a previous marriage. The couple later bought a home in Hampden, Massachusetts in 1925, that became Burgess' permanent residence in 1957. His second wife died in August 1950. Burgess returned frequently to Sandwich, which he always claimed as his birthplace and spiritual home. Many of his childhood experiences and the people he knew there influenced his interest and were the impetus for his concern for wildlife.

For the next 50 years, Burgess steadily wrote books that were published around the world in many languages, including French, Gaelic, German, Italian, Spanish, and Swedish. Collaborating with him was his illustrator and friend Harrison Cady who was born and raised in Gardner, Massachusetts and thereafter of New York and Rockport, Massachusetts. Peter Rabbit was created by British author and illustrator Beatrix Potter, prompting Burgess to note, "I like to think that Miss Potter gave Peter a name known the world over, while I with Mr. Cady's help perhaps made him a character."

From 1912 to 1960, without interruption, Burgess wrote his syndicated daily newspaper column (via the George Matthew Adams Service), Bedtime Stories.

From 1912 to 1960, Burgess also broadcast on the radio. His Radio Nature League radio series began at WBZ (AM), then located in Springfield, in early January 1925. Burgess broadcast the program from the studio at the Hotel Kimball on Wednesday evening at 7:30 p.m. Praised by educators and parents, the program had listeners and members in more than 30 states at its peak. Burgess' Radio Nature League disbanded briefly in August 1930, but he continued to give radio talks for WBZ concerning conservation and the humane treatment of animals.

In 1960, Burgess published his last book, Now I Remember, Autobiography of an Amateur Naturalist, depicting memories of his early life in Sandwich as well as his career highlights. That same year, Burgess, at the age of 86, had published his 15,000th newspaper column.

In 1998, Burgess' granddaughter, Frances B. Meigs, published My Grandfather, Thornton W. Burgess : An Intimate Portrait, detailing her childhood growing up under his wing.

Burgess was actively involved with conservation efforts. Some of his projects during his lifetime included:

For his efforts, Burgess also received:

After his death, the Massachusetts Audubon Society purchased Burgess' Hampden home and established the Laughing Brook Wildlife Sanctuary at that location; the house is listed on the National Register of Historic Places.

All content from Kiddle encyclopedia articles (including the article images and facts) can be freely used under Attribution-ShareAlike license, unless stated otherwise. Cite this article:
Thornton Burgess Facts for Kids. Kiddle Encyclopedia.