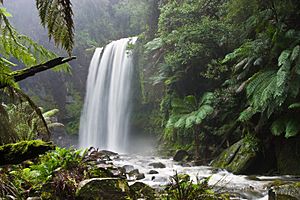 Much attention has been given to preserving the natural characteristics of Hopetoun Falls, Australia, while allowing ample access for visitors.

The conservation movement, also known as nature conservation, is a political, environmental and a social movement that seeks to protect natural resources including animal and plant species as well as their habitat for the future.

All content from Kiddle encyclopedia articles (including the article images and facts) can be freely used under Attribution-ShareAlike license, unless stated otherwise. Cite this article:
Conservation movement Facts for Kids. Kiddle Encyclopedia.