The Museum of Science (MoS) is a science museum and indoor zoo in Boston, Massachusetts, located in Science Park, a plot of land spanning the Charles River. Along with over 700 interactive exhibits, the museum features a number of live presentations throughout the building every day, along with shows at the Charles Hayden Planetarium and the Mugar Omni Theater, the only domed IMAX screen in New England. The museum is also an accredited member of the Association of Zoos and Aquariums (AZA) and is home to over 100 animals, many of which have been rescued and rehabilitated. 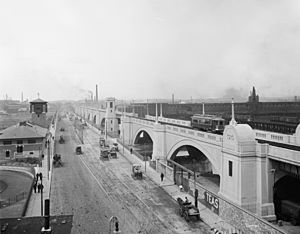 Lechmere Viaduct in the 1910s. The museum is later constructed behind the Metropolitan Police Station on the left 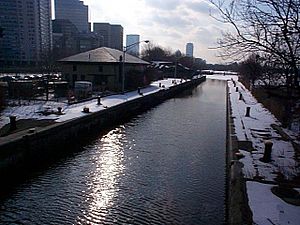 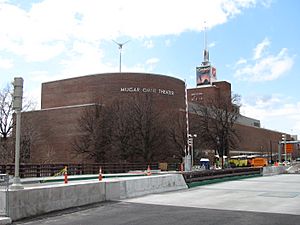 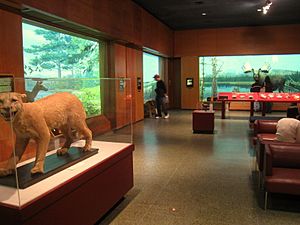 The museum began as the Boston Society of Natural History in 1830, founded by a collection of men who wished to share scientific interests. Their first meeting was held on February 9, 1830 with seven original members in attendance: Walter Channing, Benjamin D. Greene, George Hayward, John Ware, Edward Brooks, Amos Binney, and George B. Emerson. It was more commonly called the Boston Museum of Natural History in the 19th century, and this name occurs frequently in the literature. In 1862, after the society had gone through several temporary facilities, a building was constructed in the Back Bay area of the city and dubbed the "New England Museum of Natural History." The museum was located next to the original Rogers Building of the Massachusetts Institute of Technology (MIT), and both neoclassical structures were designed by William G. Preston. The original MIT building was demolished in 1939, but the Natural History Museum building survives today, as a home furnishings showcase.

A great deal of scientific work was done by the society, especially around geology, and the results of this work can be found in the Proceedings of the Boston Society of Natural History which are now freely available online. A library and children's rooms were added to the museum around 1900. It was renamed the Museum of Science in 1939, under the directorship of Henry Bradford Washburn, Jr., a renowned American mountaineer.

Museum Then and Now, an exhibit of artifacts from the early years of the society, is located near the second floor Blue Wing entrance to the Theater of Electricity in today's museum.

After World War II, the old Museum of Science building was sold, and the museum was relocated, again under the name Boston Museum of Science. Under the leadership of Bradford Washburn, the society negotiated with the Metropolitan District Commission for a 99-year lease of the land on the Charles River Dam Bridge, now known as Science Park. The museum pays $1 a year to the state for use of the land. Construction and development began in 1948, and the museum opened in 1951, arguably the first all-encompassing science museum in the country.

In these first few years, the museum developed a traveling planetarium, a version of which is still brought to many elementary schools in the Greater Boston area every year. They also obtained during these early years "Spooky", a great horned owl who became a symbol or mascot of the museum; he lived to age 38, the longest any great horned owl is known to have lived. Today, a number of other taxidermed specimens remain on display, teaching children about the animals of New England and of the world.

The Science Park/West End MBTA station was opened in August 1955, allowing easier access to the museum by public transportation. The Charles Hayden Planetarium was opened in 1958.

Many more expansions continued into the 1970s and 1980s. In 1999, The Computer Museum in Boston closed and became part of the Museum of Science, integrating some of its displays, although the most of the historical artifacts were moved to the Computer History Museum in Mountain View, California.

A major renovation and expansion took place during 2005 and 2006. In 2010, the Charles Hayden Planetarium was closed for renovation, and has since reopened.

The main entrance to the museum straddles the border between the cities of Boston and Cambridge, and the boundary is indicated by a marker embedded in the floor inside the museum. In 2013, the Museum of Science was the venue for the first joint session of the Boston and Cambridge city councils, to discuss policy measures to improve retention of talented recent university graduates in the area.

Starting in 2013, the Museum of Science has been undergoing a major renovation to upgrade the physical structure and develop new educational content. This $250 million campaign will upgrade nearly half of the Exhibit Halls from 2012, and open three new major exhibits: the Hall of Human Life, the Yawkey Gallery on the Charles River, and What Is Technology? The Hall of Human Life opened in November 2013 in the newly expanded Level 2 of the Green Wing, and has a focus on human biology. The audio kinetic sculpture Archimedean Excogitation has been moved to the atrium to make way for a new exhibit in the lower lobby called The Yawkey Gallery on the Charles River. This exhibit opened in 2016, creating a new entry to the museum with better views of the Charles River and Boston-Cambridge skyline.

On October 18, 2016 former mayor of New York City Michael Bloomberg revealed that his foundation, Bloomberg Philanthropies, is donating $50 million to the museum, the largest gift in the institution's 186-year history.

The museum also opened a new exhibit named Wicked Smart: Invented in the Hub which has information about new technologies, especially those created in or around the Boston area. This new exhibit also contains a few interactive activities including a wheel chair visitors can sit in and an Xbox Kinect and projector.

In March 2020, the Museum of Science closed indefinitely due to the COVID-19 pandemic and transitioned to online learning. The Museum reopened on July 26. 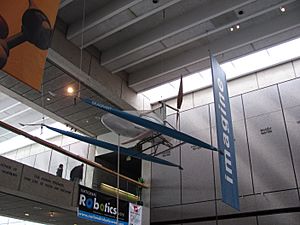 Decavitator hanging above the main entrance lobby of the museum 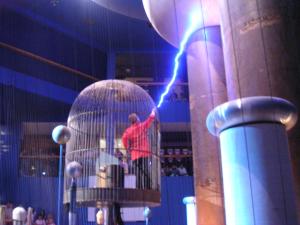 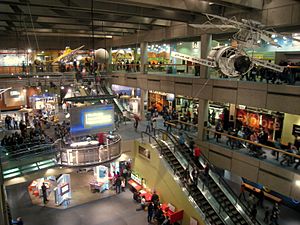 The many exhibits in the Blue Wing

The Museum of Science spans the length of the Charles River Dam, including a dedicated parking garage at far left. The Leonard P. Zakim Bunker Hill Memorial Bridge is visible in the background

The MoS has extensive educational programs from pre-school up through adult programming, including lecture series, concerts, films, workshops, and public policy discussions.

Special "overnight" programs invite students in grades 1–7, as well as Scout groups, to spend a night at the museum.

Tech Studio is an exhibit on the first level in the Blue Wing that sees about 200–800 visitors a day. It includes various different design challenges and other more one-on-one "cart activities" for visitors. The design center includes about a dozen activities for visitors to attempt while learning about the engineering process run twice a day from 10am-12pm and from 1:30pm–3:30pm during the school year, and also 4:30pm–6:30pm during the summer. The cart activities include robotics and circuitry and are more meant for teaching visitors about new technology. All activities also include a magnet for visitors who attempted the activities.

Monsters, Inc. characters Sulley and Mike at The Science Behind Pixar exhibition 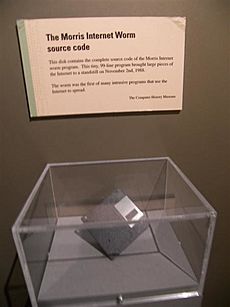 A disk containing the source code for the Morris worm was located in the museum's Computing Revolution exhibit.

Although the history artifacts of The Computer Museum (TCM) were moved from Boston to Silicon Valley to become the core of the current Computer History Museum, some former TCM educational exhibits and objects were transferred to the Boston Museum of Science where two new computing and technology exhibits were created. The Computing Revolution, an exhibit no longer on display at the Museum of Science, related the history of computing through a variety of hands-on interactive exhibits. Cahners ComputerPlace, previously located in the Blue Wing, Level 1, housed displays ranging from educational video games to an interactive AIBO ERS-7 robot. The first integrated quantum computing system, developed by MOS Director of Strategic Projects Carol Lynn Albert in collaboration with IBM, is on display as part of MOS's computing exhibits.

All content from Kiddle encyclopedia articles (including the article images and facts) can be freely used under Attribution-ShareAlike license, unless stated otherwise. Cite this article:
Museum of Science (Boston) Facts for Kids. Kiddle Encyclopedia.