The Leonard P. Zakim (/ˈzeɪkəm/) Bunker Hill Memorial Bridge (also known as the "Lenny" or “The Zakim”) is a cable-stayed bridge completed in 2003 across the Charles River in Boston, Massachusetts. It is a replacement for the Charlestown High Bridge, an older truss bridge constructed in the 1950s. Of ten lanes, using the harp-style system of nearly-parallel cable layout, coupled with the use of "cradles" through each pylon for the cables, the main portion of the Zakim Bridge carries four lanes each way (northbound and southbound) of the Interstate 93 and U.S. Route 1 concurrency between the Thomas P. "Tip" O'Neill Jr. Tunnel and the elevated highway to the north. Two additional lanes are cantilevered outside the cables, which carry northbound traffic from the Sumner Tunnel and North End on-ramp. These lanes merge with the main highway north of the bridge. I-93 heads toward New Hampshire as the "Northern Expressway", and US 1 splits from the Interstate and travels northeast toward Massachusetts' North Shore communities, crossing the Mystic River via the Tobin Bridge.

The bridge and connecting tunnel were built as part of the Big Dig, the largest highway construction project in the United States. The northbound lanes were finished in March 2003, and the southbound lanes in December. The bridge's unique styling quickly became an icon for Boston, often featured in the backdrop of national news channels, to establish location, and included on tourist souvenirs. The bridge is commonly referred to as the "Zakim Bridge" or "Bunker Hill Bridge" by residents of nearby Charlestown.

The Leverett Circle Connector Bridge was constructed in conjunction with the Zakim Bridge, allowing some traffic to bypass it.

The bridge concept was designed by Swiss civil engineer Christian Menn in collaboration with bridge designer Miguel Rosales and its design was engineered by American civil engineer Ruchu Hsu with Parsons Brinckerhoff. Wallace Floyd Associates, sub-consultants to Bechtel/Parsons Brinckerhoff, was the lead architect/urban designer and facilitated community participation during the design process. The engineer of record is HNTB/FIGG. The lead designers were Theodore Zoli (from HNTB), Sajal Banerjee and W. Denney Pate (from FIGG). The bridge follows a new design in which, besides having its eight primary lanes running through the towers, a pair of northbound lanes are cantilevered outside of the cable-stays. It has a striking, graceful appearance that is meant to echo the tower of the Bunker Hill Monument, which is within view of the bridge, and the white cables evoke imagery of the rigging of the USS Constitution, docked nearby. 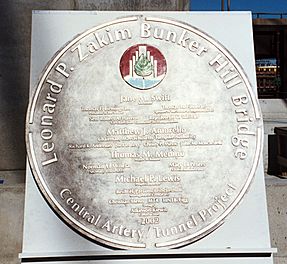 Image of the dedication plaque for the bridge

The bridge's full name commemorates Boston area leader and civil rights activist Leonard P. Zakim who championed "building bridges between peoples", and the Battle of Bunker Hill. Originally, Massachusetts Governor A. Paul Cellucci sought to name it the "Freedom Bridge". In 2000, however, local clergy and religious leaders, including Cardinal Bernard Francis Law, requested the Zakim name shortly after Zakim's death from myeloma. Although Cellucci agreed to the naming, community leaders from Charlestown objected to the name as they felt that since the design reflected the nearby Bunker Hill memorial, it should be named the "Bunker Hill Freedom bridge". Allegations of antisemitism were leveled against members of the mostly white, Irish Catholic community as reasons for resistance to the Zakim name, based on some comments quoted in the Boston Globe. Several local neo-Nazis also complained about the honor for Zakim and launched an unsuccessful petition drive to drop his name from the Bunker Hill one (the petition needed 100 signatures to be reviewed by the Massachusetts State Legislature and only 20 people signed it). In response, several community leaders spoke out against the allegations in a press conference, stating that the claims, made by Professor Jonathan Sarna, were his alone and did not reflect the community's historical (not racial) basis of favoring the "Bunker Hill" name, though they dodged questions about the false claim that no Jews had fought in the battle of Bunker Hill.

Eventually a compromise between the Boston City Council, the Massachusetts State Legislature and community activists brought about the current name. As with the Hoover Dam, different communities call the bridge by different colloquial names.

Placement of footings for the Zakim Bridge required environmental permits to relocate areas of open water surface, changing the contour of the Charles River shoreline. The process of landscape design and environmental mitigation under the bridge deck and around the bridge supports allowed for the creation of a new and accessible public landscape designed by Carol R. Johnson Associates. This under bridge landscape contains a series of perforated stainless steel lighting-based public artworks, entitled, Five Beacons for the Lost Half Mile. 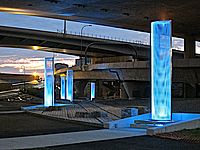 Under Zakim Bridge, Five Beacons for the Lost Half Mile, blue phase 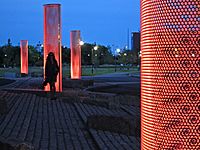 Five Beacons for the Lost Half Mile, orange phase, view to West

Pedestrians and cyclists are able to travel from Charlestown toward Cambridge over the adjacent North Bank Pedestrian Bridge to North Point Park. This bridge is a link in the Charles River Bike Path.

The bridge was dedicated on October 4, 2002, in a ceremony held on the new span. The dedication speakers included members of Zakim's family, government officials, and a performance of the song "Thunder Road" by Bruce Springsteen.

Introducing the song, Springsteen said about Zakim, "... I knew him a little bit during the last year of his life, he was one of those people whose, intensity, inner spirit you could feel even when he was very ill and uh. ... I guess, you know, we honor his memory obviously not with this beautiful bridge, very lovely, but by continuing on in his fight for social justice."