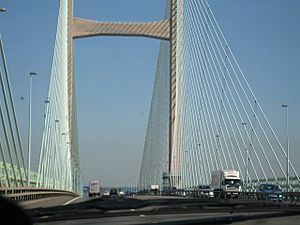 Cable-stayed bridge, of the "harp" type, over the River Severn

A cable-stayed bridge is a bridge that has one or more columns (called towers or pylons), with cables supporting the bridge deck.

Compared to other bridge types, the cable-stayed is best for longer spans than used for cantilever bridges, and shorter than those needing a suspension bridge. Cantilever spans become too heavy if they were made longer. A cable-stay bridge is cheaper to build than a suspension bridge over a short distance.

All content from Kiddle encyclopedia articles (including the article images and facts) can be freely used under Attribution-ShareAlike license, unless stated otherwise. Cite this article:
Cable-stayed bridge Facts for Kids. Kiddle Encyclopedia.