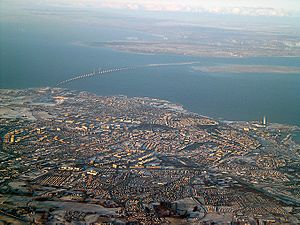 Malmo (Swedish: Malmö, Danish: Malmø) is the third largest city in Sweden. About 333,633 people lived there in 2017. It is in the south west part of Sweden, by the sea. The Öresund bridge goes from Malmö to Copenhagen. In the 15th century, Malmö was one of Denmark's largest cities.

Malmö has the biggest Middle Eastern community in Sweden. It is warm in the summer. In winter it is not quite as cold as in other parts of Sweden.

All content from Kiddle encyclopedia articles (including the article images and facts) can be freely used under Attribution-ShareAlike license, unless stated otherwise. Cite this article:
Malmö Facts for Kids. Kiddle Encyclopedia.