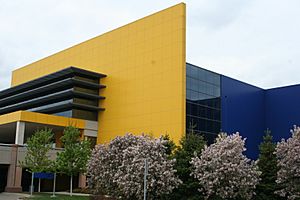 An IKEA store in Minnesota 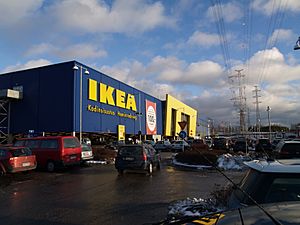 An IKEA store and parking lot in Finland 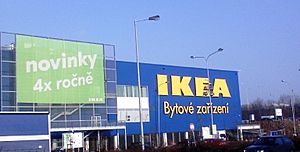 An IKEA store in Cerny Most, Prague

IKEA is a Swedish home furnishing retailer. It has 202 large stores in 32 countries as of winter 2005. Most are throughout Europe, the rest are in the US, Canada, Asia and Australia. The IKEA Catalogue, containing about 12,000 IKEA products is reputedly the second most widely distributed book after the Bible with a hundred million copies produced every year.

IKEA is pronounced ee-kay-uh by Swedes and other continental Europeans. In the English-speaking world it is pronounced "eye-KEE-uh", rhyming with the word "idea". 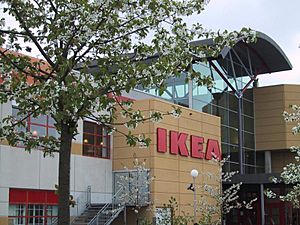 The company was founded by Ingvar Kamprad at age 17 in 1943. The name is a composite of the first letters in his personal name, the names of the property and the village where he grew up. Originally IKEA sold pens, wallets, picture frames, table runners, watches, jewellery and nylon stockings or practically anything Kamprad found a need for that he could fill with a product at a reduced price. The first furniture was introduced into the IKEA product range in 1947 and in 1955, IKEA began to design its own furniture.

At first Kamprad sold his goods out of his home and by mail order, but eventually a store was opened in the nearby town of Älmhult. It was also the location for the first IKEA "warehouse" store which came to serve as a model for IKEA establishments elsewhere and in 1963 the first store outside Sweden was opened in Asker, a Norwegian municipality outside Oslo.

IKEA furniture is well-known for its modern (often unusual) design, and because much of it is self-assembly furniture (also known as "flatpack"), designed to be assembled by the consumer rather than being sold pre-assembled. IKEA claims this permits them to reduce costs and use of packaging by not shipping air — the volume of a bookcase, for example, is considerably less if it is shipped disassembled rather than assembled.

Newer IKEA stores are usually very large blue boxes with few windows. They are often designed around a mandatory "one-way" layout which forces consumers to traverse nearly all parts of the store before reaching the cashier or check-out stands. The sequence involves going through furniture showrooms and housewares first, then the warehouse where one collects flat-packs for products seen in the showrooms, and then the cashier.

This design has the advantage of making consumers encounter IKEA products which they might not have thought to look for, but has the disadvantage of inconveniencing consumers who already know what they want to buy and just want to return to the warehouse area.

Recently, in some stores, shortcuts have been introduced between various sections, making travel time though the store much shorter if necessary. However, though they may be indicated on store maps, these shortcuts are often not obvious so an inexperienced IKEA shopper is likely to overlook them and travel through the whole layout of the store.

Many stores include restaurants serving typically Swedish food. The restaurant area is usually the one place in the store where there are large windows. Outside of Sweden these restaurants are sometimes complemented by mini-shops selling Swedish-made, Swedish-style groceries. As would be expected with Ikea, you can buy Ikea's specialities, such as Swedish Meatballs, in parts (i.e. the ingredients) at these stores and assemble it (i.e. simple, straighforward food preparation) at home.

All content from Kiddle encyclopedia articles (including the article images and facts) can be freely used under Attribution-ShareAlike license, unless stated otherwise. Cite this article:
IKEA Facts for Kids. Kiddle Encyclopedia.