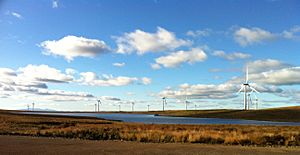 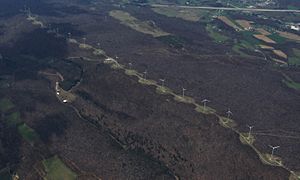 A wind farm is a group of wind turbines in the same area. These turbines turn moving air into electricity. A large wind farm has several hundred wind turbines, and covers an area of hundreds of square miles. A wind farm may also be offshore.

All content from Kiddle encyclopedia articles (including the article images and facts) can be freely used under Attribution-ShareAlike license, unless stated otherwise. Cite this article:
Wind farm Facts for Kids. Kiddle Encyclopedia.