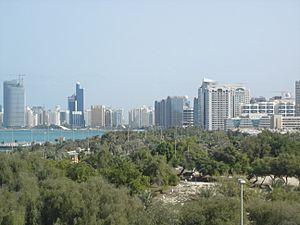 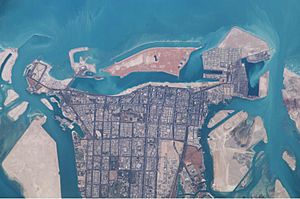 This page is about the city. For the emirate, see Abu Dhabi (emirate).

People started to live in the area and call it Abu Dhabi about 300 years ago. In the 1970s, the Bani Yas tribe made Abu Dhabi their capital city. Shakhbut bin-Dhiyab Al Nahyan became the leader of the city in 1818. People found oil in 1958 in Abu Dhabi. They started to sell the oil in the 1960s. In 1971, Abu Dhabi joined the United Arab Emirates and became the capital city.

Abu Dhabi has many tourist attractions such as the Sheikh Zayed Mosque [1], Abu Dhabi Louvre Museum, Ferrari World and the Emirates Palace. According to the Department of Culture and Tourism, 4.9 million people visited Abu Dhabi in 2017.

All content from Kiddle encyclopedia articles (including the article images and facts) can be freely used under Attribution-ShareAlike license, unless stated otherwise. Cite this article:
Abu Dhabi Facts for Kids. Kiddle Encyclopedia.