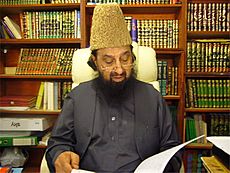 Sheikh — also spelled Sheik or Shaikh or Shekh — is an honorific in the Arabic language. It means "elder" and often means "leader and/or governor". It is commonly used for the front man of a tribe. He can be an Islamic scholar who got this title after graduating from a basic Islamic school. Sheikha is the female term. These are uncommon in the Arabic world. A sheikh who is wise is called ḥakīm and can rule.

The word is also generally used for a man over forty or fifty years of age.

In Bangladesh, India and Pakistan, "Sheikh" is a common surname among Muslims. It generally means there is Arab ancestry.

All content from Kiddle encyclopedia articles (including the article images and facts) can be freely used under Attribution-ShareAlike license, unless stated otherwise. Cite this article:
Sheikh Facts for Kids. Kiddle Encyclopedia.