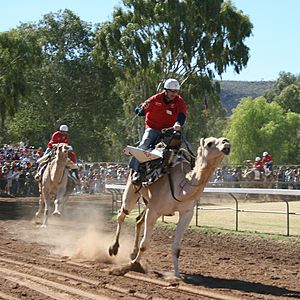 Camel racing during the 2009 Camel Cup held in Alice Springs 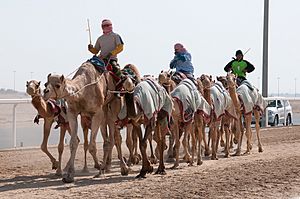 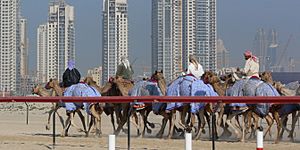 Camel racing is a popular sport in Western Asia, North Africa, the Horn of Africa, Pakistan, Mongolia and Australia. Professional camel racing, like horse racing, is an event for betting and tourist attraction. Camels can run at speeds up to 65 km/h (18 m/s; 40 mph) in short sprints and they can maintain a speed of 40 km/h (11 m/s; 25 mph) for an hour. Camels are often controlled by child jockeys, but allegations of human rights abuses have led to nationwide bans on underage labor in the UAE and Qatar. In modern camel racing, camels are often controlled by remote controlled robotic whips.

A major camel race is the Camel Cup held at Alice Springs which is the second biggest prize purse camel race in Australia. It is held annually and includes not only the camel races themselves, but also a collection of market stalls and other entertainment.

The biggest prize money camel race in Australia is "The Boulia desert Sands" with a A$500,000 prize purse in Queensland.

The United Arab Emirates was the first to ban the use of children under 15 as jockeys in camel racing when Sheikh Hamdan bin Zayed Al Nahyan announced the ban on 29 July 2002.

All content from Kiddle encyclopedia articles (including the article images and facts) can be freely used under Attribution-ShareAlike license, unless stated otherwise. Cite this article:
Camel racing Facts for Kids. Kiddle Encyclopedia.