Navi Mumbai is a planned satellite city of Mumbai, on the west coast of Maharashtra in India. It was developed in 1972 as a new urban township of Mumbai, and is currently the largest planned city in the world.

Navi Mumbai, located in the eastern harbour of Mumbai, is one of the world's largest planned townships. Since independence, there was a specific reason to build a new city on the mainland across the harbour: to lower the population of Mumbai, an island city whose physical expansion had a limit. It was regarded as an alternative for the many people who wanted to come to Mumbai from all over India. This decision required the Maharashtra government to relocate its seat of governance along with all its important offices to this new city, and completely stop the backbay reclamation project in the island city. It did not do this. It continued with the reclamation and put brakes on the efforts of CIDCO (such as the shifting of wholesale markets). 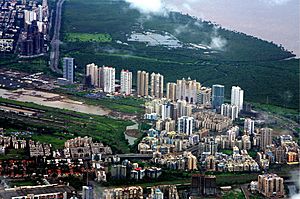 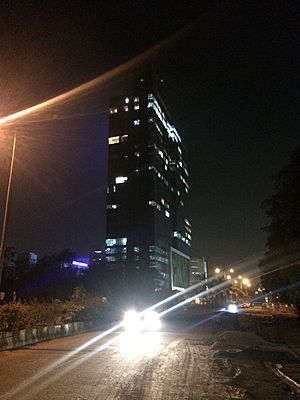 Planning of Navi Mumbai did not fully begin until 1971. South Navi Mumbai is being quickly developed with modern infrastructure in parts of Kharghar, Kamothe, New Panvel and Kalamboli. 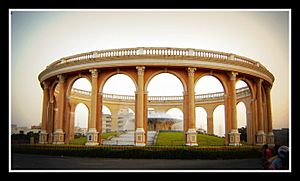 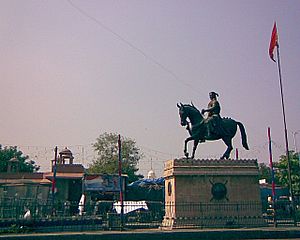 The City and Industrial Development Corporation (CIDCO) was formed on 17 March 1971, under the Indian Companies Act, 1956. The area covered 150 kilometres (93 mi) of the total 720 kilometres (450 mi) of the Konkan coast. Privately owned land with 86 villages covering 15,954 hectares (39,420 acres) within the present limits of Navi Mumbai and further villages measuring an additional 2,870 hectares (7,100 acres) were acquired by the government of Maharashtra.

CIDCO planned and constructed all the railway stations in Navi Mumbai and developed nearby areas commercially. 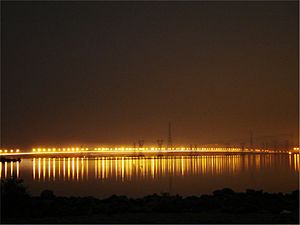 Vashi Bridge across the creek.

In 1973, the Vashi bridge was opened to the public for residents of Vashi, CBD Belapur and Nerul. The Sion-Panvel Expressway was built to reduce the time taken to travel from Sion to Panvel. Initially there was not much response to the new city. Major changes took place only after 1990, with the commissioning of a wholesale agricultural produce market at Vashi and the construction of a commuter railway line from Mankhurd to Vashi in May 1992. These developments caused a sudden growth in economic activities and population in Navi Mumbai.

A new railway line between Nerul and Uran is under construction. Kharghar and Panvel are experiencing major infrastructural developments due to their being close to the proposed Navi Mumbai International PAIRAirport.

When Navi Mumbai was created in 1970s, CIDCO was the only authority that looked after the development and maintenance of the city. CIDCO made a developmental plan for Navi Mumbai covering 95 villages 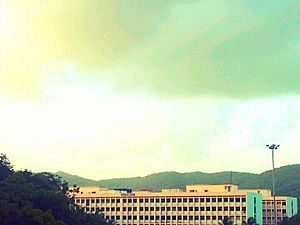 For the first ten years of the project CIDCO was the planning and administrative body, and as the developer and builder for the project. Taxes on property, land, commercial and water were payable to CIDCO. The 14 nodes which CIDCO created were named Airoli, Ghansoli, Kopar Khairane, Juhu Nagar, Vashi,Turbhe, Sanpada, Nerul, CDB Belapur, Kharghar, Kamothe, New Panvel, Kalamboli, Ulwe, Pushpak and Dronagiri. Each of the nodes is divided into smaller groups called sectors.

Initially only Juhu Vashi, Nerul and CBD Belapur were developed by CIDCO with housing, schools and community centre roads. But after the arrival of the harbour railway line extension in 1990s, there was an increase in population. CIDCO shifted its development plan to nodes like Kharghar, Kamothe, New Panvel, and Kopar Khairane. In its new development plan, CIDCO land was allocated to builders for housing. CIDCO only provided basic infrastructure like roads, water and electricity, these nodes were developed mostly by private builders according to the CIDCO plan.

On 17 December 1991, Navi Mumbai Municipal Corporation (NMMC) was created by the state government for maintaining some of the developed nodes of Navi Mumbai.

Local self-government started on 1 January 1992. NMMC was handed nine of the 25 nodes of the Navi Mumbai project area for its administration. However, CIDCO, as a planning authority, has rights on the open plots in these five nodes.

The nine nodes maintained by NMMC are CBD Belapur, Nerul, Vashi, Juhu Nagar, Turbhe, Kopar khairane, Ghansoli, Airoli, Digha, and Sanpada as of 1 January 1998, with the physical and social infrastructure already in place.

With annual budget exceeding Navi Mumbai Municipal Corporation, it is rated amongst the richest corporations in Maharashtra.

The municipal corporation is headed by a municipal commissioner and an elected mayor. There are 64 electoral wards in Navi Mumbai. A corporator is elected for each of the wards.

The newly developed nodes of Navi Mumbai on the south: Kharghar, Kamothe, New Panvel and Kalamboli are still maintained by CIDCO. These nodes, which are all beyond CBD Belapur, come under the Raigad district and are under the maintenance of CIDCO.

All content from Kiddle encyclopedia articles (including the article images and facts) can be freely used under Attribution-ShareAlike license, unless stated otherwise. Cite this article:
Navi Mumbai Facts for Kids. Kiddle Encyclopedia.