Coronavirus disease 2019 (COVID-19) is an infectious disease caused by SARS coronavirus 2 (SARS-CoV-2), a virus closely related to the SARS virus.

The disease is the cause of the COVID-19 pandemic. Those who get the disease might get a fever, dry cough, fatigue (tiredness) and shortness of breath. A sore throat, runny nose or sneezing is less common. In very bad cases, they can even get a much worse fever, fewer white blood cells, and loss of appetite. They might cough up blood, and have kidney failure.

People with this disease can get pneumonia and multi-organ failure if they are weak, old, or are already sick. There are people who are called asymptomatic carriers, which means that they did not have all or some of the symptoms of the virus. This is very dangerous since they may not know that they have the virus and can give it to other people without knowing it.

The countries with the most sick people are the USA, Brazil, and India. COVID-19 virus travels from person to person through the air like the common cold does. Scientists disagree about whether the virus is able to hang in the air a long time and go far like the measles virus does.

According to the United States Centers for Disease Control and Prevention, COVID-19 makes people feel sick in different ways, but it usually affects the lungs. People usually cough and have difficulty breathing. They often also have a fever, chills, headache, pain in their muscles, or trouble tasting or smelling things.

According to an April 2020 study by the American Gastroenterological Association, COVID-19 can make sick people vomit or have diarrhea but this is rare. They said about 7.7% of COVID-19 patients threw up, about 7.8% had diarrhea and about 3.6% had pain in their stomachs.

In February 2020, the World Health Organization announced they had chosen a name for the disease caused by SARS-CoV-2: COVID-19, replacing the temporary name "2019-nCoV." "Co" is for "corona," "Vi" for "virus," and "D" for "disease," and "19" for the year 2019. They said they did not want the name to have any person, place, or animal in it, like "Wuhan," because then people might blame the disease on that place, person, or animal. They also wanted the name to be easy to say out loud.

How the virus causes disease

The expanding part of the lungs, pulmonary alveoli, have two main types of cells. One cell, type I, absorbs from the air, i.e. gas exchange. The other, type II, produces surfactants, which help keep the lungs fluid, clean, infection free, etc. COVID-19 finds a way into a surfactant producing type II cell, and smothers it by reproducing COVID-19 virus within it. Each type II cell which is killed by the virus causes an extreme reaction in the lungs. Fluids, pus, and dead cell material flood the lung, causing the coronavirus pulmonary disease.

According to doctors and scientists from Columbia University, the virus damages the inside of the blood vessels, which causes blood clotting. The blood clots travel through the body and can damage the heart, kidneys and other systems. The virus can also damage organs by itself. In New York City hospitals, 50% of COVID-19 patients had kidney failure in some way. The scientists said that the kidneys have many ACE2 receptors, the same receptor that SARS-CoV-2 uses to sneak into cells.

Some scientists, for example Robert Stevens of Johns Hopkins University in Baltimore, are starting studies to watch people who have recovered from COVID-19 to see what long-term effects they have. Scientists think that people who have COVID-19 and do not die might still have lung or brain damage for the rest of their lives.

Other scientists saw that SARS-CoV-2 made the body make less of the male hormone testosterone and considered that SARS-CoV-2 could cause sterility the way the mumps and other viruses do. A sterile man cannot father children naturally.

Scientists saw that more people died from COVID-19 in places with large amounts of air pollution. One team of scientists from Martin Luther University Halle-Wittenberg looked at air pollution information from satellites and statistics on COVID-19 deaths in Italy, France, Germany and Spain and saw that places with large amounts of nitrogen dioxide pollution had more people die from COVID-19. Nitrogen dioxide can damage the lungs. 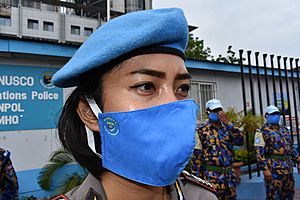 There are many ways to stop the spread of COVID-19. Washing hands for 20 seconds or more will help kill the viruses. Try not to touch your own face - eyes, nose, or mouth - with unwashed hands.

People should stay away from crowded places if they can, because being close to big groups of people can easily spread the virus. In fact, many health organizations say that people should stay at least two metres from another person.

Many people wear face masks in public to stop getting the virus, and it is recommended by countries such as China, Hong Kong and Thailand. Most face masks work best to stop you giving the virus to other people. When people with the virus wear masks they give it to less people. One study published in Cell showed that wearing a mask pulled down to cover the mouth but not the nose was not good. People usually breathe through their noses and not their mouths. Scientists found that nose cells were more likely to have virus in them than throat cells. Because of this, the scientists said, breathing out through the nose was more likely to spread the virus than breathing out through the mouth, so people should wear masks that cover their noses.

One study in China found the virus in semen from men with COVID-19. The scientists wondered if men could give COVID-19 to partners in sexual intercourse.

Experts recommend testing people for COVID-19. Some people may have SARS-CoV-2 in their bodies but not feel sick right away. These people can spread the virus to others.

A group of scientists from Hokkaido University developed an antibody test that could detect avian flu antibodies in only 20 minutes. They said their test could be changed to detect SARS-CoV-2.

In April 2020, the group Coalition for Epidemic Preparedness Innovations (CEPI) said that scientists were looking at 115 compounds that could be a vaccine. Anthony Fauci, director of the U.S. National Institute of Allergy and Infectious Diseases, says it takes 18 months to test a vaccine to make sure it works and is safe.

In April 2020, scientists from the University of Pittsburgh said they had made a vaccine, called PittCoVacc, and tested it in mice.

Another team of scientists led by Dr. Josef Penninger of the University of British Columbia invented a medicine called APN01. They tested APN01 in engineered human tissue. This is human cells put together to act like part of the body, but it is not a whole animal or person. They added a protein called "human recombinant soluble angiotensin converting enzyme 2" (hrsACE2) and saw that it stopped the virus from taking over cells. They named their hrsACE2 APN01.

This picure shows why its good to wash hands, and more so during this pandemic. If everyone washed their hands, they can help give doctors and other people who work in health and medicine more time to help people. 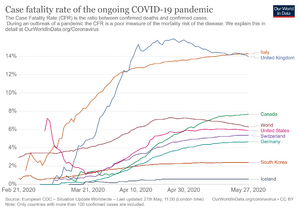 The current death rate of COVID-19

In late April 2020, a team from Oxford University said that they had developed a COVID-19 vaccine. The United States National Institutes of Health tested it in rhesus monkeys, and it worked. Because they had already been working on a vaccine against a different coronavirus, they had a head start working on one for SARS-CoV-2. They would try to test their vaccine on 6000 people by the end of May 2020, and that their vaccine could be ready for people to use in September 2020.

Other scientists are developing vaccines that use messenger RNA to teach the body to recognize the virus. They say mRNA vaccines will take less time to develop and make than protein or whole-virus vaccines.

In mid-May 2020, a company called Moderna said they tested their mRNA vaccine in forty-five people and eight of them produced antibodiesbut they did not publish the specific data or publish an article in a scientific journal. Anna Durbin of Johns Hopkins University said it was too soon to tell if people would keep the antibodies long enough for the vaccine to work. The United States Food and Drug Administration gave Moderna permission to test the vaccine again in more people. Moderna's chief medical officer said the vaccine could be ready in January 2021.

Some scientists gave SARS and MERS to llamas so the llamas' immune systems would make antibodies, or natural medicines, against those viruses, and they found a few antibodies that worked. In a May 2020 study, the scientists said this could work with SARS-CoV-2 too.

All content from Kiddle encyclopedia articles (including the article images and facts) can be freely used under Attribution-ShareAlike license, unless stated otherwise. Cite this article:
Coronavirus disease 2019 Facts for Kids. Kiddle Encyclopedia.