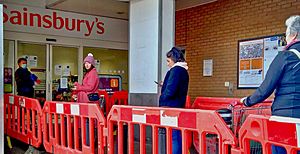 People maintaining social distance while waiting to enter a store. To allow shoppers to maintain distance within the store, only a limited number are allowed inside at one time.

Social distancing is a set of nonpharmaceutical infection control actions intended to stop or slow down the spread of a contagious disease. The objective of social distancing is to reduce the probability of contact between persons carrying an infection, and others who are not infected, so as to minimize disease transmission, morbidity and ultimately, mortality.

Social distancing is most effective when the infection can be transmitted via droplet contact (coughing or sneezing); direct physical contact, indirect physical contact (e.g. by touching a contaminated surface such as a fomite); or airborne transmission (if the microorganism can survive in the air for long periods).

During the 2019–2020 coronavirus pandemic, the World Health Organization (WHO) suggested the reference to "physical" as an alternative to "social", in keeping with the notion that it is a physical distance which prevents transmission; people can remain socially connected via technology.

Social distancing may be less effective in cases where the infection is transmitted primarily via contaminated water or food or by vectors such as mosquitoes or other insects, and less frequently from person to person.

Drawbacks of social distancing can include loneliness, reduced productivity, and the loss of other benefits associated with human interaction.

Historically, leper colonies and lazarettos were established as a means of preventing the spread of leprosy and other contagious diseases through social distancing, until transmission was understood and effective treatments were invented.

Some examples of social distancing used to control the spread of contagious illnesses include:

Preventing a sharp peak of infections, known as flattening the epidemic curve, keeps healthcare services from being overwhelmed, and also provides more time for a vaccine/treatment to be developed. Spreading the infections over a longer time frame allows healthcare services to better manage the volume of patients.

Research indicates that measures must be applied rigorously and immediately in order to be effective. During the 1918 flu pandemic, authorities in the US implemented school closures, bans on public gatherings, and other social distancing interventions in Philadelphia and in St. Louis, but in Philadelphia the delay of five days in initiating these measures allowed transmission rates to double three to five times, whereas a more immediate response in St. Louis was significant in reducing transmission there. Bootsma and Ferguson analyzed social distancing interventions in 16 US cities during the 1918 epidemic and found that time-limited interventions reduced total mortality only moderately (perhaps 10–30%), and that the impact was often very limited because the interventions were introduced too late and lifted too early. It was observed that several cities experienced a second epidemic peak after social distancing controls were lifted, because susceptible individuals who had been protected were now exposed.

School closures were shown to reduce morbidity from the Asian Flu by 90% during the 1957-58 outbreak, and up to 50% in controlling influenza in the US, 2004–2008. Similarly, mandatory school closures and other social distancing measures were associated with a 29% to 37% reduction in influenza transmission rates during the 2009 flu epidemic in Mexico.

Quarantine of contacts and suspected cases

During the 2003 SARS outbreak in Singapore, some 8,000 persons were subjected to mandatory home quarantine and an additional 4,300 were required to self-monitor for symptoms and make daily telephone contact with health authorities as a means of controlling the epidemic. Although only 58 of these individuals were eventually diagnosed with SARS, public health officials were satisfied that this measure assisted in preventing further spread of the infection. Voluntary self-isolation may have helped reduce transmission of influenza in Texas in 2009.

In 1995 a cordon sanitaire was used to control an outbreak of Ebola virus disease in Kikwit, Zaire. President Mobutu Sese Seko surrounded the town with troops and suspended all flights into the community. Inside Kikwit, the World Health Organization and Zaire medical teams erected further cordons sanitaires, isolating burial and treatment zones from the general population and successfully containing the infection. During the 2003 SARS outbreak in Canada, "community quarantine" was used to reduce transmission of the disease with moderate success.

During the 1918 influenza epidemic the town of Gunnison, Colorado isolated itself for two months to prevent an introduction of the infection. All highways were barricaded near the county lines. Train conductors warned all passengers that if they stepped outside of the train in Gunnison, they would be arrested and quarantined for five days. As a result of the isolation, no one died of influenza in Gunnison during the epidemic. Several other communities adopted similar measures.

Evidence suggesting that mass gatherings increase the potential for infectious disease transmission is inconclusive. Anecdotal evidence suggests that certain types of mass gatherings may be associated with increased risk of influenza transmission, and may also "seed" new strains into an area, instigating community transmission in a pandemic. During the 1918 influenza pandemic, military parades in Philadelphia and Boston may have been responsible for spreading the disease by mixing infected sailors with crowds of civilians. Restricting mass gatherings, in combination with other social distancing interventions, may help reduce transmission.

Border restrictions and/or internal travel restrictions are unlikely to delay an epidemic by more than 2–3 weeks unless implemented with over 99% coverage. Airport screening was found to be ineffective in preventing viral transmission during the 2003 SARS outbreak in Canada and the US. Strict border controls between Austria and the Ottoman Empire, imposed from 1770 until 1871 to prevent persons infected with the bubonic plague from entering Austria, were reportedly effective, as there were no major outbreaks of plague in Austrian territory after they were established, whereas the Ottoman Empire continued to suffer frequent epidemics of plague until the mid-nineteenth century.

A Northeastern University study published in March, 2020 found that "travel restrictions to and from China only slow down the international spread of COVID-19 [when] combined with efforts to reduce transmission on a community and an individual level...Travel restrictions aren’t enough unless we couple it with social distancing." The study found that the travel ban in Wuhan only delayed the spread of the disease to other parts of mainland China by three to five days, although it did reduce the spread of international cases by as much as 80 percent. A primary reason that travel restrictions were less effective is that many people with COVID-19 do not show symptoms during the early stages of infection.

Drawbacks of social distancing can include an economic slowdown, loneliness, reduced productivity, and the loss of other benefits associated with human interaction. In developing nations where remote technology and personal protective equipment are not in widespread use, it is often more difficult for a community to monitor the health of its members.

All content from Kiddle encyclopedia articles (including the article images and facts) can be freely used under Attribution-ShareAlike license, unless stated otherwise. Cite this article:
Social distancing Facts for Kids. Kiddle Encyclopedia.