Justin Drew Bieber (born March 1, 1994) is a Canadian singer, songwriter and multi-instrumentalist. Discovered at age 13 by talent manager Scooter Braun after he had watched his YouTube cover song videos, Bieber was signed to RBMG Records in 2008. With Bieber's debut EP My World, released in late 2009, Bieber became the first artist to have seven songs from a debut record chart on the Billboard Hot 100.

At 16 years old, Bieber released his debut studio album My World 2.0 (2010), which contained the hit single "Baby". The album debuted atop the US Billboard 200, making Bieber the youngest solo male act to top the chart in 47 years. Bieber had quickly established himself as a teen idol.

Following his debut album and promotional tours, he released his 3D biopic-concert film Justin Bieber: Never Say Never, which was a box office success. Bieber's next album, Under the Mistletoe (2011), became the first Christmas album by a male artist to debut at number one on the Billboard 200.

"Where Are Ü Now", a collaboration with Skrillex and Diplo released in 2015, marked a new era of Bieber's career, as he transitioned into EDM and moved away from teen pop. The song earned him a Grammy Award for Best Dance Recording.

In late 2015, Bieber's fourth studio album Purpose was released, which became his most commercially successful album. It produced three Billboard Hot 100 number-one singles: "What Do You Mean?", "Sorry", and "Love Yourself". After the release of Purpose, Bieber had featured on several successful collaborations, including "Cold Water", "Let Me Love You", "Despacito (Remix)", "I'm the One", "I Don't Care" and "10,000 Hours", all of which went top five in the US.

After taking some time off to focus on his marriage to Hailey Baldwin, Bieber released his fifth studio album, Changes, which became his seventh chart-topper in the US. This made Bieber, at the age of 25, the youngest solo artist to achieve seven number-one albums in the US.

Bieber was born in London, Ontario, at St Joseph's Hospital, and was raised in Stratford, Ontario. He is the only child of Jeremy Jack Bieber and Patricia "Pattie" Mallette. His mother is of French-Canadian descent; his paternal great-grandfather was of German ancestry, and his other roots are English, Scottish and Irish.

Bieber attended a French-language immersion elementary school in Stratford, the Jeanne Sauvé Catholic School. Growing up, he learned to play the piano, drums, guitar, and trumpet. He graduated from high school in Stratford, Ontario, the St. Michael Catholic Secondary School in 2012. In early 2007, aged 12, Bieber sang Ne-Yo's "So Sick" for a local singing competition in Stratford and was placed second. His mother posted a video of the performance on YouTube for their family and friends to see. She continued to upload videos of Bieber singing covers of various R&B songs, and Bieber's popularity on the site grew. 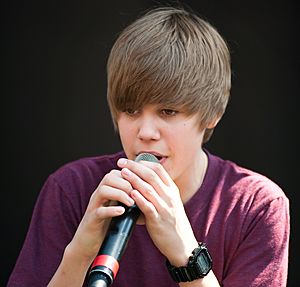 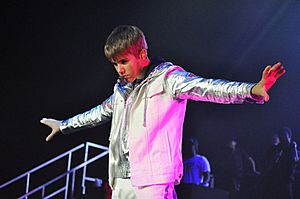 Bieber performing in Jakarta during his My World Tour

When searching for videos of a different singer, Scooter Braun, a former marketing executive of So So Def Recordings, clicked on one of Bieber's 2007 videos by accident. Impressed, Braun tracked down the theatre that Bieber was performing in, located Bieber's school, and finally contacted his mother. At 13, Bieber went to Atlanta, Georgia, with Braun to record demo tapes. Bieber began singing for Usher one week later. 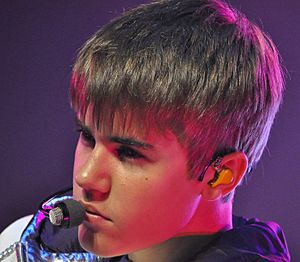 Bieber was soon signed to Raymond Braun Media Group (RBMG). Justin Timberlake was also reportedly in the running to sign Bieber but lost the bidding war to Usher. L.A. Reid signed Bieber to Island Records in October 2008. Bieber then moved to Atlanta with his mother to pursue further work in 2008.

Bieber's first single, "One Time", was released to radio while Bieber was still recording his debut album. The song reached number 12 on the Canadian Hot 100 during its first week of release in July 2009 and later peaked at number 17 on the Billboard Hot 100. During fall 2009, it had success in international markets. The song was certified platinum in Canada and the US and gold in Australia and New Zealand. 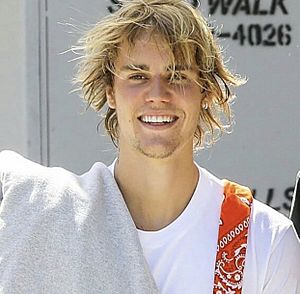 As Bieber resides in the United States, he is reported to possess an O-1 visa for temporary resident status, based on "extraordinary ability or achievement" in a field. In September 2018, TMZ reported that Bieber had begun the process of becoming an American citizen upon marriage to Hailey Baldwin.

In December 2010, Bieber began dating Selena Gomez. After separating in November 2012, they reconciled a few weeks later before splitting up again in January 2013. They later reconciled for a few months in each of 2013, 2014, and 2015. Late in 2017, it was reported that they had gotten back together again. However, they broke up again in March 2018.

Bieber became engaged to model Hailey Baldwin on July 7, 2018. They had briefly dated from December 2015 to January 2016 before splitting, then reconciled in May 2018. Bieber and Baldwin reportedly obtained a marriage license in September 2018, leading to reports that they had a civil marriage. On September 14, 2018, Baldwin stated on Twitter that she and Bieber had not yet married, but deleted the tweet afterward. On November 23, 2018, Bieber stated he was married to Baldwin.

Bieber and Baldwin had an official ceremony in Bluffton, South Carolina on September 30, 2019. 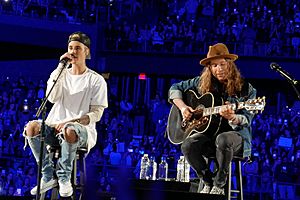 Justin Bieber during a concert at the Allstatae Arena in Rosemont, Illinois 2015

Throughout his career, Bieber has sold an estimated 140 million records, and is one of the best-selling music artists globally. On November 23, 2012, Bieber was presented with the Queen Elizabeth II Diamond Jubilee Medal by the Prime Minister of Canada, Stephen Harper. He was one of 60,000 Canadians to receive the Diamond Jubilee medal that year.

In 2013, Bieber received a Diamond award from the Recording Industry Association of America (RIAA) to recognize his single "Baby" as the highest-certified digital song of all time. Bieber has earned ten Grammy nominations (including one win), two Brit awards, four NRJ Music Award nominations (including three wins), thirteen Billboard Music Awards, and numerous fan voted accolades which include eight American Music Awards and twenty Teen Choice Awards. He also has won eighteen MTV Europe Music Awards, which is the most awards received by a single artist to date.

On November 13, 2015, the release of Purpose marked his sixth album to debut at number one. He also became the first artist, since Elvis Presley in 2005, to replace his own song as number one on the UK Singles Chart. As of 2016, Bieber has received fourteen titles in the Guinness World Records, which include eight that were achieved from the success of his album Purpose and was featured in the 2017 Edition. 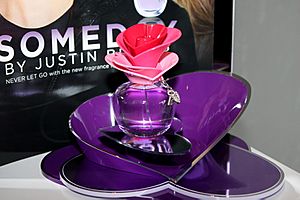 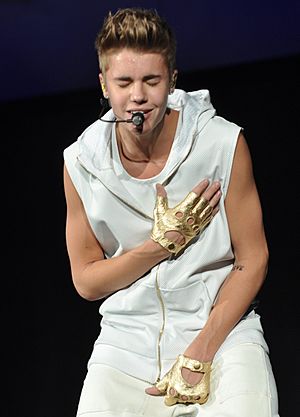 Bieber performing during his Believe Tour in 2012

All content from Kiddle encyclopedia articles (including the article images and facts) can be freely used under Attribution-ShareAlike license, unless stated otherwise. Cite this article:
Justin Bieber Facts for Kids. Kiddle Encyclopedia.