Faust Vrančić (Latin: Faustus Verantius; Italian: Fausto Veranzio; Hungarian and Vernacular Latin: Verancsics Faustus) (circa 1551 – January 17, 1617) was a polymath and bishop from Šibenik, then part of the Venetian Republic and today part of Croatia. 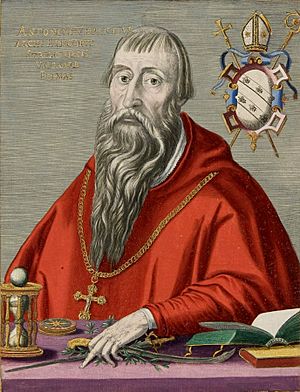 Fausto was born in Šibenik (Sebenico), Venetian Dalmatia into the family of counts Vrančić (Veranzio) who came from Bosnia (a branch of which later merged with Draganić family, creating the Counts Draganić-Vrančić), a notable family of writers and Berislavić family.

He was the son of Michele Veranzio, a Latin poet, and the nephew of Antonio (Croatian: Antun Vrančić), archbishop of Esztergom (1504–1573), a diplomat and a civil servant, who was in touch with Erasmus (1465–1536), Philipp Melanchthon (1497–1560), and Nikola Šubić Zrinski (1508–1566), who took Fausto with him during some of his travels through Hungary and in the Republic of Venice. Fausto's mother was from the Berislavić family. His brother, Giovanni, died still young in battle.

While the family's main residence was in city of Šibenik, they owned a big summer house on island Prvić, in place Šepurine, a neighboring place to Prvić-Luka (where he is buried in local church). The baroque castle that was used by Vrančić family as summer residence is now in possession of the Draganić family.

As a youth, Veranzio was interested in science. Still a child, he moved to Venice, where he attended schools, and then to Padua to join the University, where he focused on law, physics, engineering and mechanics.

At the court of King Rudolf II, at the Hradčany castle in Prague, Veranzio was chancellor for Hungary and Transylvania often in contact with Johannes Kepler and Tycho Brahe. After his wife's death, Veranzio left for Hungary. In 1598, he got the title of bishop of Csanád (Episcŏpus Csanadiensis) in partibus (even though he never set foot in Csanád). In 1609, back in Venice, he joined the brotherhood of Paul of Tarsus (barnabites) and committed himself to the study of science. Veranzio died in 1617 in Venice and was buried in Dalmatia, near his family's countryhouse on the island of Prvić.

Veranzio's masterwork, Machinae Novae (Venice 1615 or 1616), contained 49 large pictures depicting 56 different machines, devices, and technical concepts.
Two variants of this work exist, one with the "Declaratio" in Latin and Italian, the other with the addition of three other languages. Only a few copies survived and they often do not present a complete text in all the five languages. This book was written in Italian, Spanish, French and German. The tables represent a varied set of the projects, inventions and creations of the author. There Veranzio wrote about water and solar energy, the universal clock (Plates 6–7), several types of mills, agricultural machinery, various types of bridges in various materials, machinery for clearing the sea, a dual sedan traveling on mule (Plate 47), special coaches, and Homo Volans (Plate 38) a forerunner of the parachute. His work included a portable boat (Plate 39), that is to say a boat that, thanks to the same energy as the current may go against the river (Plate 40). It was his idea to use the printing rotary principle (e.g. grinding them printers, Plate 46) in order to alleviate the great difficulty of printers and improve results.

Despite the extraordinary rarity of this book (because the author published it at his own expense, without a publisher and having to stop printing because of lack of funds), the Machinae Novae was the work which mainly contributed to Veranzio's popularity around the world. His design pictures were even reprinted a few years later and published in China. 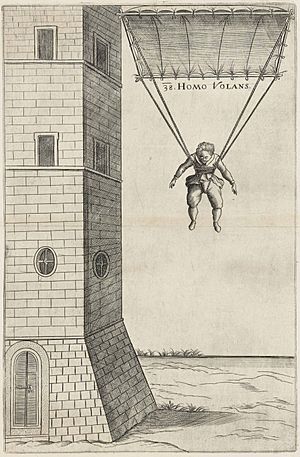 One of the illustrations in Machinae Novae is a sketch of a parachute dubbed Homo Volans ("The Flying Man"). Having examined Leonardo da Vinci's rough sketches of a parachute, Veranzio designed a parachute of his own. Paolo Guidotti already attempted to carry out Leonardo's theories, ending by falling on a house roof and breaking his thigh bone (about 1590); but while Francis Godwin was writing his flying romance The Man in the Moone", Fausto Veranzio is widely believed to have performed an actual parachute jumping experiment and, therefore, to be the first man to build and test a parachute: according to the story passed on, Veranzio, in 1617, at over sixty-five years of age, implemented his design and tested the parachute by jumping from St Mark's Campanile in Venice. This event was documented some 30 years later in a book Mathematical Magick or, the Wonders that may be Performed by Mechanical Geometry (London, 1648) written by John Wilkins, the secretary of the Royal Society in London.

However, in his Mathematical Magick, John Wilkins wrote about flying and about his persuasion that flying would become possible. Persons jumping from high towers and methods for slowing down their fall were not his concern. His treatise does not even mention the name of Fausto Veranzio, nor does it document any jump by parachute or any event at all in 1617. No evidence has ever been found that anybody ever tested Veranzio's parachute. 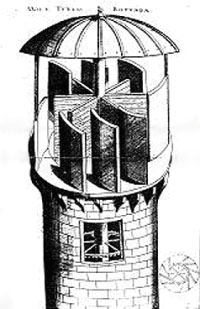 His areas of interest in engineering and mechanics were broad. Mills were one of his main point of research, where he created 18 different designs. He envisioned windmills with both vertical and horizontal axes, with different wing constructions to improve their efficiency. The idea of a mill powered by tides incorporated accumulation pools filled with water by the high tide and emptied when the tide ebbed, simply using gravity; the concept has just recently been engineered and used. The first wind turbines were described by Fausto Veranzio. In his book Machinae Novae (1616) he described vertical axis wind turbines with curved or V-shaped blades.

Urbanist and engineer in Rome and Venice

By order of the Pope, he spent two years in Rome where he envisioned and made projects needed for regulating rivers, since Rome was often flooded by the Tiber river. He also tackled the problem of the wells and water supply of Venice, which is surrounded by sea. Devices to register the time using water, fire, or other methods were envisioned and materialized. His own sun clock was effective in reading the time, date, and month, but functioned only in the middle of the day.

The construction method of building metal bridges and the mechanics of the forces in the area of statics were also part of his research. He drew proposals which predated the actual construction of modern suspension bridges and cable-stayed bridges by over two centuries. The last area was described when further developed in a separate book by mathematician Simon de Bruges (Simon Stevin) in 1586. Veranzio also designed the concept to modern tied-arch bridges, through arch bridges, truss bridges and aerial lifts. 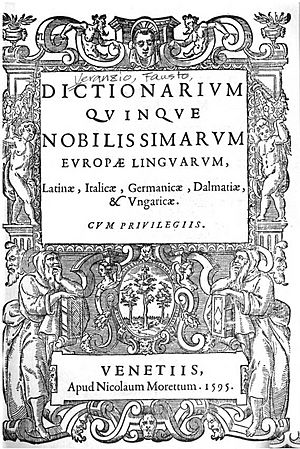 The Dictionarium is a very early and significant example of both Croatian and Hungarian lexicography, and contains, in addition to the parallel list of vocabulary, other documentation of these two languages. In particular, Veranzio listed in the Dictionarium 304 Hungarian words that he deemed to be borrowed from Croatian. Also, at the end of the book, Veranzio included Croatian language versions of the Ten Commandments, the Lord's Prayer, the Ave Maria and the Apostles' Creed.

In an extension of the dictionary called Vocabula dalmatica quae Ungri sibi usurparunt, there is a list of Proto-Croatian words that entered the Hungarian language. The book greatly influenced the formation of both the Croatian and Hungarian orthography; the Hungarian language accepted his suggestions, for example, the usage of ly, ny, sz, and cz. It was also the first dictionary of the Hungarian language, printed four times, in Venice, Prague (1606), Pozun (1834), and in Zagreb (1971). The work was an important source of inspiration for other European dictionaries such as an Hungarian and Italian dictionary written by Bernardino Baldi, a German Thesaurus polyglottus by humanist and lexicographer Hieronymus Megiser, and multilingual Dictionarium septem diversarum linguarum by Peterus Lodereckerus of Prague in 1605.

Only a few of Veranzio's works related to history remain: Regulae cancellariae regni Hungariae and De Slavinis seu Sarmatis in Dalmatia exist in manuscript form, while Scriptores rerum hungaricum was published in 1798. In Logica nova ("New logic") and Ethica christiana ("Christian ethics"), which were published in a single Venetian edition in 1616, Veranzio dealt with the problems of theology regarding the ideological clash between the Reformation movement and Catholicism. Tommaso Campanella (1568–1639) and the Archbishop of Split Marco Antonio de Dominis (1560–1624) were his intellectual counterparts.

When Ludwig Wittgenstein (1889–1951), Austrian-British philosopher and mathematician, moving from Berlin to England, began studying mechanical engineering in 1908, he was highly influenced by his reading of Renaissance technical treatises, particularly Veranzio's Machinae Novae.

The 17th century Brooklyn Tidal Mill in Long Island (NY), one of the most popular and few still standing mills in the New York City area, was built after the plan of Fausto Veranzio.

In 1965, "Faust Vrančić" Astronomy Society was founded in Šibenik.

In 1969, the medallion with his figure, work by Kosta Angeli Radovani, was embedded in the rector's chain of the University of Zagreb.

In 1992, the Croatian Parliament established the "Faust Vrančić" National Award for Technical Culture which is awarded to individuals, associations and other legal persons for outstanding achievements in technical culture.

In 1993, his bust was erected at the Nikola Tesla Technical Museum's Sculpture Garden of the Croatian Geniuses of Science and Technology.

In 2012, Faust Vrančić Memorial Centre was opened on the island of Prvić where visitors can learn more about Veranzio's life and see his most famous inventions.

Croatian Navy's rescue ship BS-73, as well as many schools and streets in Croatia, were named after him.

All content from Kiddle encyclopedia articles (including the article images and facts) can be freely used under Attribution-ShareAlike license, unless stated otherwise. Cite this article:
Fausto Veranzio Facts for Kids. Kiddle Encyclopedia.