Engineers in the nineteenth century knew that a bridge which was built across multiple supports would distribute the loads among them. This meant there would be lower stresses in the girder or truss and meant that longer spans could be built. Several nineteenth century engineers designed continuous bridges with hinge points mid-span. The use of a hinge in the multi-span system meant that engineers could better work out the loads and stresses on the bridge It also meant the bridge could handle the foundations settling at different rates.

Heinrich Gerber was one of the engineers to obtain a patent for a hinged girder (1866) and is recognized as the first to build one. The Hassfurt Bridge over the Main river in Germany has a central span of 124 feet (38 meters). Completed in 1867, it was the first modern cantilever bridge. Other early cantilever bridges included the High Bridge of Kentucky by C. Shaler Smith (1877), the Niagara Cantilever Bridge by Charles Conrad Schneider (1883) and the Poughkeepsie Bridge by John Francis O'Rourke and Pomeroy P. Dickinson (1889). The Kentucky River Bridge spanned a gorge that was 275 feet (84 meters) deep. It was built with a cantilver which meant that it did not need to be supported during the building. The most famous early cantilever bridge is the Forth Rail Bridge. This bridge held the record for longest span in the world for 17 years. 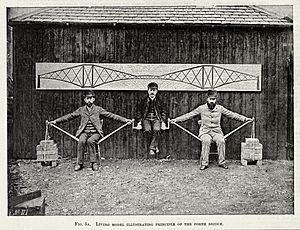 Cantilever Bridge.—A structure at least one portion of which acts as an anchorage for sustaining another portion which extends beyond the supporting pier.

A diagram of the parts of the John P. Grace Memorial Bridge

with as balanced cantilever, the span is balanced by cantilevers going in the opposite direction. If these are anchored into solid foundations, they are called anchor arms. In a bridge built on two foundation piers, there are four cantilever arms: two which span the obstacle, and two anchor arms which extend away from the obstacle. Because of the need for more strength at the balanced cantilever's supports, the bridge superstructure often takes the form of towers above the foundation piers. The Commodore Barry Bridge is an example of this type of cantilever bridge.

Steel truss cantilevers support loads by tension of the upper members and compression of the lower ones. Commonly, the structure distributes the tension through the anchor arms to the outermost supports, while the compression is carried to the foundations beneath the central towers.

Some steel arch bridges (such as the Navajo Bridge) are built using pure cantilever spans from each side. These are then joined with a pin, usually after forcing the meeting point apart. When the jacks are removed and the bridge decking is added the bridge becomes a truss arch bridge. Such unsupported construction is only possible if suitable rock is available to support the tension in the upper chord of the span during construction, usually limiting this method to the spanning of narrow canyons.

All content from Kiddle encyclopedia articles (including the article images and facts) can be freely used under Attribution-ShareAlike license, unless stated otherwise. Cite this article:
Cantilever bridge Facts for Kids. Kiddle Encyclopedia.