The Quebec Bridge (Pont de Québec in French) is a road, rail and pedestrian bridge across the lower Saint Lawrence River between Sainte-Foy (since 2002 a western suburb of Quebec City) and Lévis, Quebec, Canada. The project failed twice while under construction, in 1907 and 1916, at the cost of 88 lives and additional persons injured. It took more than 30 years to complete, eventually opening in 1919.

The bridge accommodates three highway lanes (there were none until 1929, when one was added; another was added in 1949, and a third in 1993), one rail line (two until 1949), and a pedestrian walkway (originally two). At one time it also carried a streetcar line. Since 1993, it has been owned by the Canadian National Railway.

The Quebec Bridge was designated a National Historic Site in 1995.

Before the Quebec Bridge was built, the only way to travel from the south shore of the St. Lawrence in Lévis to the north shore at Quebec City was to take a ferry or use the winter-time ice bridge. As far back as 1852 a project for a bridge over the St. Lawrence River at Quebec was considered. It was discussed in 1867, 1882, and 1884. After a period of political instability, through which Canada had four Prime Ministers in five years, Wilfrid Laurier, Member of Parliament for the federal riding of Quebec East, was elected on a Liberal platform in 1896. He led the push for the first Quebec bridge until he left office in 1911.

A March 1897 article in the Quebec Morning Chronicle noted:

The bridge question has again been revived after many years of slumber, and business men in Quebec seem hopeful that something will come of it, though the placing of a subsidy on the statute book is but a small part of the work to be accomplished, as some of its enthusiastic promoters will, ere long, discover. Both Federal and Provincial Governments seem disposed to contribute towards the cost, and the City of Quebec will also be expected to do its share. Many of our people have objected to any contribution being given by the city unless the bridge is built opposite the town, and the CHRONICLE like every other good citizen of Quebec would prefer to see it constructed at Diamond Harbor, and has contended in the interests of the city for this site as long as there seemed to be any possibility of securing it there. It would still do so if it appeared that our people could have it at that site. A bridge at Diamond Harbor would, it estimated, cost at least eight millions. It would be very nice to have, with its double track, electric car track, and roads for vehicles and pedestrians, and would no doubt create a goodly traffic between the two towns, and be one of the show works of the continent. 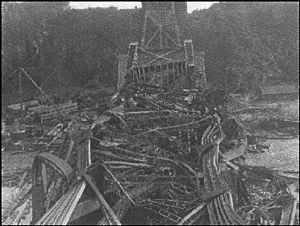 Wreckage of the 1907 collapse

In 1903, the bond issue was increased to $6,000,000 and power to grant preference shares was authorised, along with a name change to the Quebec Bridge and Railway Company (QBRC). An Act of Parliament the same year was necessary to guarantee the bonds by the public purse. Laurier was MP for Quebec East riding, while the president of the QBRC, Simon-Napoleon Parent, was Quebec City's mayor from 1894 to 1906, and simultaneously served as Premier of Quebec from 1900 to 1905.

Edward A. Hoare was selected as Chief Engineer for the Company throughout this time, while Collingwood Schreiber was the Chief Engineer of the Department of Railways and Canals in Ottawa. Hoare had never worked on a cantilever bridge structure longer than 300 ft. Schreiber was assisted until July 9, 1903 by Department bridge engineer R.C. Douglas, at which time Douglas was deposed for his opposition to the calculations that were submitted by the contractors. Schreiber subsequently requested the support of another qualified bridge engineer, but was effectively overruled by the Cabinet on August 15, 1903. Thereafter, QBRC consulting engineer Theodore Cooper was completely in charge of the works. On July 1, 1905, Schreiber was demoted and replaced as deputy minister and chief engineer by Matthew J Butler.

By 1904, the southern half of the structure was taking shape. However, preliminary calculations made early in the planning stages were never properly checked when the design was completed. The weight of the bridge was far in excess of its carrying capacity. The dead load was too heavy. All went well until the bridge was nearing completion in the summer of 1907, when the QBRC site engineering team under Norman McLure began noticing increasing distortions of key structural members already in place.

McLure became increasingly concerned and wrote repeatedly to QBRC consulting engineer Theodore Cooper, who at first replied that the problems were minor. The Phoenix Bridge Company officials claimed that the beams must already have been bent before they were installed, but by August 27 it had become clear to McLure that this was wrong. A more experienced engineer might have telegraphed Cooper, but McLure wrote him a letter, and went to New York to meet with him on August 29, 1907. Cooper agreed that the issue was serious, and promptly telegraphed to the Phoenix Bridge Company: "Add no more load to bridge till after due consideration of facts." The two engineers went to the Phoenix offices.

But, Cooper's message was not passed on to Quebec before it was too late. Near quitting time that same afternoon, after four years of construction, the south arm and part of the central section of the bridge collapsed into the St. Lawrence River in 15 seconds. Of the 86 workers on the bridge that day, 75 were killed and the rest were injured, making it the world's worst bridge construction disaster. Of these victims, 33 (some sources say 35) were Mohawk steelworkers from the Kahnawake reserve near Montreal; they were buried at Kahnawake under crosses made of steel beams.

On August 30, 1907, a Royal Commission of inquiry into the disaster was provisionally appointed by the Deputy Minister in charge of the Department of Railways and Canals (Butler), with the concurrence of the Minister. The Royal Commission, which was granted by Edward VII by advice of his Governor General, Albert Grey, on August 31, 1907, consisted of three members, who were all engineers of good standing: Henry Holgate, of Montreal, JGG Kerry, of Campbellford, Ontario, also an instructor at McGill University, and Professor John Galbraith, then dean of the Faculty of Applied Science and Engineering at the University of Toronto. The Commission document conferred upon the commissioners full powers to summon witnesses and documents, and to express "any opinion they may see to express thereon".

The Commissioners presented their Report in full on February 20, 1908, issued 15 conclusions, and included the hindsight work of consulting bridge engineer C.C. Schneider, of Philadelphia (a fulfillment of the 1903 request of Schreiber, supra).

(c) The design of the chords that failed was made by Mr. P.L. Szlapka, the designing engineer of the Phoenix Bridge Company

(d) This design was examined and officially approved by Mr. Theodore Cooper, consulting engineer of the Quebec Bridge and Railway Company.

(e) The failure cannot be attributed directly to any cause other than errors in judgment on the part of these two engineers.

Cooper escaped penal sanction. It is presumed that Szlapka escaped as well. The Commissioners also found that:

The abortive construction of the Quebec Bridge spanned the careers of two Ministers of Railways and Canals, and one temporary replacement, who was on the job for five months immediately preceding the disaster. A popular myth is that the iron and steel from the collapsed bridge, which could not be reused for construction, was used to forge the early Iron Rings worn by graduates of Canadian engineering schools starting in 1925.

Drawing of the original design of Quebec Bridge

Second design and collapse of September 11, 1916 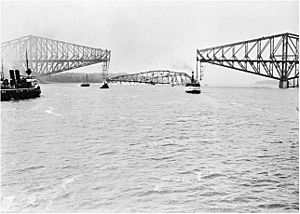 After a Royal Commission of Inquiry into the collapse, construction started on a second bridge. Three engineers were appointed: H. E. Vautelet, a former engineer for the Canadian Pacific Railways, Maurice FitzMaurice from Britain, who worked on the construction of the Forth Bridge, and Ralph Modjeski from Chicago, Illinois. Vautelet was President and Chief Engineer. The new design was again for a bridge with a single long cantilever span, but with a more massive structure.

On September 11, 1916, when the central span was being raised into position, it fell into the river, killing 13 workers. The chief engineer was made aware of the problem six weeks before the collapse. The chief engineer had been alerted to a problem by Frants Lichtenberg, the engineer responsible for the construction of the centre section. Lichtenberg was also working as an inspector for the federal government of Canada at the time. Fears of German sabotage were reported, because the Great War had begun, but it became apparent that the structure had suffered a construction accident (a problem with the hoisting devices).

Re-construction began almost immediately after the accident, and the government granted special permission for the bridge builders to acquire the needed steel. It was in high demand because of the War effort. The fallen central span still lies at the bottom of the river. After the bridge was completed in 1917, special passes were required for those wanting to cross the bridge. Armed soldiers, and later Dominion Police, guarded the structure and checked passes until the end of the War. 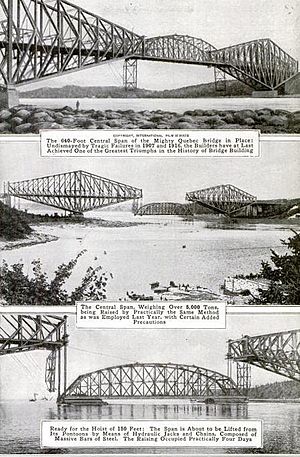 Lifting the centre span in place was considered to be a major engineering achievement. Photo caption from Popular Mechanics magazine, December 1917

Construction was ultimately completed in August 1919, at a total cost of $23 million and the lives of 88 bridgeworkers. On December 3, 1919, the Quebec Bridge opened for rail traffic, after almost two decades of construction. Its centre span of 549 metres (1800 ft) remains the longest cantilevered bridge span in the world and is considered a major engineering feat. The Quebec Bridge was declared an International Historic Civil Engineering Landmark in 1987 by the Canadian and American Society of Civil Engineers. 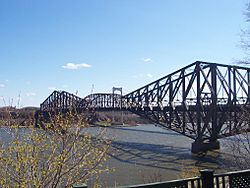 The bridge seen from the Parc Aquarium du Québec.

The bridge was built and designed primarily as a railway bridge, but the streetcar lines (used by Quebec Railway, Light & Power Company) and one of the two railway tracks were converted into automobile and pedestrian/cycling lanes in subsequent years. In 1970 the Pierre Laporte Suspension Bridge opened just upstream to accommodate freeway traffic on Autoroute 73.

On January 24, 1996, the bridge was declared a National Historic Site.

The bridge has been featured on two commemorative postage stamps, one issued by the Post Office Department in 1929, and another by Canada Post in 1995.

Despite its private ownership, CN receives federal and provincial funding to undertake repairs and maintenance on the structure. Its railway designation is mile 0.2 subdivision Bridge. 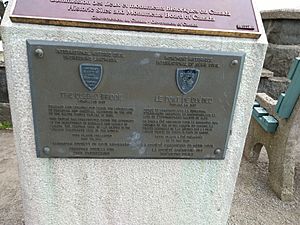 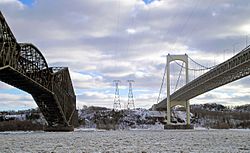 The disaster showed what the power an engineer could have, in a project that was improperly supervised. As one result, Galbraith and others formed around 1925 what are now recognized as organizations of Professional Engineers. P.Engs are under different rules and regulations based on the organization to which they belong. General guidelines include that an engineer must pass an ethical examination, be able to show good character through the use of character witnesses, and have applicable engineering experience (in Canada this constitutes a minimum of four years' practice under a certified Professional Engineer). Moreover, engineers must be registered in the province in which they work. These engineering organizations are regulated by the respective provinces and the title "Professional Engineer" (or "Ingénieur" in Quebec) is reserved only to members who belong to this organization.

On August 29, 2006, a year-long commemoration was begun in the Kahnawake Reserve for the lives of the 33 Mohawk men who died in 1907. One year later, on August 29, 2007, memorial services were held to dedicate a concrete structure displaying the victims' names on the Lévis side of the bridge, and to unveil a steel replica of the bridge in Kahnawake.

All content from Kiddle encyclopedia articles (including the article images and facts) can be freely used under Attribution-ShareAlike license, unless stated otherwise. Cite this article:
Quebec Bridge Facts for Kids. Kiddle Encyclopedia.