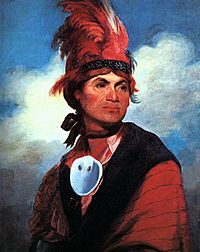 A portrait of a Mohawk person by Gilbert Stuart in 1786

The Mohawk people are the most easterly tribe of the Haudenosaunee, or Iroquois Confederacy. They are an Iroquoian-speaking indigenous people of North America. They had communities in northern New York State and southeastern Canada, mainly around Lake Ontario and the St Lawrence River.

As one of the five original members of the Iroquois League, the Mohawk are known as the Keepers of the Eastern Door.

All content from Kiddle encyclopedia articles (including the article images and facts) can be freely used under Attribution-ShareAlike license, unless stated otherwise. Cite this article:
Mohawk people Facts for Kids. Kiddle Encyclopedia.