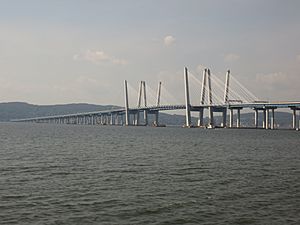 The Tappan Zee Bridge connects South Nyack in Rockland County and Tarrytown in Westchester County across the Hudson River in New York State. The original 1955 bridge was replaced in 2017.

South Nyack is a village incorporated in 1878 in the town of Orangetown in Rockland County, New York, United States. It is located north of Grand View-on-Hudson, northeast of Orangeburg, east of Blauvelt State Park, south of Nyack and west of the Hudson River. The village is the western terminus of the Tappan Zee Bridge. Its population was 3,510 at the 2010 census.

Following the extension of the Northern Branch of The New Jersey Railroad into the area in the mid-19th century, rapid growth ensued. Town government no longer being seen as an effective means of dealing with the area's needs, village incorporation was discussed. Fearing higher taxes, those in what would have become the northern part of Nyack village formed their own municipal corporation first, named Upper Nyack. Nyack village still incorporated, although without this northern portion. Residents in the southern part of Nyack village, however, soon became dissatisfied with the notion of paying taxes that more heavily benefitted the rest of the village. After succeeding in dissolving Nyack's corporation, the southern portion of the former village incorporated as the village of South Nyack. The area between Upper Nyack and South Nyack was reincorporated thereafter, again as Nyack.

The New York State Thruway (Interstate 87) passes through the village after passing over the Tappan Zee Bridge.

There were 1,201 households, out of which 26.9% had children under the age of 18 living with them, 45.1% were married couples living together, 9.2% had a female householder with no husband present, and 42.5% were non-families. 31.3% of all households were made up of individuals, and 8.4% had someone living alone who was 65 years of age or older. The average household size was 2.43 and the average family size was 3.10.

The Nyack Ice House, formerly located at 90 Clinton Avenue, which opened in 1881, producing and delivering blocks of ice to homes, restaurants, bars and stores, was demolished on April 2 and 3, 2008. During the 19th century, the Nyack Ice House was the only ice plant between Englewood, New Jersey and Newburgh, New York. When sold in 1921, production of coal and later oil began at the site and the name changed to "Nyack Ice and Coal Co." In 1965, the business also sold milk and was operated under the original name. Recently, the company sold mostly to ice carvers and supermarkets and supplied the ice for magician David Blaine's stunt in 2000 when he suspended himself in a block of ice over Times Square.

Orangetown Fire Company No. 1, located at 90 Depot Place, was founded in 1834 and was Rockland County's first fire company. Today it is one of eight components of the Nyack Fire Department. The company was unofficially formed in 1832 with 16 members and was organized in 1834. The company still holds in its possession its first apparatus, which dates back to 1749 and survived a fire in the firehouse some years ago. The Orangetown Fire Company No. 1 also serves Upper Nyack and Nyack.

The Village of South Nyack is the western terminus of the Tappan Zee Bridge, which connects the village to Tarrytown in Westchester County. The village is served by the New York State Thruway (in its section concurrent with Interstate 87 and Interstate 287) at Exit 10 (westbound only). Another important arterial roadway serving the village is U.S. Route 9W.

South Nyack was formerly served by the Northern Branch of the Erie Railroad, with service to Pavonia Terminal in Jersey City. The village had its station near the corner of Broadway and Cornelison Avenue. Passenger service was discontinued in 1966, and the right-of-way has been converted into the Raymond G. Esposito Trail.

All content from Kiddle encyclopedia articles (including the article images and facts) can be freely used under Attribution-ShareAlike license, unless stated otherwise. Cite this article:
South Nyack, New York Facts for Kids. Kiddle Encyclopedia.