Kids Encyclopedia Facts
Not to be confused with the town of Orange, New York.

Orangetown is a town in Rockland County, New York, United States, located in the southeastern part of the county. It is northwest of New York City, north of New Jersey, east of the town of Ramapo, south of the town of Clarkstown, and west of the Hudson River. The population was 49,212 at the 2010 census. 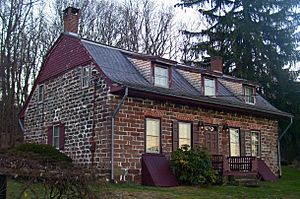 Orangetown was first settled around 1680. The town of Orangetown was the first town formed in Rockland County, after the county was established. The first settlers were Dutch men who purchased a tract of land from the Tappan Indians in 1686; their patent of the same year called the place Orange, but it was also known as Orangetown and Tappan (after the first village). When the state's first twelve counties were established in 1683, the territory that would become Orangetown lay within Orange County. It became part of Rockland County when that county was created in 1798.

Historical material: ORANGETOWN—was formed March 7, 1788, and was named from Orange co., of which it then formed a part. It lies upon the Hudson, in the s. angle of the co. Its surface is broken by abrupt and rocky hills in the E. ; but in the center and w. it spreads out into a rolling or moderately hilly region. The Nyack Hills, extending along the river, are 300 to 500 feet high, with steep, rocky declivities upon the E., but more gradual slopes upon the w.2 Their summits are rocky and covered with alight growth of forest trees. Snake Hill, in the N.E. corner, upon the line of Clarks- town, is one of the principal peaks. The principal stream is Hackensack River, flowing S. through the W. part. Pascack Creek flows through the extreme W. angle, and Spar Kil is a tributary of the Hudson. Near the N. line are several bog or peat meadows, generally well drained and under cultivation. The red sandstone which crops out on the E. declivities of the hills, within a few rods of the river, between Piermont and Nyack, is extensively quarried and exported for building stone. The soil is a reddish, sandy loam intermixed with clay. Fruit growing and furnishing milk for the New York market have become leading pursuits. Nyack, (p.v.,) upon the Hudson, in the N.E. corner of the town, contains 5 churches, 5 shoe manufactories,4 a steam tub and pail factory, the Rockland Female Institute, and a private academy. Pop. 1,458. Piermont, (p.v.,) upon the Hudson, in the S. part, was incorp. May 21, 1850. It is the E. terminus of the Piermont Branch of the N. Y. & Erie R. R.,—the one over which the freight is carried. Nearly the whole business of the place is connected with the R.R. establishment. A pier 1 mi. long has been built into the river, where the freight is transferred to and from the ears and barges in the river. Upon each end of the pier are extensive offices for the transaction of the busi- ness of the road. At this place the R.R. co. also have a large iron foundery and extensive repair shops. Pop. 2,204. Tappantown, (p. v.,) near the N. J. line, contains 2 churches and 30 dwellings. This place was the scene of the trial of Andre, and for a time in 1780 was the head- quarters of Gen. Washington. Kocliland, (Palisades p.o.,) upon the Hudson, in the S. part of the town, contains 3 churches and 40 dwellings. Orange Mills, Middletown, and Blauveltville, (p. o.,) a station on the N. Y. & E. R. R., are hamlets. The first settlement is supposed to have been made by the Dutch, as early as 1680. The first church (Ref. Prot. D.) was formed Oct. 24, 1694; and the first preacher was Rev. Guilllam Bartholf. The first church edifice was erected in 1716. There are 16 churches in town.

The Orangetown Resolutions, a protest of the imposition of duties and the closing of the port of Boston by the British Parliament, were passed in Tappan on July 4, 1774, a precursor of the American Revolution. 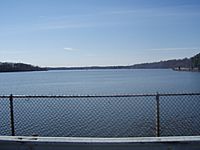 Education in the city is provided by the South Orangetown Central School District.

All content from Kiddle encyclopedia articles (including the article images and facts) can be freely used under Attribution-ShareAlike license, unless stated otherwise. Cite this article:
Orangetown, New York Facts for Kids. Kiddle Encyclopedia.