Nyack is a village located primarily in the town of Orangetown in Rockland County, New York, United States. Incorporated in 1872, it retains a very small western section in Clarkstown. It is a suburb of New York City lying approximately 15 miles (24 km) north of the Manhattan boundary near the west bank of the Hudson River, situated north of South Nyack, east of Central Nyack, south of Upper Nyack, and southeast of Valley Cottage.

Nyack is one of five southeastern Rockland County villages and hamlets that constitute "The Nyacks" – Nyack, Central Nyack, South Nyack, Upper Nyack and West Nyack. Named after the Native Americans who resided there before European colonization, the village consists mostly of low-rise buildings lying on the hilly terrain that meets the western shore of the Hudson River. Adjacent South Nyack is the western terminus of the Tappan Zee Bridge, connected across the Hudson River to Tarrytown in Westchester County by U.S. Interstate 87, an important commuter artery.

The village is approximately 1.6 square miles (4.1 km2) in area, over 50% of which falls within the Hudson River. It is in the Nyack School District. 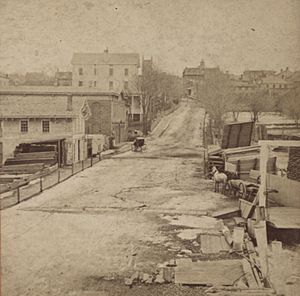 Native American stone relics and oyster middens found along the shore of the Hudson indicate today's Nyack was a favorite pre-Colonial fishing spot. The first Europeans settled in there in 1675, calling the general area "Tappan".

Harman Douwenszen is thought to be the first white settler. He came to America as a toddler and grew up in Bergen, New Jersey. In the State Archives in Albany there is a 1687 letter on file petitioning Governor Dongan to buy a strip of land in the west hills of Tappan (today Nyack), in which he had lived on for 12 years. His partition was granted and he bought the land from the Native Americans. He called his farm New Orania (Oranje in Dutch). This section of Nyack became known as Orangetown in 1683. The Tappan Register of 1707 claimed it was pronounced Nay-ack. Nyack became part of Rockland County in 1798. Harman's younger brother Theius changed the family name from Douwse (Frisian dialect for first son) to Talma proper Dutch for first son. His children became Talman and eventually Tallmans. The New Orania farm became the Tallman homestead, at the northeast corner of what is now Broadway and Tallman Place. The building was demolished in 1914.

The humble Peticon of Harman Dowse of Tappan Neare Ye River Side, Alias New Orania farm ... your peticonr is a farmer that hath nothing wot comes by his hard labour but by God's Blessing out ye Produce and ye ground, and hath a family to provide for. 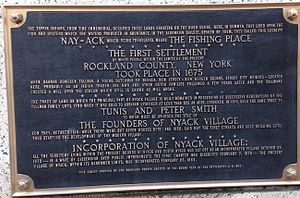 Photo of a Nyack, NY history plaque, mounted on the Burd Street side of the bank building located on South Broadway & Burd Street in Nyack, NY. The inscription says "Nay-ACK, which being translated means THE FISHING PLACE...The First Settlement ...Rockland County, NY...took place in 1675."

On the north wall of the Key Bank building at South Broadway and Burd Street in Nyack is a plaque installed in 1938 that reads:

The Tappan Indians, from time immemorial, occupied these lands fronting the river shore. Here, in summer they lived upon fish and oysters. In Algonkian dialect spoken by them they called this location NAY-ACK which means the fishing place. The first settlement of white people within the limits of the present Rockland County, New York, took place in 1675 when Harmen Dowesen (Tallman), a young Dutchman of Bergen, New Jersey relocated here.

The Tallmans erected a mill upon a stream which still is known as Mill Brook. Abraham Lydecker purchased land from the Tallmans when there were but seven homes in Nyack in 1813. Nyack became an incorporated village in 1872 according to the same plaque on the Midland Trust Building.

Following the extension of the Northern Railroad of New Jersey into the community in the mid-19th century, rapid growth ensued. Because town government was no longer seen as an effective way to deal with the community's needs, village incorporation was discussed. Fearing higher taxes, those in what would have become the northern part of Nyack village formed their own municipal corporation first, named Upper Nyack. Nyack village was incorporated, although without this northern portion. Residents in the southern part of Nyack village, however, soon became dissatisfied with the notion of paying taxes that more heavily benefited the rest of the village. After succeeding in dissolving Nyack's corporation, the southern portion of the former village incorporated as the village of South Nyack. The area between Upper Nyack and South Nyack was reincorporated thereafter, again as Nyack.

Throughout the 18th century and 19th centuries, Nyack was known for its shipbuilding and was the commercial center of Rockland County. In the 19th century, a number of factories manufactured shoes. The Erie Railroad connected with Jersey City, New Jersey, where ferries took passengers to Chambers Street, New York City, until it was discontinued in 1966. With the completion of the Tappan Zee Bridge in December 1955, connecting South Nyack with Tarrytown in Westchester County, the population increased and Nyack's commercial sector expanded. 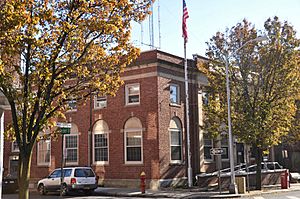 In the 1980s, the village underwent a major urban revitalization project to commercialize the downtown area and to expand its economy. The Helen Hayes Theatre was built, and the downtown area became home to many new business establishments.

In 1991 the landmark court case Stambovsky v. Ackley ruled that a house at 1 LaVeta Place on the Hudson River was legally haunted and that the owner (but not the real estate agent) was required to disclose that to prospective buyers. The owner, Helen Ackley, earlier had organized haunted house tours and was party to an article about it in Reader's Digest. After Ackley sold the house to another buyer there were no subsequent reports of hauntings.

On August 10, 2010, Highland Hose Company No. 5, a two-story brick firehouse located at 288 Main Street, celebrated 100 years at the firehouse. The firehouse was built in 1910 – fifteen years after Highland Hose was founded. The company's 1949 Ahrens-Fox fire engine was polished to bright, gleaming red and is still in use after more than 50 years. 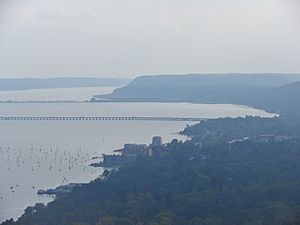 View of Nyack from Hook Mountain

Nyack is on the west bank of the Hudson River, north of the Tappan Zee Bridge. The village is also home to Hook Mountain and has hilly terrains especially along the shore of the river.

Nyack is located along the New York State Thruway, in its concurrent section with Interstate 87 and Interstate 287, just to the north of the Tappan Zee Bridge, now officially named the Governor Mario M. Cuomo Bridge. Other important arterial roadways include U.S. Route 9W and New York State Route 59. 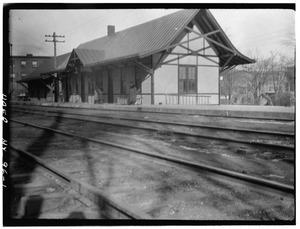 Nyack was formerly served by the Northern Branch of the Erie Railroad, with service to Pavonia Terminal in Jersey City. (The southern terminus was shifted to Hoboken in 1958 and the Erie Lackawanna operated the train after 1960.) Passenger service was discontinued in 1966, and the rail line has been converted into a walking path. As a result, Nyack no longer has direct passenger rail service. The nearest railroad stations with current passenger service are Tarrytown 8 miles away and Nanuet 5.8 miles away.

Nyack is served by the Lower Hudson Transit Link (known colloquially as Hudson Link), which connects Nyack with rail stations in Tarrytown and White Plains. The bus station is located adjacent to the municipal parking lot on Artopee Way. Nyack is also served by Rockland Coaches 9T buses to the Port Authority Bus Terminal and 9A buses to the George Washington Bridge Bus Terminal in New York City. The Rockland Coaches main bus stop is located at the intersection of South Broadway and Cedar Hill Avenue. A secondary stop is located at the intersection of Midland Avenue and Castle Heights Avenue. Local bus transit is provided by Transport of Rockland. 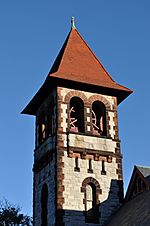 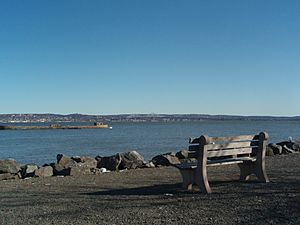 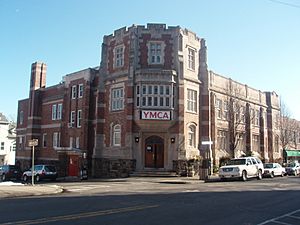 Nyack Public Schools serves Nyack. Nyack High School is the village's high school. Nyack was also home to Nyack College, a Christian liberal arts college and one of the four colleges in the United States affiliated with the Christian and Missionary Alliance church.

All content from Kiddle encyclopedia articles (including the article images and facts) can be freely used under Attribution-ShareAlike license, unless stated otherwise. Cite this article:
Nyack, New York Facts for Kids. Kiddle Encyclopedia.