Kids Encyclopedia Facts
This page is about the newly constructed bridge spanning the Hudson River. For the old bridge it replaced, see Tappan Zee Bridge (1955–2017).

The Governor Mario M. Cuomo Bridge, commonly referred to as the Tappan Zee Bridge, is a twin cable-stayed bridge spanning the Hudson River between Tarrytown and Nyack in the U.S. state of New York. It was built to replace the original Tappan Zee Bridge, which was located just to the south. The new bridge's north span carries the northbound and westbound automobile traffic of the New York State Thruway, Interstate 87 (I-87) and I-287; it also carries a shared use path for bicycles and pedestrians. The south span carries southbound and eastbound automobile traffic.

The process to replace the original bridge kicked off in 2012, and Tappan Zee Constructors began construction on the new spans in 2013. The Left Coast Lifter (one of the world's biggest cranes) was instrumental in the construction of the bridge. The north span officially opened to westbound traffic on August 26, 2017, and eastbound traffic temporarily began using the north span on October 6, 2017. Tappan Zee Constructors then began demolishing the old bridge. An opening ceremony for the south span was held on September 7, 2018, and traffic started using the new span three days later.

The bridge's official name, commemorating former New York Governor Mario Cuomo, has been controversial since its announcement. A petition and proposed legislation have opposed the attachment of Mario Cuomo's name to the bridge.

The Tappan Zee river crossing was named by 17th century Dutch settlers. The Tappan Zee Bridge and the smaller Bear Mountain Bridge are the only crossings of the stretch of the Hudson between Westchester and Rockland counties.

The original Tappan Zee Bridge was a cantilever bridge built from 1952 to 1955. The bridge was 3 miles (4.8 km) long and spanned the Hudson at its second-widest point. It was the longest bridge in New York State, at a length of 16,013 feet (4,881 m) including approaches. Built immediately after the Korean War, the bridge had a low construction budget of only $81 million and a designed life-span of only 50 years. During its first decade, the bridge carried fewer than 40,000 vehicles per day.

By the 2000s, the bridge was "decaying" and "overburdened". The deteriorating structure bore an average of 140,000 vehicles per day, substantially more traffic than its designed capacity. The collapse of Minnesota's I-35W Mississippi River bridge in 2007 raised worries about the Tappan Zee Bridge's structural integrity. These concerns, together with traffic overcapacity and increased maintenance costs, escalated the serious discussions already ongoing about replacing the Tappan Zee with a tunnel or a new bridge. Six options were identified and submitted for project study and environmental review. 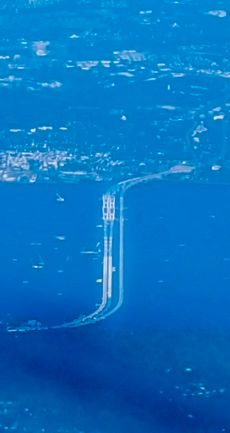 The Federal Highway Administration issued a report in October 2011 designating the Tappan Zee's replacement to be a dual-span twin bridge. The new bridge was built a few yards to the north of the existing bridge, and connects to the existing highway approaches of the New York State Thruway (I-87/I-287) on both river banks. The New York State Thruway Authority requested design proposals from four companies in 2012 and eventually received three project proposals. The authority awarded a $3.142 billion contract to Tappan Zee Constructors (TZC), whose proposal was not only the least expensive but also promised the shortest construction timeline and included plans to minimize environmental impact. Construction began as scheduled in October 2013, with completion targeted for 2017.

Originally, some motorists thought that bridge tolls could more than double (to $12-$15 for automobiles, eastbound only), rising to those of New York City's Hudson River crossings. However, the state passed legislation freezing the toll on the bridge at $5 through 2020 in its 2016 legislative session.

The new Tappan Zee Bridge was proposed to include four vehicle lanes on each span, for a total of eight lanes, as well as a shared-use bicycle and pedestrian path. Like its predecessor, the new Tappan Zee Bridge is to be administered by the New York State Thruway Authority. The authority is the project co-sponsor, along with the state Department of Transportation.

The New York Metropolitan Transportation Council added the Tappan Zee Bridge to its list of projects eligible for federal funds in August 2012. The United States Department of Transportation approved the plan on September 25, 2012. The approval process took fewer than 10 months as opposed to the traditional multi-year process as a result of being placed on a "fast track" for approval by the Obama Administration. On December 17, 2012, New York state officials dropped their proposal for a 45 percent increase on the state Thruway toll for trucks, while advancing a $3.14 billion project to replace the bridge. The project was funded through a public-private partnership. 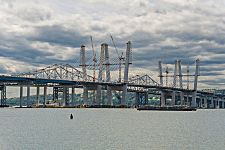 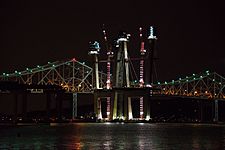 The new Tappan Zee Bridge was designed and built by Tappan Zee Constructors, LLC (TZC) consortium of design, engineering, and construction firms including Fluor Corporation, American Bridge Company, Granite Construction Northeast and Traylor Bros. The Left Coast Lifter was used to install groups of pre-assembled girders one full span at a time. By the end of 2013, General Electric had completed four seasons of dredging to remove contaminants from the river bottom. Approximately 70 percent of the sediments targeted for dredging were removed (totaling more than 1,900,000 cubic yards (1,500,000 m3) of sediment).

On July 19, 2016, a crane used for the construction of the bridge collapsed onto the existing older bridge. Five people were injured, including three drivers and two bridge workers; no one was killed or critically injured. 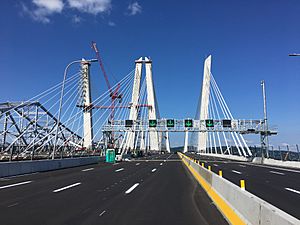 Deck of the new Tappan Zee Bridge, one week before its official opening

Upon completion, the new Tappan Zee Bridge became one of the widest cable-stayed bridges in the world, having a combined width across both decks of 183 feet (56 m). The new spans equal the width of the relatively short-span, cable-stayed Leonard Zakim Bridge in Boston. Turkey's 3rd Bosphorus bridge, completed in 2016, has a single deck about 192 feet (59 m) wide. The bridge is intended to last at least 100 years.

The demolition of the old bridge started in November 2017 with the removal of the first steel section from the Rockland County approach. The work continued to April 2018 including the removal of the truss sections. In May 2018, the 10-million-pound main span was removed, leaving only the east and west approaches. The original plan was to complete the remaining demolition by taking down spans piece by piece in order to minimize the environmental impacts. However, when the instability of the eastern span was discovered in September 2018, it was decided to destroy it outright. The explosive demolition of the eastern approach took place on January 15, 2019, while the western approach was lowered onto a barge on May 12, 2019 and hauled away.

The Tappan Zee Bridge charges tolls in the southbound/eastbound direction only. On weekdays, tolls are variable based on the New York State Thruway's vehicle classification system and the time of day, and are collected using a cashless toll system. On weekends, each vehicle class pays a flat rate. E-ZPass users pay the lowest rate possible, the rate normally charged from 12:00 midnight to 6:14 a.m., while other users are charged using the highest rate possible, the rate normally charged from 7:00 a.m. to 8:59 a.m. Class 2L vehicles, which have a height of less than 7.5 feet (2.3 m) and contain two axles, pay a flat rate of $6.83 at all times, $5.25 with a New York-issued E-ZPass, or $6.04 with an out-of-state E-ZPass.

On June 15, 2020, the bicycle-pedestrian path on the northern span of the bridge opened. This path connects the towns of Tarrytown and South Nyack. The entire path measures 3.6 miles (5.8 km) in length. It has visitor centers at each end, named after the counties of Rockland and Westchester. Both of these contain restrooms, brochures, and interactive displays. The Westchester visitor center also has vendors that operate daily. The path is split into two lanes with bikes on the east and pedestrians on the west. The path has six scenic overlooks known as "belvederes." Each belvedere is named after a local point of interest and provides Wi-Fi, a seating area, bike racks (on most), infomational kiosks, and trash cans. The path also contains LED displays for warning messages.

The bridge is equipped with LED lights for the roadways and structures. The lights can be changed to a variety of colors for decorative purposes on major holidays such as Memorial Day and Christmas, traditional dates such as Mother's Day, Father's Day and St. Patrick's Day, and special commemorations throughout the year. The lighting system reputedly has the ability to be synced to music, although it has yet to be demonstrated.

The Hudson Link BRT runs the HO3, HO5, HO7, and HO7X across the bridge. In the summer months Hudson Link also runs free shuttle buses on the route of the HO7 bus. Responding to widespread concerns about the lack of new public transit services, bridge planners agreed only to build one "dedicated express bus lane" in each direction for use during rush hour. Construction on the new bridge's bus lanes finished in 2020, leaving one bus lane in each direction. The bridge was also structurally built for expansion with commuter rail at a later date. The existing Tarrytown station of the Metro-North Railroad's Hudson Line is located about 2,000 feet (610 m) from the new bridge's eastern landing.

Governor Andrew Cuomo was successful in passing legislation to name the bridge after his late father, former Governor Mario Cuomo, on June 29, 2017. This has been met with significant opposition from residents of nearby localities. Many, including the daughter of former New York Governor Malcolm Wilson (whose name was on the original Tappan Zee Bridge), were vocal in their opposition to the name change. A Reclaim New York Initiative poll of Rockland and Westchester county residents found only 14.7% of respondents supported the new name. As of November 29, 2017, over 100,000 people had signed a Change.org petition called "Return the Cuomo Bridge its original name: The Tappan Zee. That bridge is our history." Despite the official name, "Tappan Zee Bridge" remains a common name for the structure.

On December 6, 2017, State Assemblyman Kevin Byrne, a Republican from Mahopac in Putnam County, announced that he would introduce legislation to revert the name of the bridge to the "Malcolm Wilson Tappan Zee Bridge". The old Tappan Zee Bridge had been named for Wilson from 1994 to June 2017. A compromise bill to rename the bridge the "Governor Mario M. Cuomo Tappan Zee Bridge" was later introduced and sponsored by both Senate Deputy Majority Leader John DeFrancisco (R) and Assemblyman Byrne. On June 20, 2018, the State Senate voted 40–20 in favor of renaming the bridge. However, the effort failed after the Assembly's legislative session ended without the bill being put to a vote.

All content from Kiddle encyclopedia articles (including the article images and facts) can be freely used under Attribution-ShareAlike license, unless stated otherwise. Cite this article:
Tappan Zee Bridge (2017–present) Facts for Kids. Kiddle Encyclopedia.