Helen Hayes Brown (October 10, 1900 – March 17, 1993) was an American actress. Her career lasted for almost 70 years. Known as the "First Lady of the American Theatre", she is one of only thirteen people to win all four main American entertainment awards - Emmy, Grammy, Oscar and Tony. Hayes also received the Presidential Medal of Freedom in 1986, the National Medal of Arts in 1988 and was awarded at the Kennedy Center Honors in 1981. Two Broadway theaters are named after her.

Helen Hayes was born in Washington D.C. on October 10, 1890. She was an only child. Her mother, Catherine Estelle Hayes, was an actress of Irish ancestry. Her father, Francis van Arnum Brown, was a meat salesman.

Helen was an accomplished child. She went to a dancing school and sang very well. She began a stage career at the age of five, pushed by her mother. She also took her mother's maiden name as her stage name. By the age of ten, she had made a short movie. In 1917 Helen graduated from the Academy of the Sacred Heart Convent in Washington.

Her first sound movie The Sin of Madelon Claudet (1931) brought her Academy Award for Best Actress. The part she played in it was written by her husband, Charles MacArthur. Among her other successful movies of that time were Arrowsmith (1931), A Farewell to Arms (1932), What Every Woman Knows (1934).

Hayes liked working in theatre. Her most famous performance on Broadway was the role of Queen Victoria in a play Victoria Regina (1938). She played leading parts in Coquette (1928) and Mary Of Scotland (1933) as well. Harvey (1970) became her last hit on stage. Helen had to retire from theatre because of her asthma condition.

She continued her work in movies. Hayes won her second Academy Award in 1970 for Airport. This time for Supporting role. During the later part of her career she was often in series and movies made for television. She successfully portrayed legendary character Miss Marple in several movies in 80s. 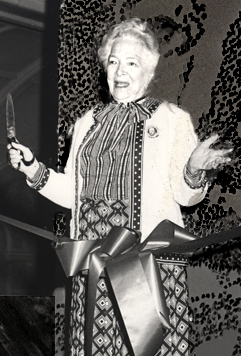 Helen Hayes met her husband, Charles MacArthur, a playwright, in 1927. They married in August of 1928. They had a daughter, Mary, born in 1930. She became involved in acting, but, sadly, died from polio at the age of 19. It was a great tragedy for them. In 1938 Helen and Charles adopted a son, James MacArthur, who grew up to be an actor.

Charles MacArthur died in 1956. He had many years of illness and grief caused by his daughter's untimely death. Hayes never married again.

Helen Hayes died on March 17, 1993 from heart failure in the hospital of Nyack, New York. She was 92. She was buried in the Oak Hill Cemetery, next to her husband and daughter.

All content from Kiddle encyclopedia articles (including the article images and facts) can be freely used under Attribution-ShareAlike license, unless stated otherwise. Cite this article:
Helen Hayes Facts for Kids. Kiddle Encyclopedia.